The place to discuss your hardware and software/firmware modifications...
Post Reply
120 posts

upgrade complete...finally got it all in cases...and actually using it for real work - no longer a dust collecting paperweight
though there's still dust on it have to clean off

included a pic of the end result.

while I was at it, I changed the electronics fan to the side, were it will not be sucking hot air in from the HBP.

I access the sd card via the usb or via the web interface, so I don't ever remove it anymore.
I can start and monitor prints via web, usb (using s3d), or through the GLCD. and can upload prints via web , usb, or sd.

mostly I just use the GLCD now to do kick off print jobs and monitor.
(ya know ... I can monitor and control from my iphone... that's kind of funny)

i'll be adding auto leveling when the parts come in, going a completely different direction then what is being done here. 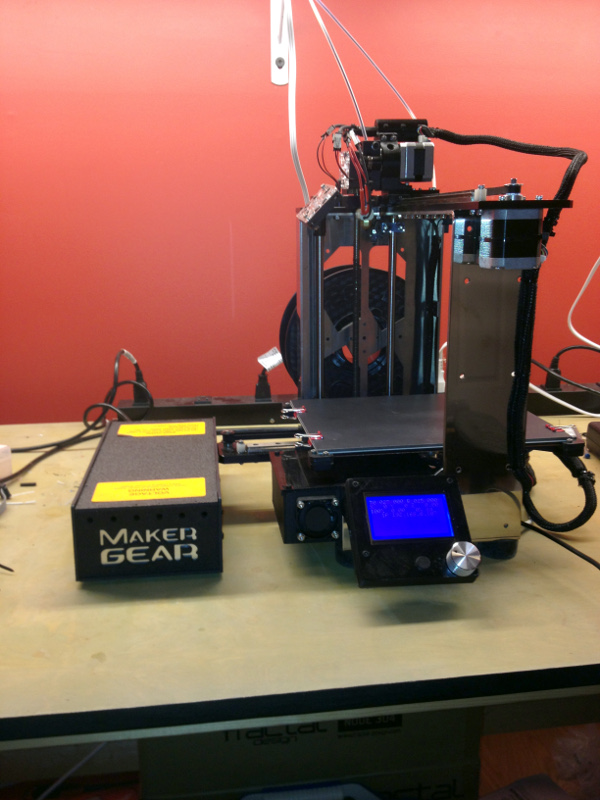 innkeeper wrote:I noticed Tim has all current settings to 1.5A - seems like those were the default values and a bit high for at least the extruder.
Tim, was this intentional?

I couln't find info data or model numbers for any stepper but the extruder, maybe somone post model numbers of the steppers for X Y and Z axis?
or the specs for each if the models are unavailable.

I could find was the extruder stepper which is 42BYGH243-5

I was on vacation for a few weeks, so now I can finally get around to analyzing this. . .

It's difficult to find part numbers for these motors. One of my extruder motors (not sure if it's the original or the new one that came with the dual upgrade) has an actual label on it identifying it as Kysan P/N 1040222, which is a Kysan 42BYGH243-5 (as you pointed out). The data sheet clearly states this is a 1.0A rated motor.

But. . . I'm not a mechanical engineer, and certainly not an expert on stepper motors. The more I look into it, the more complicated it looks.

The number in the Kysan data sheet says the 1.0A rating is "current per phase". From the data sheet and other sources, I gather that because this is a bipolar motor, there are two windings, and that the total current is therefore 2.0A. But the two phases are offset, and the stepper motor driver indicates that they are almost completely out of phase with each other, so the total current at any moment in time is still about 1.0A, and relatively constant. I checked the Vref on the Allegro A4982 stepper driver (which is set to deliver 1.5A in my as-yet-uncorrected firmware config file), and it's sitting at 0.56V. The maximum instantaneous current according to the A4982 data sheet is (Vref / (8 * Rs)), where Rs is the sense resistor, and the Smoothieboard schematic shows Rs = 0.05 ohm. So a Vref of 0.56V corresponds to a maximum current of 1.4A. That suggests that the Smoothieware may be derating the current a bit to avoid overdrive. That's all glommed together into a factor used to calculate the digipot value from the specified current in the config file. It appears to all be more or less correct. By specifying 1.5A, I'm overdriving the motor, but on the other hand, the 2.6V-rated motor is running at 0.56V, which is why 1.5A is not killing it, but only making it a bit warmer than otherwise.

My conclusion is that (1) yes, the extruder motor should be set to 1.0A; (2) Setting it to 1.5A is wrong and should be changed, but at least isn't harming the motor; (3) The smoothieware appears to be derating the current, so there is no particular need to derate the value in the config file.

I have no identifying marks on my Z leadscrew motor, which is kind of problematic, because Kysan offers a large number of these motors in varying current ratings. It appears, though, that (mostly) they come in two basic forms, which is 0.4A at 30 ohms winding resistance and 1.5A at 2.8 ohms winding resistance. (Note that the older model M2s used the 30 ohms motors; they were replaced a few years ago with the 2.8 ohm motors.) Although it appears to be impossible to figure out what the motor model number is, it's easy to read the resistance across the windings and so conclude that the motor is rated at 1.5A. The weird thing is that the Kysan list of motors suggests that all of the 1.5A motors are 48mm tall (the same as the X and Y motors) and that all the 34mm high motors are 0.4A/30 ohms. Of course, it may not be a Kysan.

One interesting thing I came across: The extruder motor is a 1:5.2 step-down, while all the firmware calculations assume 1:5. There is a comment on
http://makergear.wikidot.com/m2-technical-guide that notes the error. It says that the steps/mm value should be 488.547 but is set to 471.57 in the firmware (based on the simple but incorrect 1:5 ratio). In other words, the extruder is always running a little faster than the firmware thinks it is, leading to slight over-extrusion, leading to a persistent need to correct for the over-extrusion by setting the extruder multiplier less than one. I have always maintained that this was a systematic error resulting from an incorrect calculation. I'm going to try re-calibrating the extruder multiplier with the extruder motor steps/mm set to 488.55 and see what I get. . .
Top

Tim here's how you tell if the motor current is too high:

Is the motor really hot? yes? current's too high. No need for the rest of that sciencey gobbledygook.

insta wrote:No need for the rest of that sciencey gobbledygook.

Normally, I really am a "by the seat of my pants" engineer. Occasionally, though, I want to know exactly why I'm doing something a particular way; only then do I get into the nitty-gritty details. If it bores you, you don't have to read it.

Is the motor really hot? yes? current's too high. No need for the rest of that sciencey gobbledygook.

Define really hot. I have stepper motors running at 80 degrees C (not on an M2). All within manufacturer's spec.
Top

lem wrote:Define really hot. I have stepper motors running at 80 degrees C (not on an M2). All within manufacturer's spec.

I'd call that too hot. I had one of the original M2 Z-axis steppers, which ran "uncomfortably hot", which I would guess was somewhere in the range of 70 to 80 degrees C, and it shortened the lifetime of the motor to 2 years of light-to-moderate use. You can read the whole rundown on Ed Nisley's softsolder.com website, but it comes down to the fact that the 30 ohm winding motors are not designed to hold up a big weight. Which I find odd, because the hefty lead screw and large brass nut suggest that they're industrial-strength.
Top

yeah i have checked mine during a long print. the extruder is 60c. the x and y run around 40c and the z is barely warm
Top

Excellent detective work Tim. my x, y and z motors have no tags on them. so that's great information.

I am very interested what your calibration says for the extruder.

my Z stepper is measuring 28.5 ohms......so I have one of the older .4A / 30 ohm ones...it did run ridiculously hot when on the rambo (never measured it, but I couldn't keep my finger on it).. but since smoothie I have been running it at .7a so it is not nearly as hot. I am assuming its not dead because the chassis its acting as a heat sink. - but it is still then running way over spec.

I'm not immediately concerned with the z stepper as the temps are lower then with merlin/Rambo.
I am going to be playing with a new auto bed leveling scheme, so its going to be a bit more active... I''ll be looking to upgrade it..perhaps to what Ed Nisley's used on his softsolder.com posting

in general, have say smoothie has been pretty glitch less since my last config change .... been printing abs pla, and now petg.
probably have ran a total of a full spool worth though it, and only one jam that was self inflicted, and almost all good prints.

My only complaints are with S3d being a bit glitchy with smoothie. the glitches are when you try to control prints from s3d. so in general, I don't sue it for that, only slicing.
ponterface has no problems with smoothie...also the glcd works flawless also, so 90% of the time I push up to the sd card and start the print from the glcd

I did notice something that I haven't searched yet on the forums, so might post a separate topic if its not already talked about...... I measured the play vertically on the spider assembly, at the points farthest from the z stepper and I am getting ~.5mm up and down and .1 axially.

I checked this because noticed the build plate vibrations as I upped the speed, Tim, th8ink you mentioned something about this earlier also. . I don't see this on my other printers but they have two linear rails on the x and y axis and 2 on the z with 4 bearings. and I have almost unmeasurable play (though they have other issues when trying to run them faster) I have to think this has to be a major factor in quality of prints at increased speeds. is this generally the same with all m2's and if so has anyone tried to address it?

what I usually see when increasing speeds with other bots is, the whole bot shakes and the chassis or the supporting structures itself becomes the week link.. this is not the case with m2 though, the chassis is a tank...so I feel it has the potential to do high quality at faster speeds.. if I can get by the issues with the play seen at the build plate. I've almost consider building a damper system for it...or simply adding mass to the ends of the spider assembly to reduce vertical vibrations.
I know I can lower the initial speed for acceleration lowered, and play with the jerk settings and so on, but that's not going to fix the play.
M2 - MKS SBase w Smoothieware, GLCD, 24v, Upg Z & extruder stepper - IR bed leveling, Astrosyn dampers X/Y/Z, MIC 6, Zebra, PEI, & glass Build Plates - E3D, V3B Hotends, & more - many other 3d printers - production printing.
Top

I have always wanted to mirror the m2 left side to the right and run dual z rods. I see the same thing as you and it is a limiting factor on speed and quality. On small prints as the mass is less it obviously is less noticeable . I have one print in particular that is build plate size almost and 7 inches tall it really shows the problem quite clearly. I have thought about bigger z rods ...but have not looked at the deflection specs on them yet.
Print Feed
Top

innkeeper wrote:has anyone tried to address it?

The springs have zero damping and the platform weighs the better part of a kilogram, so there's a distinct tendency to flop around atop those springs (before the screw heads reseat themselves) under high acceleration. The silicone pads provide a rigid mount with good damping: all those problems Go Away.

Reducing the XY acceleration (by factors-of-two, not by piddly 10% increments) dramatically improves the results without much of a speed penalty, because most XY motions are so short that the motors never reach full speed anyhow.

The rheology of ordinary plastics, PETG in particular, sets a fairly low limit on printing speeds, so there's really not much benefit in hotrodding the machinery. The crowd around the table at demos loves fast non-printing moves, but squeezing plastic through a tiny nozzle doesn't happen quickly...
--
Ed
http://softsolder.com
Top
Post Reply
120 posts