I was thinking that due to the relatively low power needed to operate the fan, it might work. Ah well, but now I know.

Thanks Jin!
I'm finally back to where I started two days ago!

The "relatively low" must be in relation to the resistors.

To make the fan current "relatively small", you'd want the ratio to go the other way, but a resistor string drawing 12 A from the supply to get the right voltage for a 120 mA fan wouldn't work the way you want... [grin]

Which is why those cheap buck and boost supplies from eBay make so much sense. You get exactly the right voltage for the fan (or LEDs or whatever) with good regulation, minus all the aggravation, from whatever power supply you have.
--
Ed
http://softsolder.com
Top

Well, I have modded my extruder head fans, power supply fan, and added dampers to my X and Y motors.

Holy crap! I keep forgetting this thing is on. It is super quiet.

Power supply mod for Noctua 60mm fan. This is the first mod you should install, just change a connector and swap it. It is a huge reduction in noise vs. the stock fan. You don't have to mod the case like I did, but it helps keep the air flowing through. 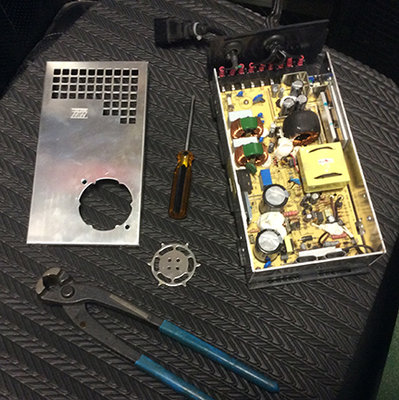 Cut out the fan guard. This is a huge restriction point. The fan stays covered by the MG case. 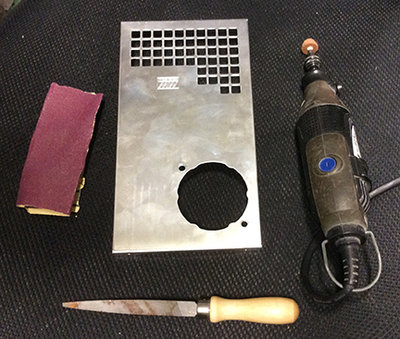 Clean up your cut so no mess gets in the power supply. 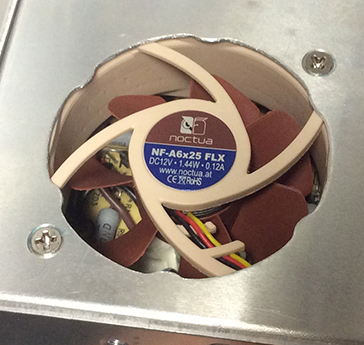 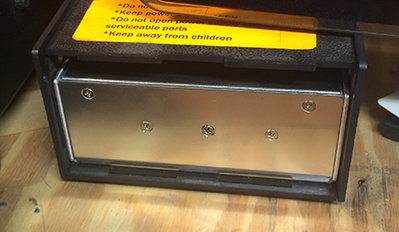 Here is the new fan mount and duct. STL file available on Thingiverse. As suggested, I used a 24v to 12v buck converter I purchased for R/C use to run the 40mm bed fan. 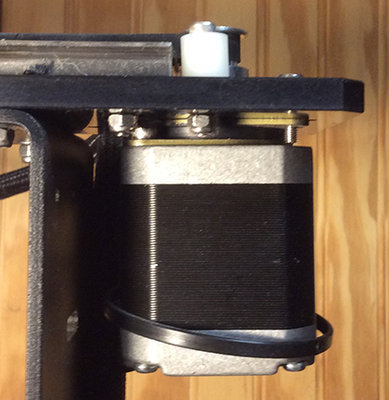 My fan mods - I've had my M2 for just under a month. My approach to quieting the fans was to replace them with larger fans that run slower. Both the bed fan and the electronics fans were replaced with 80mmx15mm thick 24V fans. I just bought cheapo fans on eBay. 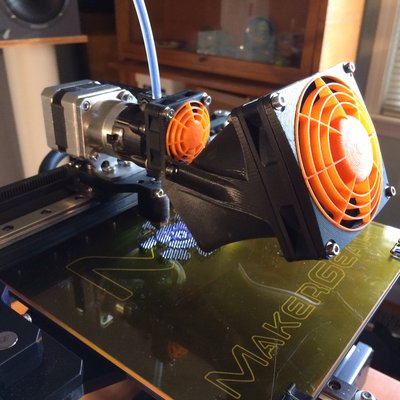 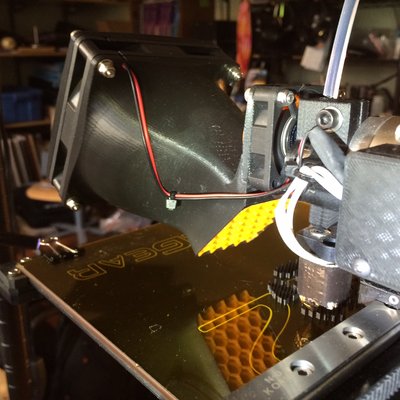 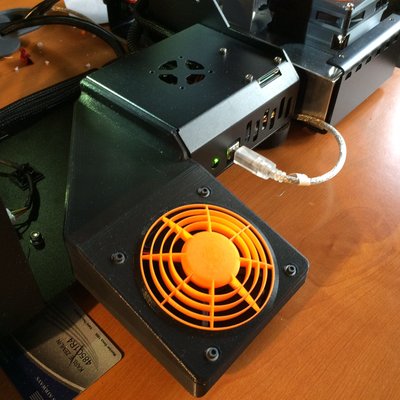 I also put a 12V 80mm fan on the power supply - this is just stuck on top of the internal enclosure with a simple adapter I printed out - I used two of the 120 ohm resistors in parallel to slow this fan. I will relocate this one for sure once I can cut metal on this machine.
Top

Does the electronics box even need a fan? There's nothing with a heat sink that I can see, and the tangle of cables means airflow is going to suck anyway.

(I ask 'cause the lone 40mm "quiet" fan I had laying around actually sounds like a little banshee, and I thought I'd check before ordering the Noctuas...)
Top

I do recall dimly a post from MG (Rick?) that the electronics box fan was mostly superfluous. I'd guess it serves mainly to split the 24V. Presumably two 12V fans are cheaper or easier to source than one 24V fan?
Top

Hm. If it's to "split the 24V", does that mean running without the fan-- I.e. simply unplugging it-- would be a Bad Thing?
Top

It splits the 24 volts between the two 12 volt fans (Extruder and the Electronics box fans). If you unplug it you lose the extruder fan too (not recommended if you run a V3B extruder you can only do that with the V4.) I've been running for quite awhile without the extruder fan but I did put a 24volt fan in the electronics box. I think insta has been testing running without either but you'll have to see if he chimes in on that to see how it's been going.