by dramsey
Although...hmm...I do have a V4 hotend, and running without the extruder fan intrigues me. There seems to be a good physical heat break between the extruder and the hot end; on the other hand, I'd think that the extruder could still get toasty on multi-hour prints...

by insta
This is my current attempt. No fan on the RAMBo either. The heatsinks seem necessary on the extruder motors... 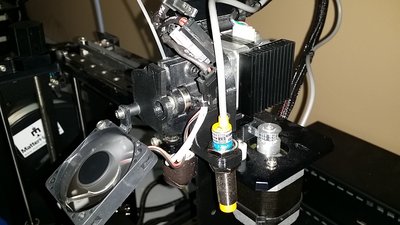 by dramsey
Where you have a heat sink on the extruder stepper, I have a large electrical connection block that looks as though it would be an immense pain to relocate...

How many fan-less prints have you done?

dramsey wrote:Where you have a heat sink on the extruder stepper, I have a large electrical connection block that looks as though it would be an immense pain to relocate...

How many fan-less prints have you done?

You must have the new metal motor mount. These machines are running the inductive probes, and therefore the old ABS motor mounts that're modified to hold the probes.

I've done about 25 prints across all my fanless M2s, had a serious PLA jam once, but several other successful PLA prints. Every other filament has been fine.

It splits the 24 volts between the two 12 volt fans (Extruder and the Electronics box fans). If you unplug it you lose the extruder fan too (not recommended if you run a V3B extruder you can only do that with the V4.)

Hm. I unplugged the Rambo fan while a print was running, and the extruder fan appeared to be unaffected: it continued running with no obvious change in speed or tone.

I plugged the Rambo fan back in after a few second in case unplugging it was putting 24V through the extruder fan. But had that been the case, I would have expected some audible effect...

[UPDATE] Simple solution: unplug the extruder fan too! Print seems to be proceeding normally, and cheap IR thermometer reads about 54 degrees C at the top of the junction where the filament emerges from the extruder. Extruder stepper motor temp with no fan actually reads lower than the temp of the X axis motor, so I'm guessing the new metal mount is an effective heat sink.

Oddly, my cheap Radio Shack multimeter reads "0.L" when I try to read the voltage at the connectors for the extruder and Rambo fans...but for now it appears that running without either is a viable solution for noise abatement.

by sthone
Not sure how that's possible.... the Rambo Fan and the Extruder Fan are wired in series and share the same plug in the box. (unless they changed something or you are confusing it with the bed fan.)

by dramsey
Nope. I may be a newbie at this, but even I can tell the difference between the extruder fan--- small, mounted vertically, blows straight back-- and the bed fan-- larger, mounted at an angle, blows down on the bed.

On my system either fan-- Rambo or extruder-- will run when plugged in, without the other being plugged in.

So I guess they changed something in the most recent machines.

by sthone
Yeah my best guess is maybe they switched to 24v fans for both and must just be wire parallel now.

by jsc
Yay, they simplified the fan situation.

I'll double check when I get back into town, but that does explain why:

Oh well. I can just leave the Rambo fan unplugged, and that solves my proximate noise complaint.
All times are UTC+01:00
Page 4 of 8
Powered by phpBB® Forum Software © phpBB Limited
https://www.phpbb.com/