The place to discuss your hardware and software/firmware modifications...
Post Reply
19 posts

I ordered the titan quite about a month ago but just havent had the time to get it installed. I havent been overly happy with the v4's on my new dual setup so I decided to just install the titan and a single v6 in place of the duals and reinstall the duals when the need presents itself.

For anyone interested in doing this upgrade I'll lay out how I went about it and my thoughts on the unit:

As for the titan itself, when I first got it I loosely assembled it with a spare v6 heatsink I had and while I hadn't expected miracles from a plastic component, I was definitely surprised by how well everything fit and how tight the tolerances were. If you swap hot ends with any frequency then this will be great for you. I noticed that with my printed filament drives, over time they would get loose from the constant in and out and the wear and tear of printing. The titan lets the v6 slide in without any resistance but when the cover is on its rock solid. Assembly was a breeze, and my only issue, although it is to be expected considering it has to be able to fit many different printers, is that it requires a shim to be printed for it to be usable (I got around this somewhat by using the makergear motor mount, more on this in a sec).

Installation.. I wanted to avoid making a bunch of printed parts and having to do the trial and error method of development on them so I figured if I took the makergear metal motor mount and flipped it around, it would space the motor off enough to make up for not having the planetary drive that the makergear comes with. It worked! It's a bit tight but everything clears. I then made a piece that makes up the space where the motor mount doesn't cover, and evenly distributes the clamp force between the titan and the motor face, not only that but it also has the arm for holding the fan duct that Neo Usagi on thingiverse designed, which I didn't want to give up. When printed at 100 microns and 100% infill, its very sturdy (I'll put the link at the bottom with the photos). I was able to flip the new cable management box to the other side and still use it. It turned out to be a very slick setup IMHO

I had to model a base plate to mount the motor mount to but if you have an old v3b setup that wont be needed, just for dual v4 owners and MAYBE single v4 owners too. not sure.


Lastly the re-calibration.... This was the difficult and time consuming part. Keep in mind I had to reflash from dual firmware to single and dick around with that, and I of course had to do the PID autotune procedure AND adjust the default steps/unit in the firmware for the new stepper and drive setup (not that it matters much but I used the motor that came with the titan), E3D recommends 426 steps/mm but when I tried that it was way overextruding, I've tried 420, 370 and I'm about to try 390, you'll have to do your own trial and error or you can just adjust the extrusion multiplier in S3D, whichever floats your boat. I also had to depin the plug on the board end of the extruder motor cable and swap the 2 inside pins since the coils are wired differently on the e3d motor for whatever reason, this wont be an issue for anyone that wants to take the snout off their makergear drive setup and use that motor instead (which I thought of doing, but removing the pinion and dicking around with that totally went against my lack of patience).

***EDIT/UPDATE*** it turns out that the ideal steps/unit value is 390 in my particular application. This keeps the extrusion multiplier around .89-.90
*** ANOTHER EDIT/UPDATE*** getting the steps per mm dialed in is VERY tedious and fickle. I am currently using 435, but even then I get thin extrusions sometimes. I did the "mark the filament" and extrude 100mm method to get it dialed in but even then it wasnt consistent. The same steps/mm value would overshoot and undershoot the mark depending on how it felt at that moment. I'm debating removing it and going to the same setup my other M2 has, but I'm really reluctant to give up...

Final thoughts...
-the filament path is excellent and will be a dream for printing flexibles
-loading and unloading filament is very easy since you can pull back on the tension idler and do it manually with the hot end warmed up. No S3D commands needed.
-nice clean setup that utilizes some of the original parts from makergear that I really liked (metal motor mount, cable management box)

All in all, I'm pleased with the new setup and I would probably recommend it to a friend, hopefully someone finds this writeup useful! 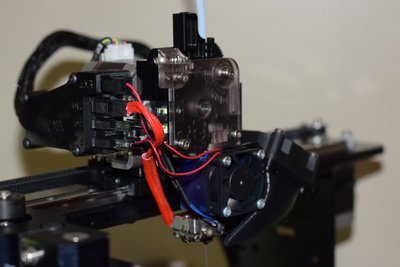 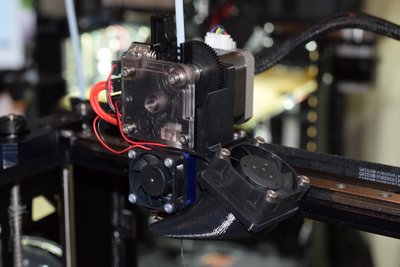 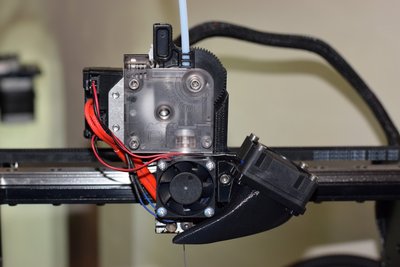 Nice one. I still have mine sitting in the box , this will help.
Top

I just received a Titan, was having extrusion issues and decided it was a good excuse to upgrade since the extruder mount was getting a little wobbly anyway.

Like you I found the recommended settings to over extrude somewhat. I found 408 steps per mm to give me a pretty perfect 100mm extrusion when asked.... I haven't noticed any of the inconsistency you mention. I tried several times and it always seemed to hit the mark (famous last words?). I also have dreamily consistent extrusion. Perhaps double check all your connections?

Good shout on the motor having swapped middle contacts vs stock makergear. I like to think I would have checked but perhaps not

I am currently having issues with it starting to print absolutely fine, then at some point for no apparent reason the filament will strip and stop extruding. This is the same issue I was having with the old extruder, so I wonder if it is the hot end that has partially clogged up. Every time I restart the print it works fine for a good 30-50 minutes though before screwing up. I've only tried my CF XT20 so far so tomorrow perhaps it'll be time to try a different material.
Top

Just to update, I have fitted a new nozzle and seems all to be fine now - must have been a partial block.

Did you wind up sticking with the titan? Would the new Titan Aero work?
Top

I have titan's on both of my M2's and I've been very pleased with them. In my opinion, I wouldn't go with the Aero for the M2, for a couple reasons, mainly the reduced flexibility that I perceive in having it combined into one unit, its kind of ugly in my opinion, and the reduced z-height would make it a bit of a challenge to mount. I don't think my method could be used with the Aero for this reason.

If I were to do it all over again, now that they have released the "mirrored" version of the titan, I would use those instead. With my setup, you lose a bit of X axis due to the hot end being oriented on the right side of the input shaft. If you were to use the mirrored version, this wouldn't be an issue, however you couldnt use my fan duct mount and there would be some adjustments needed to work with the mirrored version over the original.

I'm slowly working on my own design for a compact extruder, so I've lost interest in going further down the titan path. That said, its a wonderful upgrade and a great companion to the e3d hot ends that I personally believe are the best option out there at this time.

If you are considering getting the titan, definitely go for it.
Top

By any chance does this upgrade allow you to print with high temp materials (Paek, ULTEM, Firewire, etc.)?
Top

The titan doesnt affect the temp range of materials that you can print with. If you want to print with high temp materials, I suggest looking into the PT100 upgrade from e3d. I did that, and I now print in ultem.
Top

So if I were to start from scratch on my old M2 (which I have modded for other purposes) or run and get a new M3 and start an upgrade from square 1, what upgrades would I need to do this? I have read a full ed3 v6 hotend and a volcano nozzle, and a thermocouple. would that PT100 replace that thermocouple or am I looking at this all wrong?
Top

printingPEIces wrote:So if I were to start from scratch on my old M2 (which I have modded for other purposes) or run and get a new M3 and start an upgrade from square 1, what upgrades would I need to do this? I have read a full ed3 v6 hotend and a volcano nozzle, and a thermocouple. would that PT100 replace that thermocouple or am I looking at this all wrong?

If you want, I have the (made one-off by MakerGear) pieces to retrofit a Volcano onto an M2 (Volcano, 0.8mm nozzle, mounting plate, heater, thermistor). It's a drop-in replacement. Cover the cost of the Volcano gear and shipping and it's yours.
Custom 3D printing for you or your business -- quote [at] pingring.org
Top
Post Reply
19 posts