The place to discuss your hardware and software/firmware modifications...
Post Reply
30 posts

Here is the 50mm fan with no guard. Noise is more or less the same without the guard as it is with the new guard. 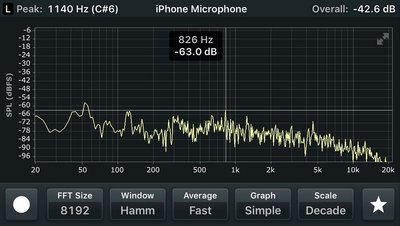 What app are you using for the measurements?
Top

It's a app called "FFT Plot" from the Apple's App Store. Uses the iPhone's built-in microphone or you can plug in an external microphone if you desire. I am running it on an iPhone 5S. I have used this app on an iPad with a high fidelity microphone in the lab at the office and compared results to those taken with a high-end spectrum analyzer and the correlation is very good. Of coarse you must pay attention to distance from the sound source, objects around the sound source, orientation of the phone, etc. when making comparative measurements. These can be reasonably managed but not perfectly. If I repeated the measurements 10 times there would be some degree of variation in the values measured but I think the general relationships would remain consistent.
Top

Did a V4 version of this ever come to life?
Top

did you ever make the V4 hotted fan duct?
thanks
- peter,

I'm not ready to install a duct on my bed fan quite yet, but I've heard that the factory guard cuts down on air flow significantly, and that you can improve bridging in PETG by removing it completely:

As a start, I think I'd like to keep some sort of guard on, but one that wouldn't mess up the air flow too much. Quaver's design looks awesome. I'd like to second a request for an SLT or similar CAD file to make one for my machine.
Top

please do share your STL if this new duct was successful for the V4!
- peter,

Quaver seems to have gone silent since around June, and he hasn't visited this thread in almost a year. I really need to add a fan duct to my M2E. I have a lot of PLA prints where everything is fine, but the front edge warps because the stock fan configuration is overcooling the front of the print compared to the back portion.

Barring Quaver's reappearance, does anyone have a favorite M2E (V4 hot end) bed fan duct they can point me to? I've seen several designs on Thingiverse, but the comments from the designers & users imply that most of them create significant back pressure on the fan. That may be unavoidable, but Quaver at least did the flow analysis to minimize that.

I had the exact same warping problem (you have no idea how many bad/almost unacceptable prints I went through) you've experienced. I have installed this duct and have not worried about backpressure issues, AND solved my issues with over-cooling on the front. The below duct reduces maintenance access to the extruder nozzle. As that my routine involves doing the pre-extrusion and wiping the excess off before starting up the print, with its own pre-extrusion segment. The lack of access makes the pre-print extrusion process awkward. Not impossible, just more annoying than a "naked" nozzle.

I have also used this second duct with similar positive results, and the nozzle is way more accessible, but I worried about the duct getting hung up on the print, even though that should be impossible.

In both cases, the fan wiring should really be extended. I managed to install the duct, and force the fan, restricted by the length of the wiring onto the duct, but I fear long term usage will cause a fan fault. As that I've endured just every conceivable fault with my M3, I'm concerned about yet more down time.
Top

ajmadison wrote:I had the exact same warping problem (you have no idea how many bad/almost unacceptable prints I went through) you've experienced. I have installed this duct and have not worried about backpressure issues, AND solved my issues with over-cooling on the front. The below duct reduces maintenance access to the extruder nozzle. As that my routine involves doing the pre-extrusion and wiping the excess off before starting up the print, with its own pre-extrusion segment. The lack of access makes the pre-print extrusion process awkward. Not impossible, just more annoying than a "naked" nozzle.

I've looked into the fan/blower issue. I started by trying to track down the specs on the fan MakerGear supplies, which is a Sunon KDE2405PFV1 fan. The fan says 2.3W, but the only specs I could find are for a 1.4W power version:

This is an old fan, and is discontinued. I'm guessing that MakerGear got a good deal on a big supply, and that the 1.4W version is a newer one with a more efficient motor. Hopefully it has the same general airflow & noise specs.

Rather than trying to save a few bucks by getting an unknown fan off of eBay, I went to Digikey to look for a similar sized fan or blower that had similar specs but could handle more back pressure. I came up with:

The critical specs are tabulated below. I had to assume that the original fan specs are the same as the lower power version:

The battle is largely between the middle pair. The quieter blower can handle only slightly better back pressure than the original fan, at half the CFM.

The 15mm thick fan draws less power than the original, and produces 30% boost in CFM and at a 66% increase in back pressure. The only downside is the extra weight, but that will probably get swapped by the shroud. The existing fan is supported by only one screw, so going to two should fix that.

The blower is 10 dB louder than the original fan, and produces less than 1/3rd the CFM at only a modest increase in back pressure. It also draws almost twice the DC power.

The trick is to compare the CFM vs back pressure curves. The one on the left is the 15 mm thick fan, and the one on the right is the blower (Digikey sells the "E" version): 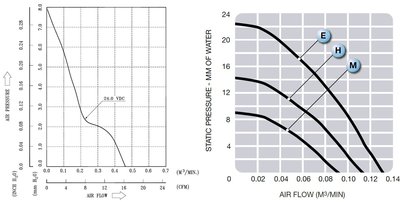 I've ordered one of the fans, and the appropriate connector & pins to plug it into the existing harness block. With the possible exception of the added weight it should just bolt right on in place of the old one.

As for shrouds, I've looked at both of ajmadison's designs, and will probably use one as a starting point. The ring is nice, but I also like to be able to clean my nozzle easily. The single nozzle still has a bit of a problem that it will tend to cool the front of things more than the rear, but the affected area is much smaller. There are a couple of designs where the nozzles are split, and feed in from each side. That gives more uniform cooling, and still has reasonable access to the nozzle. I thought I found one that looked like a good starting point, but I can't locate it now. Here's a design using that concept with a fan, but for a different printer:

For those who want to dig into this swamp further, I also found a couple detailed studies of the effectiveness of different fan, blower & duct combinations: