Wanted more light on the part so I installed a couple of LED on the back of the bed fan. I also removed the finger guards from both fans to reduce the noise and move more air.
Parts List is:
2 NTE30045 White LEDs (local Micro center)
1 560 ohm resistor
Arduino male and female headers 2 pins worth of each
hookup wire, shrink tubing, wire ties
Attached SLTs of LED brackets, LED covers, 3mm Spacer

Both Fans are 24v on my M2 so resistor is for 24v, if you have 12v that would need to change, check online-calc for proper resistance. http://ledz.com/?p=zz.led.resistor.calculator
More info below, above each photo
Finished product 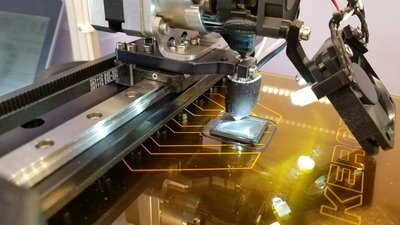 5mm LED back cover.stl
LED back Cover (keep the light out of you eyes and helps reflect it out the front
(112.78 KiB) Downloaded 122 times

The rest of the pictures are outside the forum, if you are looking at this sometime in the future and they are not working please PM me so I can fix my DNS entry..
Brackets and LED covers

Brackets on Fan from Front and Back

LEDs are wired in series with the resistor is first in line before the LED. Feed will be coming from the extruder fan leads. The white wire connects the negative lead of the first LED to the positive of the second.

To tap into the extruder fan lead I wanted a removable connector should I need to replace that fan so I made one with the Arduino headers. Liquid electrical tape was used to insulate and give strength to the connector.

Inputs for the LED getting the Male end of the connector.

Installed and plugged in

Closeup of the home made header connector

Lights on test not printing