another thought in addition to what insta said. do you have the tension bolt tightened down at all? its a soft plastic. if there is any tension on it the bearing will easily squish the filament out of round and jam in the filament path.
Top

it looks like my assumption that the tension on the extruder had to be higher to grip the flexible stuff was a big part of the problem here, I backed it off entirely and it feeds well at SLOW speeds. I had already had it at 30mm/sec but dropped it to 25 to see if that would improve it, I settled back on 30.

Another thing that caused issues was that I had decided to go back to heated glass instead of unheated blue tape, but apparently my bed just cant get clean enough because some stuff sticks, some stuff smears and balls up. I use sealed isopropyl alcohol pads to wipe it down, BUT I dont use an adhesive of any kind, guess its time to get a glue stick or something. Can anyone recommend an adhesive that will bond well at temp, but release once its cooled?

the tension bolt is a commonly overlooked source of jamming. especially with the softer materials. as for adhesive, it seems everyone tries all kinds of stuff but most end up falling back on ether glue stick or hairspray. i prefer hairspray myself.
Top

Am I correct in assuming that if I use a good adhesive that having a perfectly clean bed isnt as critical? will hairspray release once the bed is cold or do you have to fight the parts off?
Top

It will pop right off as it cools.
I am not sure how tolerant it is to being dirty. I try hard not to touch the bed more than needed as an old habit from running just a clean glass bed.
After each print I give it a quick misting that evens it all out again. After a little while It builds up and I wash it with hot water and soap and then after it is dry give it a nice coat, not so much as it would drip but nice and solid for the first time.

eSun flexible vs. Ninjaflex and Semiflex

I have been doing some testing with Esun Flexible filament alongside some Ninjaflex and Semiflex. They are the same in a broad sense, but do have some differences that come into play.

First I would like to thank William at http://www.intservo.com for adding a sample of the flexible filament to my order of PETG to try out. I had already ordered the other flex filaments and I was interested in trying them all out. This was my first time using flexible filament. I have recently gotten a V4 nozzle and decided the time had come to try out some new materials. I have read good things about the Esun PETG and so figured it would be worth a try to compare their filament in a very informal fashion against the other filaments.

I printed a couple of items in each filament at a couple of different settings to get a basic idea of how they compared. I won't go very detailed into settings, just some general thoughts.

The first to arrive in my orders was the Semiflex (black) and Ninjaflex (white) I had a project already in mind that required black Semiflex (a black monitor hood for FPV) and started with it. Next, I printed some white Ninjaflex objects for a wearable project for my daughter. The next day my Esun filament arrived and I printed a few samples with it as well.

Even thought the Esun arrived last (just due to my ordering times) it worked out better that way. Since I had gained a bit of experience with the other flexible filaments, I was able to jump right in with some basic settings for the Esun. The first settings I tried was based on a very flexy filament, such as the Ninjaflex. This was too hot and overextruded. Next I tried settings geared towards a stiffer filament such as the Semiflex. This was closer, but still not quite right. For fun I even tried a PLA setting....I quit after two layers on that one. I settled on 1500 mm/min speed, slight retraction and 240ºC, this is faster than Ninjaflex, but not quite as fast as the Semiflex, which is still pretty slow, a necessity of this type of filament.

I printed a couple of similar blocks to get an idea of how the products felt and printed. I did not do rigorous testing of millions of settings, I got close to what would make a good print and went from there. Once basic settings were established, all three filaments did an impressive job. I was expecting this to be a lot harder to get printing with, but thanks to previous efforts by the MG community, I was able to get a running start on the settings.

Once in hand, you can start to feel how the filaments are different. The NF(Ninjaflex) is the softest the EF (Esun Flexible) next, then the SF(Semiflex). You will be able to vastly change how these items rank in stiffness by varying your print settings. I am discussing just raw filament and comparable items printed at the same setting. Also in feel, the NF and SF are more rubbery and the EF more plastic-like.

In looks, the black SF is black, but the NF and EF are both "white". If I wanted a translucent, arctic white, the NF would be the white I would like. If I wanted a more transparent white, then EF. The EF has less pigment, but transmits light a bit better for LED projects. I hope esun develops more colors to choose from.

In tear strength, the SF is the toughest, followed by the NF, then the EF. This is the only area the EF lacked in. These filaments are all insanely tough, you can stretch the EF and it will give greatly, but break before the NF and EF. As I commented before, there is a plastic vs. rubber feeling in comparing these filaments. It becomes apparent when you try to destructively rip prints to pieces in your bare hands. I had to print a tiny strip to even be able to tear any of these. They all produce near indestructible objects when printed, but the edge goes to the other filaments. The difference here may not even apply for most applications of this filament, but is something to keep in mind if ultimate tear strength is mission critical.

Detail-wise, they all took detail equally well, as long as the prints were designed for a filament printer. Overhangs are fine, but supports are going to be a issue with the flexible filaments, as they are very tough. So try not to need them.

All through the prints, one thing seemed to make itself apparent during the testing. The Esun is as good as some of the best flexible filaments around, it was a good middle ground between the other filaments. It did take the prize for one category and that is cost! It runs about 20% less than the other filaments. Even though it is manufacutured abroad, I can feel good about purchasing locally, as Intservo is in my state, only 1.5 hours from me and I support local owners when I can.

In the end, there was no winner, as you will require different things from your project. I do feel like the Esun did a great job and would recommend it to someone just getting started with flexible filaments. It is a bit easier to deal with than the Ninjaflex, which can get tricky to feed. Semiflex can be be too dense to flex much at denser settings. I found the Esun to hit a happy middle ground all around, trading a bit of tear strength in exchange for the lower cost. I am very glad to have added flexible filaments and look forward to finding some new applications for them in the future. 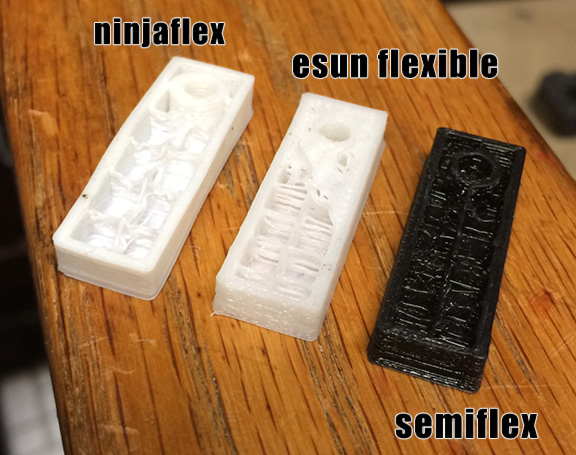 Don't mind the fill. These are just test scraps. This is just to show color difference.
esunflex.jpg (108.14 KiB) Viewed 8069 times

interesting and good info will. i guess i want to know which esun flexible are you using? if you know this? there is the esun flexable which is on intservo's website and has been available for a long time. that material is less rubbery and more like a flexible plastic. its probably a flex pla like many flexible filaments out there. esun has a couple in development which i have gotten samples of to test. one is a clear type flex and it is an identical copy of ninjaflex. prints exactly the same and the same parts side by side printed in ninjaflex and the clear esun have identical properties. in fact if you didnt tell me i could never tell the difference. now i have another esun flexible here that is a rubber and similar but its white. not quite as white as the ninjaflex but in the neighborhood. this is close to ninjaflex but when stretched it doesnt rebound quite as well as ninjaflex. its a little different. i need to do some printing with it to figure out the differences. something is different i just cant put my finger on it. again both the clear and white are test samples and not released or in production yet so i was wondering if you got the original flex or a sample of this new stuff?
Top

My sample arrived from China to Intservo last week and shipped to me the same day. I know this because he held my order so I could try the latest flex arrival. I have not tried any other Esun flex. I assume that is what I have. I posted a link to William at Intservo to my post, so maybe he can add some more info.

As you can see from the above pic this batch is slightly more transparent white than bright opaque white, it is not clear. If you just saw the first layer printed, you would think it was clear, but a couple layers later the white starts becoming more apparent. This filament is like the frozen white in an ice cube, not pure snow white.

I also commented about it feeling more like plastic than rubber. It would be more accurate to say it felt more like PLA. There is a difference from the rubberiness of the Ninjaflex that would lead me to think it is more of a flexible PLA. When torn to the failure point it stretches nearly as much as the others, but gives way suddenly, similar to a PLA break.

That second batch you describe sounds similar to what I received. Man, now I want to know about your other batch.

A thread with some stuff in it I update every once in a while. viewtopic.php?f=8&t=9
See some of my stuff http://www.thingiverse.com/willnewton/about
Top
Post Reply
28 posts