PLA Plus Other Than eSun?

PLA Plus Other Than eSun?

by Gwhite
I've been really happy with the results I've been getting with eSun's PLA Plus/Pro filament. However, I need to do something in a dark red. eSun's colors are limited, and all the reviews I've seen say their red tends to be very orange-ish.

Sunlu also has a PLA+ offering, but apparently their red is more of a pink.

The only thing I've found that looks vaguely right is from Monoprice: https://www.amazon.com/gp/product/B01MD ... 113M5738UM

Has anyone had experience with Monoprice's PLA+ filament, or are there other vendors I should check out?

by jimc
just look for any pla. pla+ from esun isnt the same as pla+ from another comapny. its just a name esun gave their premium pla line. its not a specific type of pla.

by Gwhite
eSun's PLA + is NOT just another PLA. It is much stronger than regular PLA. Both Sunlu and Monoprice make the same claim about their PLA Plus material. Monoprice says it's as strong as ABS. I haven't done any detailed testing (although others have), but several of my designs require flexible snap fits, and the eSun material definitely works better than regular PLA.

by jimc
i know and i have used it. i have used esun almost exclusively for 3 years. its not a specialty material. its pla just a slightly better grade/formulation. its not as hard and brittle. keep in mind when a company claims their material is stronger, that is a huge generalization. every material is stronger in one way and weaker in another. the pla+ has better impact resistance because its less brittle so its stronger in that way but its less rigid so weaker in that way. in any case my point is that pla+ isnt a type of pla that you can expect to be the same if you bought monoprice or another brand. esun also private lables to a ton of other manufacturers so keep that in mind as well. if you find something from another brand that says pla+ it may very well be esun material and can look a different color just because of the pic is different. esun's red pla and abs is more brick red so yes its very orange and dull color. i was never a fan.

by Gwhite
For ~ $10, I may just go ahead & order a half kg of the Monoprice stuff. The color certainly looks better than the other options, but web images are often misleading.

by Gwhite
Well, the Monoprice red PLA+ showed up today. The color is definitely more bright & orange-ish than the photos suggest. I suspect it is just re-branded eSun PLA Pro filament. The color matches some of the complaints raised in Amazon eSun reviews. The filament end is also taped down in exactly the same manner as eSun's PLA Pro/Plus, with the same sort of fiberglass reinforced tape.

It looks like if I want the right color, I will have to use a standard PLA. The model I need to print first has a flexible snap feature, and I suspect the weaker PLA will require a redesign of that feature.

by Phil
I have had good luck with these guys: https://www.makergeeks.com/collections/ ... series-pla
Their price cannot be beat.

by Gwhite
I ended up ordering plain PLA in "iron red" from Paramount 3D. They actually have the decency to give the Pantone color code for their filament, and the "iron red" is very close to what i'm trying to duplicate. I couldn't find too many reviews, but the ones I did were all positive.

by willnewton
Stick up a screenshot of the “flexible snap feature” and you may get some feedback on improving the design for PLA.

PLA snap fits are totally doable. Most of the time you can get them to work just fine by designing a less aggressive hook or working the hook lightly with a file to smooth the action and prevent too much bending at the snap area.

by Gwhite
Tuning the snap feature is basically a matter of adjusting the length of a slot. Here are the two pieces involved: 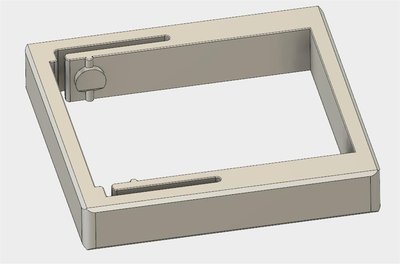 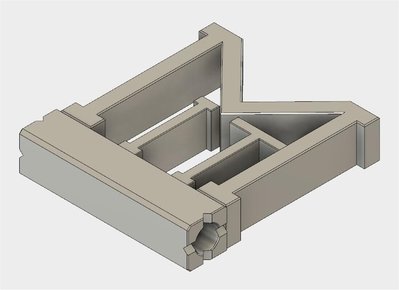 There is an outer frame with two snap arms. Each arm has a stud that fits into holes on either side of the middle piece. There are detent features which should lock the middle part either laying down in the frame, or standing up.

I want the spring arms in the frame stiff enough to hold the middle piece securely, without fatiguing & breaking over time. PLA+ is more flexible than straight PLA, but it is also stronger & less brittle. I've got it dialed in pretty well for PLA+, but I'll have to start all over again for straight PLA. I can easily get it so it snaps into place OK, but how long it will hold up in use is another question... I'd prefer not to have to replace these very often.
All times are UTC+01:00
Page 1 of 2
Powered by phpBB® Forum Software © phpBB Limited
https://www.phpbb.com/