thoughts on new M3 I dual

The place to discuss the M3-ID
Post Reply
13 posts

Yes they both do the wipe move. Although I have installed a PEI sheet and nothing gets wiped off anymore. Probably due to my nozzle height setting. Thinking of building a actual wipe brush setup. But it has not been a problem so far. I got my ID on the 23rd and it has been running non stop ever since. It is 12:57am on 12/31/17. I have completed a 18, 29, and am working on another 24 hour print. Well S3D said it was only 14 and octo gave me a 3 day estimate. 3 hours into a 45.4MB print and octo says I have 20hrs left. I have ran MG PLA, IC3D pla, and am currently using 3D Solutech silver PLA. I am printing ericthepoolboys LS3 engine. The intake was the 29hr print, I printed 7 pistons at .1 layer and that was the 18hr print. I am currently printing both heads in duplicate mode, S3D said 9 hrs for one and 17 for both with a single extruder, so I figured I'd run the duplication mode and do both in the 9 hr time. Well looks like it's gonna take a little longer but still half the time as using one nozzle.

My first time using S3D and only my second print in duplication mode. I placed my models as far to the right as I could on the bed in fear that the heads would collide. There is no check that I saw in S3D that makes sure your heads will not run into each other in DUP mode. I found that out the hard way. I just made sure that I thought of the model as only ONE model and made all of my settings from there. Since E0 cannot completely clear the bed as E1 can I programed everything from it. Also make sure you do not have two tool paths in S3D preview. It will let you run a brim with both tool heads which can cause a crash of the two if you are not careful. You can imagine how I found that out:}

After learning from my mistakes I am 1millon times happy with this printer.
The only settings I have changed from the MG S3D settings are my retract distance and speed, temp settings for different materials, and my start layer %. I have left the speeds at default and it prints perfect! Slow, but perfect. I have a rostock max V1 upgraded to a V3 so I am used too a lot faster speeds, and I have NEVER been able to get PLA to work on that machine. But all the parts that I print and sell are ABS so I never really cared. I purchased the M3 ID for the duplication mode, to make twice the parts in half the time. I have not printed anything in ABS yet but I am sure I can get it to work. I love this machine! I built a half a$#^d enclosure out of cardboard and bubble wrap and on the non printing head I can get 40C with the bed set at 60C in a room that is maybe 68F. Not bad.

I am looking forward to the release of the M3 enclosure at the end of FEB. Hopefully if will not be a cheap plastic cover like some of the other printer manufactures. I'm sure MG will do it right.
Top

I have it now for a few weeks and am really happy with the Kruger. The only weakness I can spot is the fan located at the below the build plate, I had some poly support falling down. If a little piece gets in the fan it would ruin it I think. 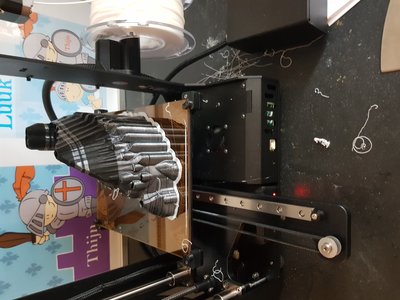 I think I'm going to put some kind of extra barrier above it.
Top

Sticking a screwdriver in the fan is a bad idea (and it happens in moments of inattention in spite of one's best efforts), but I would not expect a piece of wayward plastic to do more than just stop it. At any rate, I have printed for years and never had an issue with the electronics enclosure fan, nor seen any forum posts of anyone who did (other than the issue of the 12V fans wired in series, but that's an M2 thing and I don't know if it applies to the M3).
Top
Post Reply
13 posts