The place to discuss the M3-ID
Post Reply
17 posts

I just finished an 8-hour print of a part on my relatively new M3-ID using a brand-new shrink-wrapped roll of high quality black PETG, with blue PLA for the minimal support needed for the part. The result has two extremely bad X-axis X-axis shifts- one at either end of the part. In addition, there is a lot of stringing and surface roughness all over the part. I confirmed that the glass plate is secure, and that both X-axis belts are tight. I have attached some photos. Any ideas why this is occurring?

Have you printed this before successfully? I had x axis shifting recently on my M2 while printing PETG. It was due to slightly over extruding and printing without a fan. The print was curling at the edges of the print and blobbing. This was catching the extruder as it went by causing skipping. I backed down my extrusion multiplier and turn on my cooling fan. You may want to post your print settings including what filament type (PETG - just saw that) you are printing and printing speed.

Thanks for the input. Yes, I have had a number of successful prints with the M3-ID, with a range of different materials. The over-extruding and under-cooling may have been the issue. I had extrusion set for 1.15, and no part cooling at all. I'm trying it again with extrusion reduced to 1, and part cooling enabled after layer 5.

I'll report back with results.

I tried to print the same part as before, and got the same (badly shifted in X) result. This was with PETG, 60% cooling fan at layer 5 & up, extrusion percentage at 100% (it was at 115% for the first try). I'm using the latest version of S3D for slicing.

This part has a curved bottom supported by PLA support material, and it appears that one side of the curved bottom was flexing upward a bit on each layer pass. As the main extruder head moved off the table to make room for the support extruder, I could hear a loud 'stutter' for a second or so as it passed the end of the part (the place where the material was slightly raised). I now suspect that the X-axis stepper motor is torquing out and stalling for several steps as this happens, making the step count off. The X-axis error accumulates for each layer where the primary extruder has to move off the table, and by the time the support layers are done, the accumulated error produces the X-axis shift seen in the previous photos. This would also explain the 'protruding lip' on the side with the rounded end (opposite the vertical connector piece). As the X-axis error accumulates, the print slowly moves to the right, layer by layer.

Here's a photo of the second try, cancelled shortly after the support layers were finished when I realized the same X-shift was present. 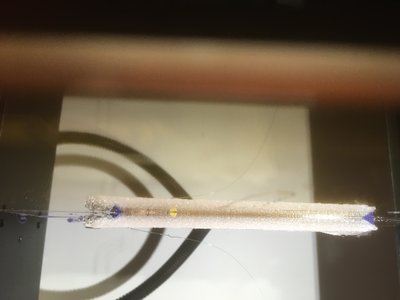 Same part as before, but cancelled after support layers

It can be hard to tell which way is 'up' in this photo due to the mirroring effect of the kapton tape layer, so make sure you are looking at the photo with the big overhang on the right side, with the near edge of the table (brown/orange bar) at the bottom.

Assuming my theory about this is correct, I'm a bit amazed that S3D doesn't raise the primary head (i.e. lower the table) before moving it off the table. Is there something I can do in S3D to make this happen?

Try setting your extrusion multiplier at .93 and use only one extruder, petg supports at 40% 1mm resolution, speed of 35mmS, temp 230C and 70C for the bed no fan, layer height .25, retraction 1.10mm, 30mms, no wipe no costing only retract over open spaces and an extrusion width of .40 assuming a .35 mm nozzle and see what happens. Those would be the setting I would use with PETG and the M2, off the top of my head. Sorry to the out of order.. was not looking at S3D Sorry on the support, 1 separation layer at top, .2 mm from part
Top

I ran another experiment where I turned the model 90 degrees in S3D to (I thought) avoid the stepper motor stall problem. Unfortunately all that happened is to change the X-shift to a Y-shift!

I guess the good news is that I'm now pretty sure it is caused by the nozzle dragging on the slightly upturned ends of the previous few layers. I was actually able to watch it do this a few times, and I could hear the 'stutter' as the stepper motor slipped steps (or at least I think that's what is happening).

Meanwhile, my Prusa MK3S is happily printing all of these parts with no problem, with the same filament

airscapes wrote: ↑
Sat Jun 20, 2020 8:15 pm
Try setting your extrusion multiplier at .93 and use only one extruder, petg supports at 40% 1mm resolution, speed of 35mmS, temp 230C and 70C for the bed no fan, layer height .25, retraction 1.10mm, 30mms, no wipe no costing only retract over open spaces and an extrusion width of .40 assuming a .35 mm nozzle and see what happens. Those would be the setting I would use with PETG and the M2, off the top of my head. Sorry to the out of order.. was not looking at S3D Sorry on the support, 1 separation layer at top, .2 mm from part

Going through your suggested settings; I have attached the resulting S3D profile if you care to have a look. I'm setting this up for print, but it will be a while before I can report anything

Keep in mind I am using and M2 with S3D 4.01 not the buggy current version.

S3D has different support resolution.. 1mm 2mm 3mm etc 1mm is the smallest 40% is the density of the supports.
PETG should not be printed with cooling, it does not need cooling.
I keep retraction close to the print speed, I have found no advantage in it being faster but do as you feel comfortable, it really is not all that important. Not sure how you set up the Z offset in the M3 but that should be checked, Print the attached model and measure it with a caliper, should be 3mm tall and assume .4 mm extrusion width, .82 wall thickness if extrusion multiplier is correctly set.