I had this idea that a 3D pen could be used as a rework/embellishment tool for 3D prints, but nobody seems to have tried this before.

I bought the pen from Makergeeks which is unusual in that it takes regular 1.75mm filament in both ABS and PLA. There's a little fudging in this because it doesn't have any temperature control, it comes from the manufacturer with ABS and Makergeeks throws in some PLA.

Tonight as a first test I printed a small piece out of white ABS which is 10mm high and 2mm thick and has the word "hello" as text that's 0.5mm recessed. When that was done I used the pen to glob black ABS into the lettering - the idea was to fill the groove, not to be pretty. Then I took the result and sanded it down level. Not perfect, but I'm satisfied with it as a first try! I might make the lettering a little deeper and I'll certainly make the next test bigger so it's easy to hold on to when sanding.

not bad for a first shot. im sure like anything there is a technique that needs to be worked out. i do quite a bit of plastic welding and its the same thing with that. all technique in getting it to bond and fill correctly. keep us posted with this.
Top

Good job. I think the test shows your idea works. I'm surprised the black abs bonded well enough to allow you to sand it down that much without coming loose.
Top

Your results got me thinking.

I took a print I had lying around, a token about the size of a half dollar with an inset letter in it. I took my jar of no-longer-used ABS juice and spooned it into the lettering with a toothpick, let it set, then sanded it down.

The results aren't quite as nice as sprior's; the pigment has faded from the original red, and there are visible voids from bubbles. But, I didn't have to buy anything. 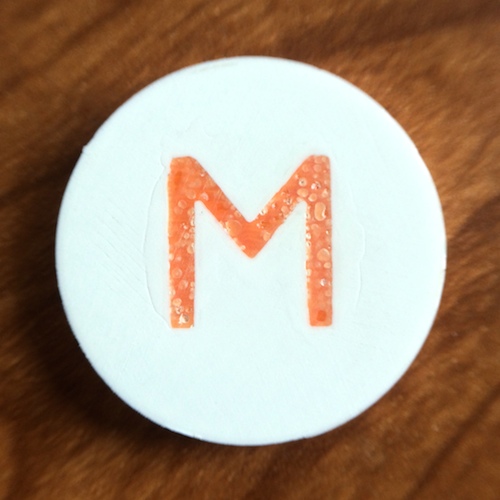