Printing PET+ (banging my head on the table)

Printing PET+ (banging my head on the table)

Today I made a second attempt at printing Madesolid PET+. After reading through every related thread I could find on here, I felt pretty confident.

After 4 hours of starting print after print, I feel like I have tried everything.

On pretty much every print my nozzle is pulling up the first layer at some point.

I think that over extrusion is what's killing my print. The picture below shows what I think is over extrusion for most of the first layer, which was manually over overridden to 50% extrusion.

If anyone has suggestions, I would be happy to hear them! Thanks everyone. 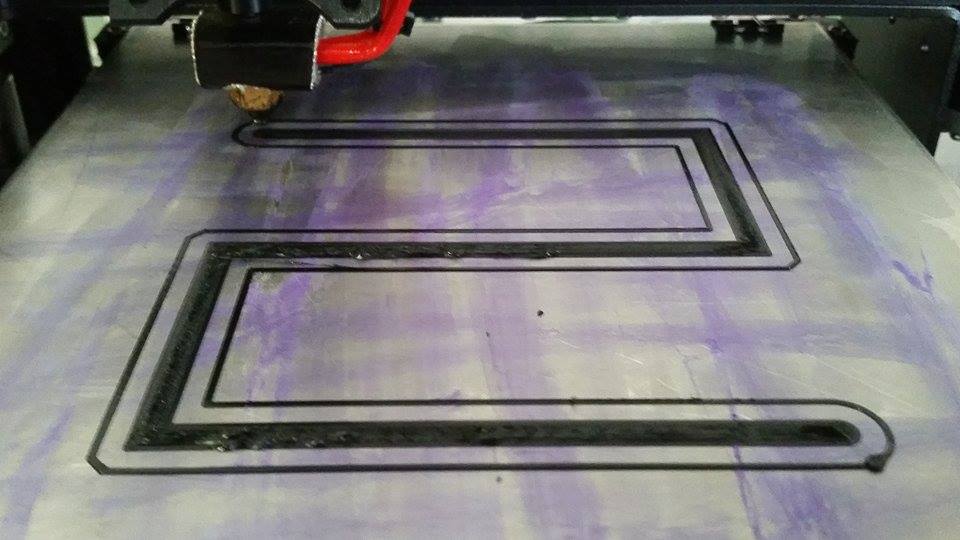 Ok you have your settings all over the place. Go back and set your first layer height back to 100-125%. Multiplier back to around 98-103. First layer width to 100%. Check your filament dia with some calipers and be sure that is set right. If your extruding too much material for first layer then you need to increase your bed gap with the z stop bolt. The amt of material needed for the first layer is set by the gap. If your not getting adhesion then try something other than glue stick. I really dont know if pet+ sticks to glue stick or not. Never tried. I always use hairspray.
Top

What jimc said, for sure. I'd start with the multiplier at about 0.98 and tweak from there. Check the filament diameter a couple places, and at a couple different diameter angles (in case it's oval-ish) and enter the average. (My PET+ has been pretty close to 1.75 mm, but others have reported variances from that.)

Also, if you are using an 0.35 mm nozzle, make sure your extrusion width is not less than 0.40 mm (or set to Auto). I use hairspray with PET+ with no issues -- be sure the bed is clean before you start, then a decent spraying of the bed cold, heat it up and mist it once while hot. The bed doesn't have to be that hot -- 70C should be about right. Finally, if you are using S3D you'll want to use coast, speedy retraction, and little or no Z-lift to avoid pausing and drooling blobs. If you've got the Z-adjust bolt set perfectly for other materials and don't want to change it, you can just add a small positive Z offset in the FFF -- probably just go up 0.02 mm at a time. Within a couple starts you should have it nailed.

Good luck. But once you get that first layer going well, I think you'll like this material. The crystal-clear stuff has been awesome.
Dale
Top

The Extrusion Multiplier is not a free variable: you cannot set it to any random value and expect to get good results.

Measure the filament diameter and tell the slicer about it, then adjust the Extrusion Multiplier so that the extruder actually produces the thread width that it expects. The end result will be that when the slicer says it's producing a 0.40 mm wide thread, that's what you actually measure in the finished object.

I use a thinwall box for initial calibration, because it prints quickly and doesn't leave any place for errors to hide. Printing thinwall boxes, measuring each one, and tweaking the Extrusion Mulitplier until the slicer produces the expected output isn't very exciting, but it also won't take very long.

When that works, use a solid box to calibrate the infill settings. Again, iterate until that works before you try anything else.

You adjust layer heights, speeds, temperatures, and what have you, until the boxes adhere to the platform, build properly, and come out with exactly the dimensions you expect. Then you can try something more complex, with some degree of assurance that you're pretty close to the right settings.

Ed, of course you are correct about extrusion multiplier not being a free variable, and the proper way to set it is to run calibration prints. I was merely trying to offer a "sane" value as a starting point for getting the stuff to stick on the bed. Once that's done, I agree that actual calibration should follow (with accurate measurement of the filament diameter as a necessary input beforehand). Thanks for keeping our advice accurate!
Top

A mistake I've made far too often is trying to change All! The! Things! at once, which inevitably produced terrible results with no clear path out of the swamp. The only technique I've found that works is to start with a few trivially simple test objects, make them print accurately, and get everything calibrated before trying anything complex.

These days, that's all the head banging I can stand... [grin]
--
Ed
http://softsolder.com
Top

Thanks a lot guys! I'm sure you hear this a lot, but I'm really grateful that the community here is so helpful.

The piece shown in the picture is what I was using as a test. It's that shape, 0.100" thick. Maybe it's not a good print for testing/calibration. I'll try the cube as Ed suggested.

I got really good adhesion when I had the bed at 100°, perhaps with hairspray it would work fine at a lower temperature.

I measured the filament in a few places and averaged around Ø0.068" (Ø1.73mm) so that's what I was using. And I started out with the extrusion multiplier at 0.96.

The way that my Z-height is set, I have beautiful first layers at 200% first layer height when I print with ABS, so I'm not sure if I want to adjust my Z-stop yet.

When I did increase my first layer height enough to not smash the filament into a wide path, it was too far from the bed to get good adhesion. That was at 500% first layer height, which seemed like way too far.

I'm unsure and couldn't find the right information on the S3D forum or website to explain what the "first layer width" under the "layer" tab actually does. I understand the first layer width to be mainly affected by how close the nozzle is to the bed and calculated extrusion values based on your input "filament diameter" and "extrusion multiplier".

Do you know how the "first layer width" setting actually works?

I'm thinking that I need to find a balance between my first layer height and a value for the "first layer width" setting...to solve the nozzle running into and lifting up the filament that's already on the bed during the first layer issue.

Then I can move on to calibrating with the thin wall box and the solid box.
Top

Do yourself a favor and start with Jims black PET+profile that he attached to one of his posts located here. viewtopic.php?f=7&t=65&hilit=PET.
It really helped me getting my PET+ to print nicely. I think the only thing I did was up the hotend temp by 5 degrees and turned off the hotend fan completely.

Good luck as I also know how frustrating PET+ can be. I should try some of the esun PETG as I heard it might be a little easier to print with and has similar properties as PET+.

Jerey, when you adjust the first layer height and width in s3d those settings also increase and decrease the flow of the material. If your printing at a height of 200% then s3d is also going to pump out more material to still give you the extrusion width you have set while having a larger bed gap. Those settings are not what you want to be using to adjust your bed gap. You either use you z stop bolt or there are offsets in s3d. These dont affect material flow in any way.
Top

Nelson, that's where I started, then I guess I was adjusting the wrong parameters.

I will give it another shot today, start fresh with those settings then adjust my "g-code offset" until I get it right.

Thanks for clearing that up Jim, that setting always had me a bit confused.

Thanks again guys! I'll let you know how it works out today!
Top
Post Reply
13 posts