A primary reason why I purchased my M2 is because of its relatively large print bed. The initial task for the printer involves printing a relatively large number of pieces (about 500). These pieces fit 4 up on the M2 platen.

Printing 4 up does not increase print speed, but it does improve printer utilization and therefore thruput. For example, if I start a print last thing in the evening, 4 up gives me four pieces overnight, whereas 1 up yields only one.

I've now learned that taking an object that prints well at 1 up to 4 up is not so straightforward. The basic problem is the extruder doesn't behave well through extrusion stop/start. When printing 4 up, there are usually many extrusion stop/starts between pieces. And the duration of these stop/start cycles is relatively long.

The extrusion process is dynamic. When extruding continuously, an equilibrium is achieved in the extruder and this gives a uniform bead.

Retraction is a technique for synchronizing extruder equilibrium with extruder movement. My experiments with retraction so far have not been very successful. It seems like the slicer needs to drive the extruder material and extruder displacement such that a uniform bead is achieved. I use slicr3r. Its retraction algorithm doesn't seem to think this way. Perhaps other slicers are more better?

I've had good success when I am able to coerce my object such that it looks like a single piece (no stop/start) to the extruder. But alas, this is not always possible.

Without having any practical knowledge of FDM printing, I had assumed I could simply squirt molten plastic wherever I wanted it. For the most part these objects I'm printing are well suited to FDM. But for my use model (4 up), the difficulties around extruder stop/start turn out to be a major and unexpected consideration.

I don't have any answers, but perhaps reporting my experience will help others.

I am not sure what you are printing but we run plates of production parts everyday. What you are describing should not be a problem. It sounds like a settings issue.

Absolutely no problem with retraction (or anything else) on the 117 armor buttons atop the links; the whole sheet is nothing but stop-start retraction.

I think if you're having trouble with retraction, it's probably due to mechanical trouble in the extruder or a mis-set slicer parameter. From what I read around here, some exotic filaments don't handle retraction very well, but that doesn't seem to be what you're experiencing.

It'd be helpful to see what you're printing, pictures being worth a thousand words & all that, plus more about the material and slicer parameters.
--
Ed
http://softsolder.com
Top

Yes same here. I print diplicated parts all yhe time. Usually 6 per plate and each oart has 4-8 islands sonlits if hopping around. My parts come out very clean. I usually have 3 printers going at the same time all producing the same parts with no issue. Its all a matter if tuning. Your not going to get away from retraction. Every model will always have hundreds or thousands of retracts. It should be wuite controllable. Damp fialment can cause very inconsistant ozzing making tuning retractions impossible. Just a thought
Top

Ditto what others have said. I print duplicated parts all the time for production environments. I've done up to 32 on one plate but am 100% confident I could do more if I wanted to. It just takes some fine tuning of the settings. If you post the settings you are using I'm sure the experts and experienced amateurs here will be able to help.
Top

Here is the completed object: 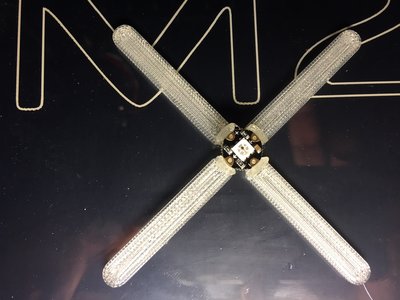 In the center is a small PC board about the diameter of, but thinner than a dime.

This PC board is a snap fit into the plastic. I had to work pretty hard on the design of this snap fit feature to get it to work as intended. It includes features 1 and 2 extrusion threads wide. I've made about 50 of these 1up with reasonably good/consistent results.

Here are two of the objects. 1up on the left. 4 up on the right. Not the greatest picture, best I could do with the iPhone. 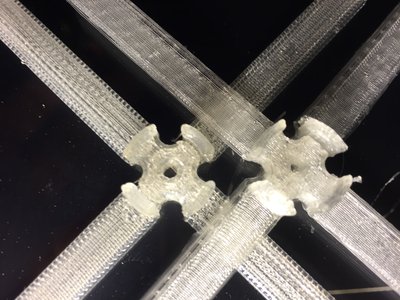 One of the more striking differences between the two is the translucence. The 1up print is much more translucent. I attribute this loss of translucence to extrusion stop, transit, extrusion start. Where the transit is relatively long. I've see the same effect in other prints.

The picture doesn't totally do justice to what I can see up close of course. But if you look closely, you'll notice much more globbing, boogers, etc on the 4up print.

The 4up prints I'm making are probably usable, but the fidelity is not as good as the one up. I'm concerned that due to normal production variances I'll end up with unusable parts when printed 4 up.

Its important to understand that even the 1 up print has quite a bit of extruder stop start. The big difference with the 4 up is the length of time the extruder is stopped.

Here are my slic3r retraction settings: 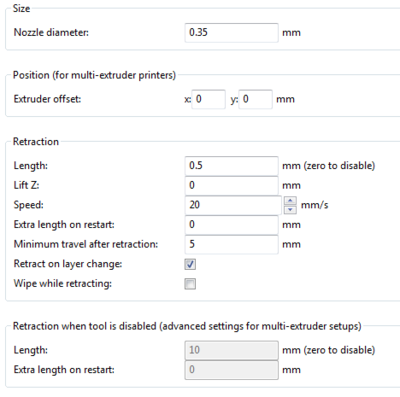 I think these retractions settings are mostly default. For the short extrusion stop times in the 1 up print, they seem to work fine.

And finally, apparently slic3r can print objects sequentially. Since this object is at most 1/2 inch tall, I should not have extruder interference problems. I'm going to try that.

The thread patterns in those two objects look very different: the 1-up blades have many crosswise threads and the 4-up have many longitudinal threads. Something else seems to be going on that has nothing to do with retraction; slicing patterns may be the real gotcha.

I set the non-printing travel speed to 300 mm/s, so the extruder spends very little time moving between separate parts. In any event, it should be finishing the infill (for example) in one blade before traveling to the next. I'd expect the travel time to be about the same and a small part of the total time, regardless of how many blades it's doing.

Looking at the PCB: Neopixels FTW!


I would not expect the precision requirements to be too high

It's actually one of the tighter-toleranced things I've done: the bars are three threads wide, with two thread widths between links. The fact that every single one of the thousand-odd pillars (four in each link) came out spot on and the links didn't fuse together was delightful...
--
Ed
http://softsolder.com
Top

Also your clarity has nothing to do with retraction. It has to do with heat. A 1up part is hotter because there is no cooling time between prints. The layers are melted together a little better.
Top

Neopixels indeed. Ed gets the win!

. Actually, for whatever reasons slic3r stripes the north south legs one way, and the east west legs the other. Don't think that's relevant to my problem.

I have to agree, the improved translucence is probably related to printing on a layer that's still pretty hot versus one that's cooled down.

Turns out slic3r will print objects sequentially. I think this is quickest easiest solution... except for whatever reason slic3r decided to print them in the order where the fan is going to hit printed object 1 and 2 while printing objects 3 and 4

Two possible solutions. Move the fan up 1/2 inch. Or, does anybody know how to convince slic3r to print objects in a particular order? If you're trying to print sequentially with an M2, this is a pretty obvious requirement.

bignordique wrote:how to convince slic3r to print objects in a particular order?

You can't, but you can tell it how much space the extruder's snout occupies; getting enough clearance for the fan probably requires an absurdly large diameter:

Obviously, there's a reward for placing the objects far enough apart to make that clearance work.