The State of the Gear

rpollack wrote:If you recently purchased an M2 an you are interested in the M3, contact us directly.

I bought my Rev E dual unit close to a year ago. I wasn't happy with the dual setup, so that got removed, but I would love to see about upgrading to the new independent setup.


Rick, has Makergear ever considered a trade-in program for upgrading to newer units?
Top

Here is a side by side of the M4 with an M2. It has been, off and on, in development for about a year. 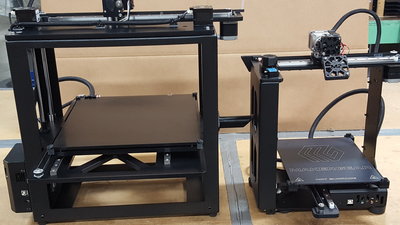 Wow! (Currently out of town....my father has passed.) That is a beautiful looking machine.
Top

Very sorry to hear that Jules. My condolences to you and your family.
Top

rpollack wrote:Here is a side by side of the M4 with an M2. It has been, off and on, in development for about a year.

Rick, it looks like there is no z knob on the m4! It must be on all machines! I use this so often it would be terrible to not have it! I even account for its use in some of my designs.
Perhaps instead of using two ball screws you could just use the same m2 design and make it more robust with larger diameter and slightly longer guide rails paired with a beefier spider... or just bottom mount the motors and have two z knobs, better then nothing. I see other machines occasionally have issues with using two z screws (ie both screws arent exactly the same in straightness or dont equally/accurately turn together, things that may be difficult for you to notice before shipping them out)

As for other thoughts, It looks like the extruder pokes through the top of the frame? How will part cooling fans be used in this design? perhaps from the top thats funneled cleanly down around the extruder drive? Also this makes it difficult to see your first layer, which I really despise about other printers

I do like the board removed and to the side as it minimizes the risk of filament purging in to the fan. Also I've never much cared for the USB cord sticking out so far out front of the machine being further back helps with that.

Do like using two rails for the y axis to greatly reduce play. Hopefully with stainless steel bearing carriages so we dont need to upgrade them ourselves

Without a doubt this needs to have dual heads as well. Preferably with software capable of printing two parts at once as I noted previously.
Top

I like the M4 a lot. Is there any intention to make it independent dual extruder as well? How difficult do you expect that it would be to fit up a titan and v6 on it, now that things are a bit tighter around the hot end?

Things I like about it:
-Dual Z steppers
-more robust frame
-electronics box on the outside of the frame makes it easier to enclose it
-larger footprint and wider stance in terms of the feet for stability
-THE BUILD VOLUME! (the first questions that customers ask are usually 1.how big can you print 2.can you do color)
-dual Y rails

If it goes into production, when would it be available and what price point?
Top

Wow, that M4 looks like a beast. Fantastic design work!

creativedex wrote:Rick, it looks like there is no z knob on the m4! It must be on all machines!

I removed mine - never touch it. Just have the shaft collar.

Digging the M4 for sure. I have made a habit of pushing the M2 X&Y area to the limit. Currently don't have the budget for a big upgrade, but there is a potential for some good paid work on the horizon.
Top
Post Reply
107 posts