How To: Clean the V3b Barrel and Nozzle with a Propane Torch

How To: Clean the V3b Barrel and Nozzle with a Propane Torch

Had what I thought was a clogged barrel and nozzle, so I disassembled the hotend to clean out the brass parts. If you want to take a nozzle assembly apart, read the MakerGear instructions here first. http://makergear.wikidot.com/m2-hotend-assembly

(In addition to the tools listed, you might need to use an additional pair of flat heavy pliers (with no teeth) to break away the aluminum heater block - it was really tight on the one I was working on.)

To clean the barrel you also need a benchtop vise, propane torch, needlenose pliers, and a piece of uncoated coat hanger wire. (To push out the melted clog.) The diameter is just about right to clear the barrel. We did try a perfectly sized wooden skewer as well. (Don't recommend using that though, because it does tend to catch fire. Bit of excitement there!

Hubs agreed to demonstrate the cleanout process so I could take pics.......Here's a pic of him heating the barrel. Heat the tube by moving the torch flame closer, then pull it away to lower the heat. It doesn't take much. Just a couple of seconds. (And obviously you don't want to touch it.) 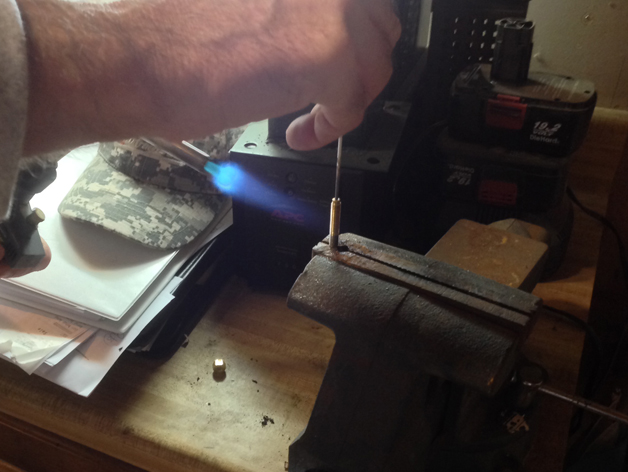 
Use the coat hanger wire to stabilize the barrel in the vise and after heating, use it to push the clog out the bottom of the barrel. 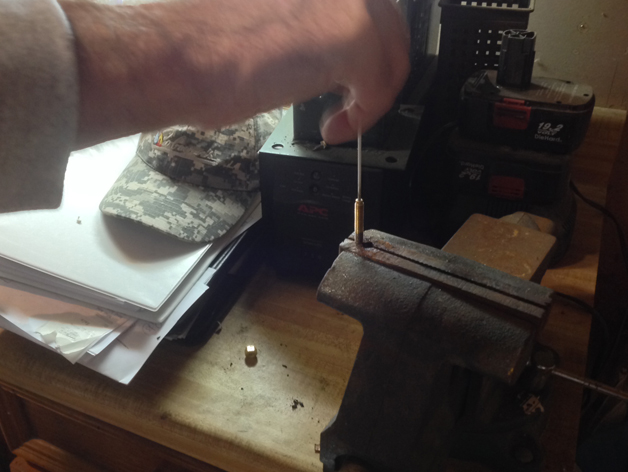 When you are done, use the needlenose pliers to remove the barrel from the vise and clear the clog off of the bottom of the barrel. (The white gob of goo in the photo.) 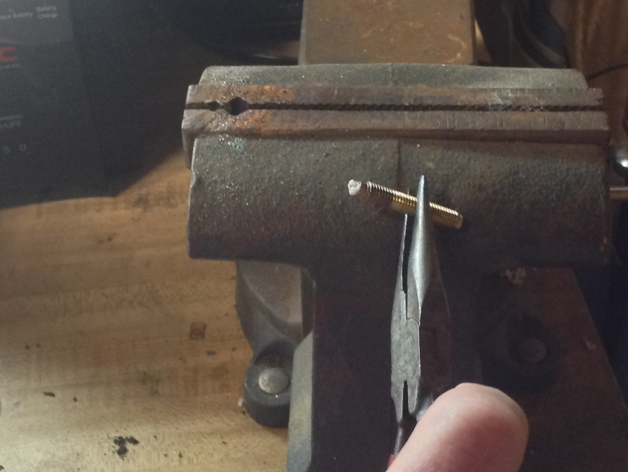 Finally, cool the barrel on an asbestos pad, or run it under some water and check it out - slick as a whistle! 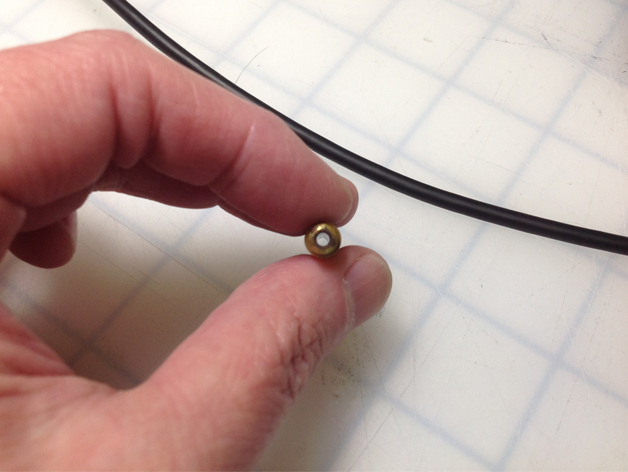 To clear the nozzle, you are better off using an air compressor to blow the heated plastic out, instead of using some kind of tool on the orifice. That ensures that the diameter of the opening stays undamaged, so all the settings should remain consistent.

Unfortunately, I couldn't get in close enough to get a picture of that - aside from it being too small to get a good shot of, I have a healthy respect for blowtorches going off in my face!

But the technique is the same as for the barrel. You heat it for a second or two, then quickly hit it with a blast of compressed air to blow the plastic out the back of the nozzle. It shoots out in a little stream that cools immediately from the air.

There are other ways to clear a clog that do not involve fire, (soaking for several hours in solvents, depending on what kind of plastic you are printing), so this technique isn't for everyone.

The assembly instructions for the barrel and nozzle are clear enough but how do you remove the hot end assembly from the machine. It is probably very simple but I am a bit of a bull and don't want to break it.
Thanks for your help.
Top

1) Heat the hotend to 190C
2) Retract the filament completely (about 50mm, then remove by hand)
3) Cool the hotend to room temperature (~ 25C)
4) Power the machine off at the power supply, disconnect USB (if applicable)
5) Rotate the fan assembly counterclockwise 1/4 turn, this will expose the hotend's groovemount
6) Disconnect the two sets of hotend wires from their harness (unsnap the connectors)
7) Gently pull the hotend straight out, being careful not to tweak it which may crack something
Custom 3D printing for you or your business -- quote [at] pingring.org
Top

I'm assuming you have the V3B?

First retract the filament completely while the nozzle is heated.
Turn it off and unplug the machine.

If there is a zip tie holding the fan wires to the hotend wires, (to the right of the fan assembly), carefully snip it without cutting the wires.
(Sorry, I can't remember if there's supposed to be one there or not, I didn't replace it if there was one there.)

Use the shortest allen wrench to remove the screw in the upper left corner of the small fan. Carefully set the fan assembly, with the white spacer and screw on the X-rail to get it out of the way.

Pull the barrel out, disconnect the two sets of wires at the top that are stamped Heater and Extruder at the little black connectors.

And that's it. When you reconnect the hotend, do everything in reverse, connecting the red wires to the Heater connection and the black wires to the Extruder connection.
Last edited by Jules on Tue Feb 02, 2016 4:11 pm, edited 2 times in total.
Top

Too quick for me Insta!

Thank you very much! I have everything exposed but the barrel won't budge. I thought I had gotten all the filament out but there must be a piece remaining. I have every other tool in the world but at this moment I can't find a razor blade

If it's the first time you've removed it, it can be quite stuck in there.
Custom 3D printing for you or your business -- quote [at] pingring.org
Top

Yeah, Bryan's right......I had to pull mine out with pliers and a hammer as I recall.....(very carefully, of course.)
Top

Thanks to everyone's help I was able to get everything removed from the machine. There was a piece of filament in the top of the barrel which I had to cut off with a razor blade. It is a very tight fit even for thin blade. Once the filament was cut it took a bit of effort but the heater assembly came out.

Removal of the insulated sleeve was very difficult. I was unable to unscrew it by hand no matter how hard I tried. I finally wrapped a piece of rubber around the top and (very carefully) used a small pair of channelocks to unscrew the insulator. That worked. I then cleaned up the threads and screwed the barrel out of the aluminum block. No problem there. I got two 6mm nuts to jam together as per the instructions so that I could remove the nozzle from the barrel. I tightened them snugly and stopped because it felt spongy. I then heated up the barrel and the nozzle with a torch and tried to remove the nozzle. The barrel spun in the jam nuts. I tried to tighten them a little more and the barrel snapped in two. The threaded barrel will not tolerate a lot of force.

I gave up on cleaning the old stuff because fortunately I previously ordered a new barrel and a new nozzle.
So I followed the assembly instructions and everything went together as it should. I reinserted the extruder assembly into the machine, plugged in all the wires and turned on the heat.

I have a roll of ABS that I started using before I had trouble with the nozzle flowing properly so I kept that in. I set the temp. to 240 and bed temp. to 100 and let things warm up. The extruder came up to temperature normally. I went to the jog controls to move some material through the new nozzle. I hit jog 100. It took a moment but finally some material came out of the nozzle. I was disappointed that it came out the same way it did before I "fixed" it. It starts with kind of a loop and then flows somewhat normally. I thought because everything was new, it just needed more material. I hit jog 100 again and nothing came out at all. I can see the filament drive turning but the filament is not moving. I raised the temp. to 245 thinking it may just be too cold. Hit jog 100 again. Still no stream of material coming out. Hit jog 100 again. Nothing.

I turned everything off to let it cool down so I could take a closer look at the extruder thinking I may have a leak somewhere. I did not see any leaks or any obvious problems.

Does anyone have an idea what the heck is going one?

In that case, you jogged too quickly (perhaps with too much tension in the drive gear) and stripped out the filament.

Some plastics just don't tolerate high speed through the nozzle, regardless of temp. There's some official explanation that I don't know, suffice to say not all resins tolerate it.

Retract the filament, snip off the stripped portion, blast some compressed air (a can will work) into the teeth of the drive gear to blow out the shavings, and try again, but slower this time

Make sure you run a filament wiper of some sort. I use a folded paper towel inside a small binder clip clipped around the filament, which is just tight enough to be lifted as the spool rotates (it eventually stops itself on the underside of the filament arm) but nowhere near tight enough to cause any real friction. There are fancier printable systems on Thingiverse that hold sponges, do oiling, etc ... I've found those mostly unnecessary.
Custom 3D printing for you or your business -- quote [at] pingring.org
Top
Post Reply
13 posts