How to: "Not-Splice" Filament on its way into the M2

How to: "Not-Splice" Filament on its way into the M2

I've been doing something ever since i ran into a roll of really brittle PLA filament that was breaking on me in the middle of prints, and I didn't realize that not everyone has had success doing it. It's a method of re-feeding the filament into the drive so that the print is not interrupted, and it works very well for me with PLA filaments. (I'm not sure if it's going to be as successful with ABS or PETG, although i might try a PETG test with it next. Those are a lot more flexible so they might not work as well.)

(Update: Yes it does work for PETG as well, but there is a special trick to it. The PETG process will be described a couple of posts down.)

You might use this technique if you're getting towards the end of a spool, and you want to make sure you have enough filament to finish your print. Or you can use it to change colors without pausing the print - it does not give you as much control over where the color change is going to land on your print, (as does changing the G-code to insert a pause at a specific layer to switch the filament), but you can still get some rather neat effects.

Okay, so on to the test:

I wanted to make it challenging so i deliberately spliced a Hatchbox green PLA filament into a silver ESun PLA based box that i worked up for the purpose. They are not the same diameter, but i wanted to see if it made any difference. (It didn't. The green was 1.75 mm diameter, the silver was 1.72 mm diameter. Neither caused a problem when it was fed in. And the exterior and interior of the printed box are perfectly smooth. I was expecting a slight raised edge when the green band was introduced since the diameter of the filament was different, but it didn't happen - probably a measly 0.03mm difference in the diameter is not enough to make a difference.

Here's what you do:

First, prep your replacement filament for insertion. (Or the new spool you plan to feed in.) Do this by cutting a completely straight/even/flat edge on the end that will be fed into the machine. (Do not try to trim the end at an angle.) 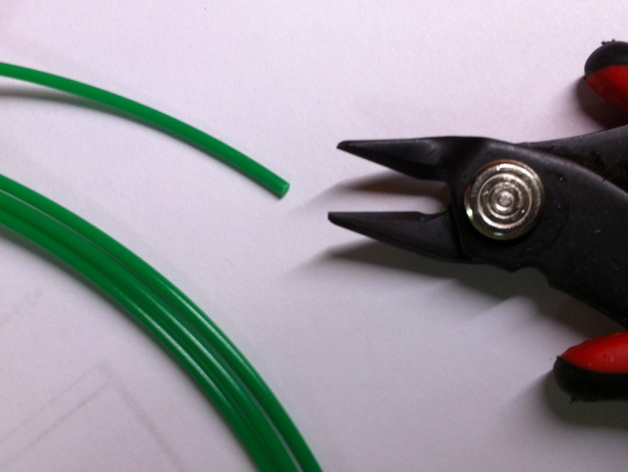 Next, gently straighten the end that will be fed in. Doesn't have to be perfect, but it makes for an easier insertion: 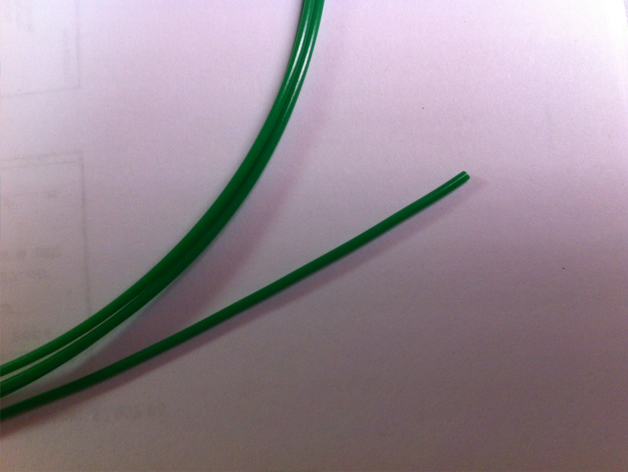 Step three is to cut the end on the filament that is currently in the machine. You can cut it at the spool to give yourself a bit more working time, or you can loosen the tension on the spool a little bit, and pull back the clear guide tube at the filament drive end, and cut it there. (If you choose the second option, have your other filament ready to go.) When you cut the filament, make sure that you cut a flat end on the portion that is still in the machine.

Make sure the end still going into the machine after you cut is flat.
Cut printing filament.jpg (461.75 KiB) Viewed 10638 times

At this point, if you are changing the spool, remove the filament still attached to the machine from the clear tube. (Just pull the loose end up through the clear guide tube and out from the filament drive end, without sticking it into your fan.

) Remove the old spool, put the new spool on the holder, and feed it up through the clear tube and out the other end by several inches, so that you can grab the filament where it comes out of the clear tube.

When the disappearing filament looks like this, get ready to feed the new filament in. As soon as the old filament strand clears the top of the filament drive, you want to follow it in by inserting the new filament end. The ends of both filaments should be flat, they will fit together seamlessly. 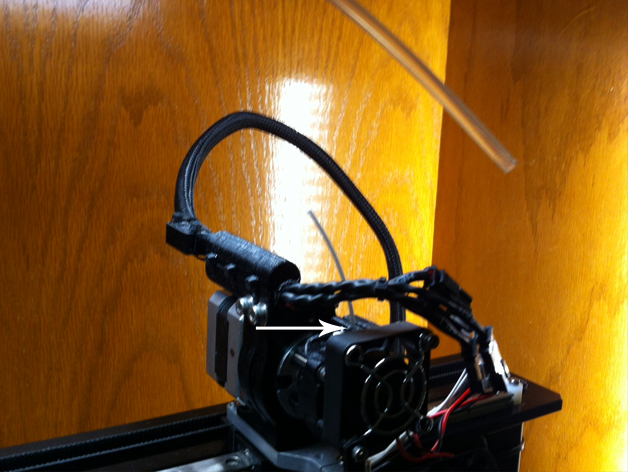 Feed in the new filament, and be prepared to maintain a slight downward pressure on the filament for up to a minute or two, depending on how fast you are printing, and whether or not you are printing infill (which does not move as much material) or printing solid layers (which moves it pretty fast.) You need to give the filament in the nozzle time to be extruded and the new filament time to move into place, and you have to keep light downward pressure on it until it happens. That also means you are going to chase around after the print head - i do apologize for the quality of the photo - but that print head is moving. 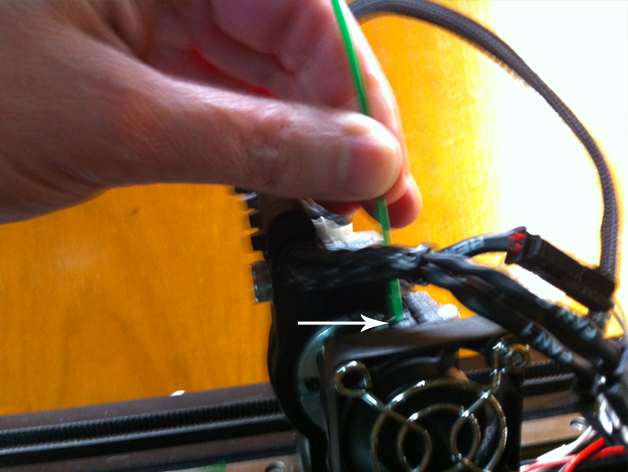 You might feel the new filament catch, you might not. I usually do, but not always. If you don't feel it catch, don't let go, keep maintaining the downward pressure for another minute. If you are using a different color, you will see it start to extrude from one to three minutes after you feed it in. Or you can use the movement of the clear tube to see if the new filament has caught. The end of the clear tube will start to move towards the filament drive as the slack gets taken up in the filament.

Re: How to: "Not-Splice" PLA Filament on its way into the M2 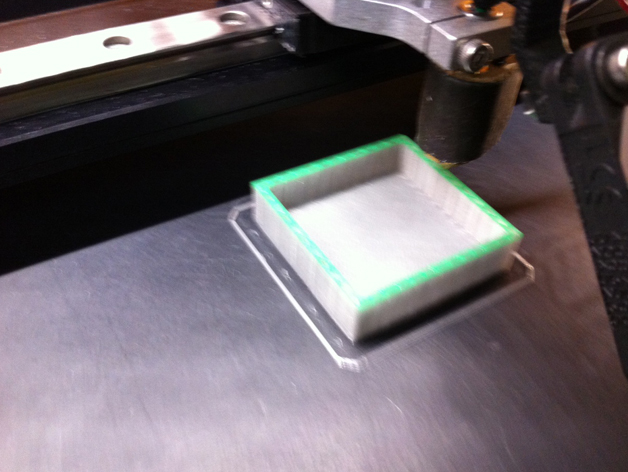 That's about all there is to it really. If you want to make another color swap, just prepare your ends and do it again. 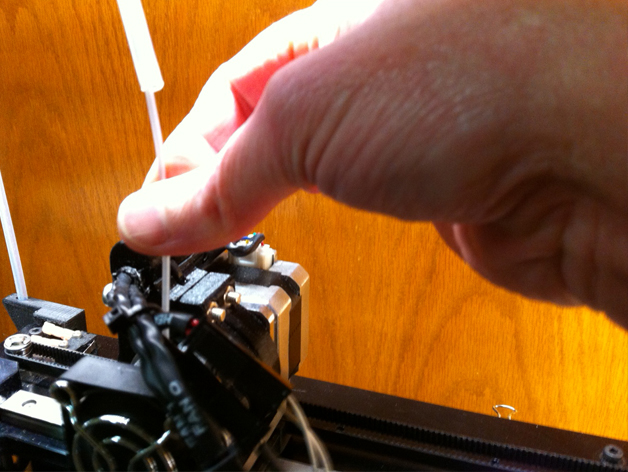 Feeding the silver back in after the green has printed for a while.
Feed second color.jpg (252.25 KiB) Viewed 10635 times

And....ta-daaaah! Houston, we have achieved an embedded color stripe! 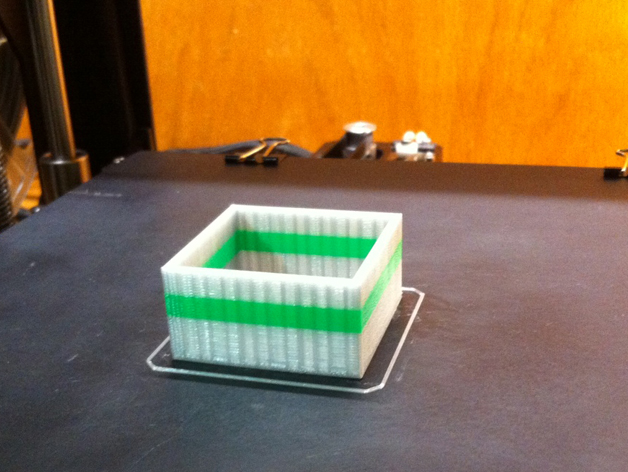 And believe me, if i can do this holding a camera in one hand and taking a photo, while chasing around a print head with the other and keeping downward pressure, anyone can do it.

(Wish you could see the lack of ringing on those corners from the dampers - there is none, but that silver filament is slightly translucent, what you are seeing that looks like vertical stripes is the infill showing through the surface.)

And yes, Virginia, it also works with PETG:

But there's a trick to loading the filament in, necessary due to the retraction settings for PETG. The filament hiccups. Everything else is the same as described above for the PLA prep, (cut the ends flat and straighten the ends to be fed in), but when you push down on the filament, you only maintain the lightest downward pressure while the filament is extruding, and you let it jump when it hits a retraction at the start of a new layer. (So if you can, watch it for a bit to see where those are.)

If your design permits it, turn off the "Perform Retraction During Wipe" setting, and the "Force Retraction Between Layers" setting, it's less jumping, but if you do need the settings, keep them turned on, just be prepared to keep a very light grip on the filament.

And you have to keep much lighter downward force on the PETG filament when you feed it in, not because of the retraction, but because if you press down too hard, you will press the nozzle down into the printed surface and start picking up hairs. It's not too hard to get the feel for it though, and the results are funtastic! 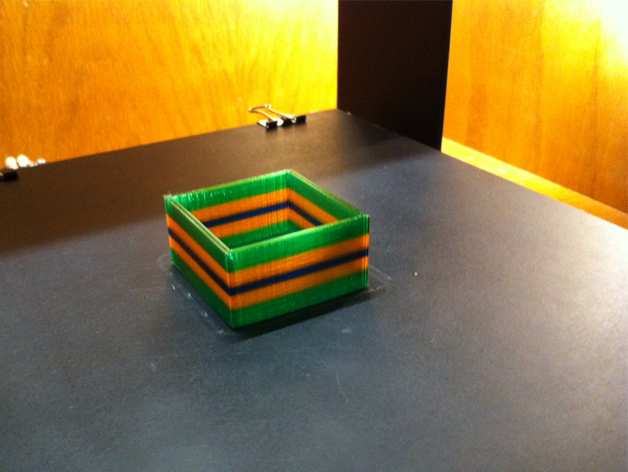 I love this freaking machine!

Thats great. Thanks for the detailed info. Look forward to trying it this weekend.
Top

Slipshine wrote:Thats great. Thanks for the detailed info. Look forward to trying it this weekend.

Thanks! I was hoping someone would want to test it out on a non-important print to see if it works for them too!

Matter of fact, I'll post the little box and you can practice on that if you like - it's about a 35 minute print, so you can get a couple of stripe changes in there easily, without having to spend all day watching it print.

Awesome! I just did this on accident the other night. I didn't realize I was about to run out of filament mid-print. Just chased the old spool with the new. Worked like a charm!
Love Always,
MtG
Top

Mark the Greater wrote:Awesome! I just did this on accident the other night. I didn't realize I was about to run out of filament mid-print. Just chased the old spool with the new. Worked like a charm!

That's how i did it the first time too...totally by accident. Filament snapped at the start of the clear guide tube, and not knowing any better, i just kept pressure on it until the broken end fed in far enough. (That took 15-20 minutes of standing there holding the damned thing though. ROFL! But it did save the print. )
Top

Ha! That's what I started doing. About two minutes in I said F it and just waited for it to get closer to the drive.
Love Always,
MtG
Top

Mark the Greater wrote:Ha! That's what I started doing. About two minutes in I said F it and just waited for it to get closer to the drive.

That was the second time it broke, half an hour later - i learn fast!

Thanks for the write up! This will definitely be useful...I can use up all the almost-gone reels of filament I have lying around without worrying about whether a particular reel will last through a particular print.