Have you tried just taping the plastic?? I have tried tapping PLA+, PETG , Nylon and ABS. ABS by far cuts the nicest, using a tapered tap and cordless drill and some compressed air as the tap is run in and back out. Attached is a part I have made a few hundred of and it is very fast an easy. 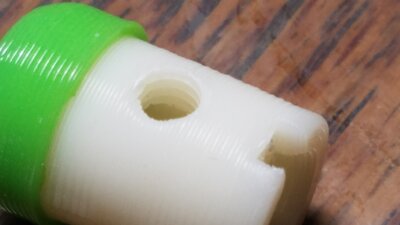 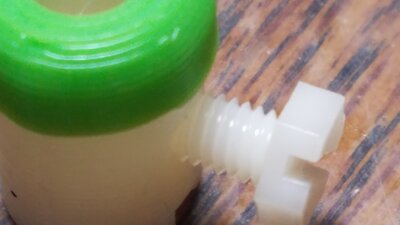 As I said earlier, I do this for large threads all the time. To fit this project, I need 4-40 threads, and they have to withstand multiple assembly/disassembly cycles in the hands of people who think that if tight is a good thing, tighter must be even better...
Top

Gwhite wrote: ↑
Thu Aug 13, 2020 12:34 am
As I said earlier, I do this for large threads all the time. To fit this project, I need 4-40 threads, and they have to withstand multiple assembly/disassembly cycles in the hands of people who think that if tight is a good thing, tighter must be even better...

Yeah I figured that was the case..Hope you get a working process ironed out, nothing worse than post processing time eating into profit. I love the parts that just come off the printer and go into the shipping box!
Top

The last step in refining things was to get the holes for the inserts tuned up. I wanted the top to be beveled to leave room for a bit of ooze, but I also wanted to open up the inside diameter at the top so the inserts could be installed with finger pressure & sit vertically. The initial attempts had the inserts loose, and they would tip over a good bit, which made using the heated press very fussy to get them in straight.

I came up with a stepped design for the hole that looks like this (shown as a 3D plug that I subtract from the inside of the bosses): 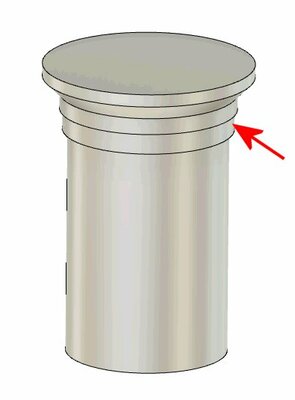 The arrow points to the critical diameter to allow the bottom barb of the insert to press into the hole. I designed a test plate, with four bosses with slightly increasing inner diameters, and printed that: 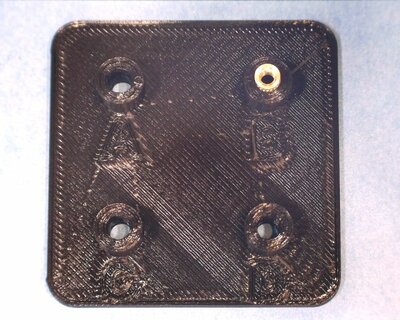 It turns out that option "B" was just right, and allows the inserts to be securely pre-loaded pretty close to vertical for easy installation on the press: 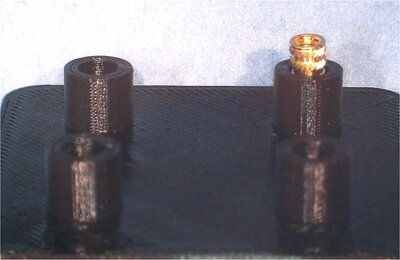 The first circuit housing went very smoothly, with 6 inserts installed. I'm running the tip at about the upper end of the nominal print temperature range. The inserts go in smoothly, but with just a bit of force. There's a tiny bit of "bounce back", where the inset wants to push back out of the hole a little, but if you let the iron/tip sit for a few seconds, that seems to relax & they stay put. They appear to self center nicely, and all the threads lined up very closely with the mating circuit board & hardware holes.

As an aside, the way the OD of the bosses were designed was to find the desired ID for the inserts from the spec sheet, and then add six extrusion widths for the walls. I'm using a 0.35 mm nozzle with a 0.40 extrusion width. With 3 perimeter passes inside & out, you end up with a 2.4 mm thick wall, which gives a good solid boss to hold the inserts.

I don't have an easy way to do pull strength tests, but they appear to be very solid & secure, even with only a 4-40 screw.
Top
Post Reply
14 posts