I introduced this in another thread - my first attempt at a parametric model for Arduino based projects.

This is the print and the two components required: 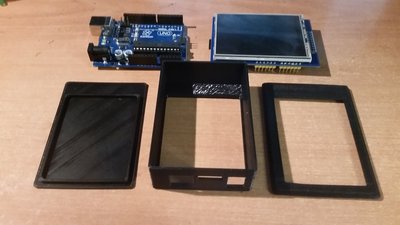 This comprises an Arduino Uno and a touch screen shield which I acquired (eventually) from banggood. It took about 6 weeks to arrive and the first had a huge crack in it, and while it worked as a display, touch screen was broken. I had to wait a further 6 weeks for the replacement, but that one is working great. You'll probably find a more reliable source from adafruit but I baulked at the price

Construction is simply by clicking the parts together so that it eventually looks like: 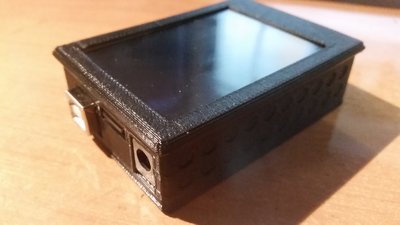 Installing software is done via the Arduino IDE and there are various applications available (if anyone is interested in more details of this, I'll be happy to provide them).

I've posted a thingiverse project at http://www.thingiverse.com/thing:1385953 in case anyone is interested. It also provides a link and instructions for the openjscad based customisation tool.

The customisation tool is a kinda hokey hack, with way too many options available and not really geared up to do much but produce variants of the first project. But I think it's interesting and it's certainly been fun doing. Also more than happy with the printed results and feel that there is quite a bit of scope for the components used than is immediately apparent.

I have some more hacks on this in mind and a few alternative models which use other shields and components, all generated from the same tool, but I haven't really had enough time to develop anything particularly useful with them yet (not that the above is very useful either, but still...

I'm quite sure it could come out better though

(Everything looks pretty lined-up to me!)
Top

Half joking, half serious

- there was a suspicion in the previous thread that my printer isn't completely configured correctly.

But more specifically (and this is where I get a bit technical), I want to extend the case and add on 5 buttons.

Thnk up, down, left, right and fire for some basic games... or just as a general 32 value input

Problem is that the shield only leaves me with 1 pin to use and it is, of course, obscured by the shield itself

However... it's an analogue pin, so with a certain combination of resistors and switches, I can wire up a digital to analogue converter which (should) in theory, allow me to correctly identify which combinations of buttons are currently pressed.

So the problem falls into three parts - exposing that obscured pin, and then wiring up the button circuit, and finally extending the case to allow them to be mounted somewhat sanely.

I *think* I resolved the last part last night... again, if anyone is interested, I'll post some details - think it's quite a clever approach (courtesy of a guy from my hacker group).
Top

I am interested ! Is this for a retro gaming system ?
Print Feed
Top

At this point, I have no idea

Just trying to see what I can do with the hardware and design. I have a few ideas for software, of which simple games do feature, but it won't be capable of emulation afaik - there's a serious lack of memory on the Uno, and I doubt it has the processing power to really do anything beyond the most simple games.

To avoid some hacking, I may switch to a Mega which will give me a ton of free pins and more memory to work with (I got a loan of one last night and was just in the process of measuring up the case - it gives me an additional 2cm on the lid in the current configuration which would allow me to easily place an array of buttons there)
Top

Well, the first attempt at a Mega print came out pretty well: 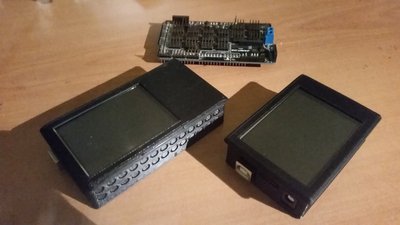 Had to cheat a little to create the lid as the software isn't quite right there (was planning to reorganise the hole specification anyway), but all in all, not too bad. And certainly more than enough space to accommodate the switches as expected (how I'm going to arrange the openjscad model to do that is unknown, but it should be fun trying).

The guy that loaned me the Mega asked for a print which involved the shield at the top, so that'll be the next print.
Top

I got round to sizing up the shield in the picture above last night and modifying the software a little bit too accommodate it (not updated the public openjscad yet). Adds the ability to extend the case on the left and right of the arduino and adds an option for putting a grill on the base. Didn't bother with a lid - seemed like a waste of plastic without knowing which parts of the shield the guy wants to access. 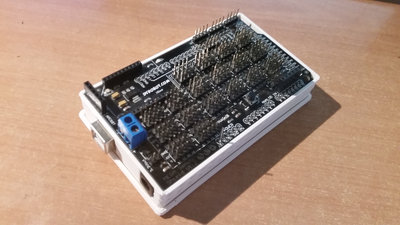 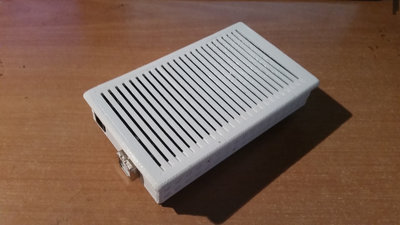 Other than for the purposes of sizing the components and having something which looks nice, I'm not really sure it serves any practical purpose, but the extensions to the openjscad code could be useful for other stuff I have in mind.
Top
Post Reply
9 posts • Page 1 of 1