Printed this one for fun, at high speed but low layer height: 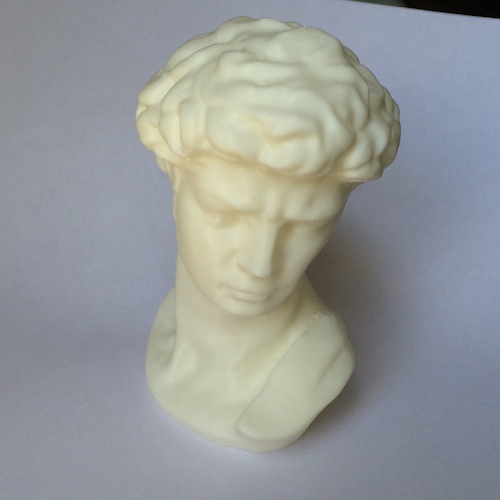 I tried to get a closeup shot to show the fineness of the surface, but it was so smooth it was difficult to get an autofocus lock: 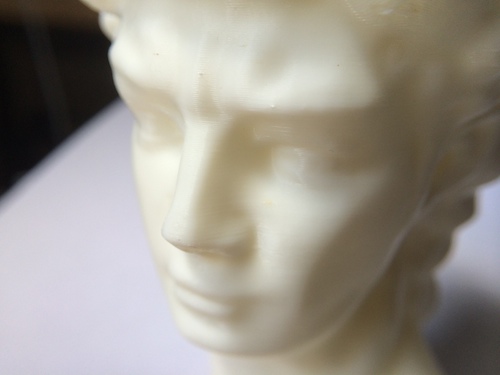 Nice. Is that PLA? Did you get the finish by raising the temp?
Top

ABS. No warping or delamination, which I attribute to three factors:

1. Model is vaguely cylindrical, with no really long runs of straight filament,
2. Support surrounds almost the entire head due to the bouffant hairstyle, insulating somewhat from drafts and trapping bed heat, and
3. I'm printing at .40mm extrusion/.10 mm layer height, which should give very good layer bonding in the perimeter.
Top

man jin that looks good. i cant see any layers in it at all
Top

Does that mean that it works in general for ABS to put a skirt around the whole object that is the height of the object? I've seen that as an option on slic3r and S3D but didn't think it sounded especially useful. Maybe a dense cluster of support structures is even better?
Top

I don't know, I've never tried it. Seemed wasteful. You should try it

I haven't had problems with roundish objects in ABS, and the existence of things like anti-warp designs (http://www.thingiverse.com/thing:254696) makes me think it is linear designs that cause delamination issues.
Top

i have done the skirt as high as the model a few times and saw no difference in warpage or curling. i really did it on smaller parts where i needed some extra layer time.
Top
Post Reply
7 posts • Page 1 of 1