by pyronaught
Granted there's a lot of hardware in this print, but the difficult parts that are normally machined out of aluminum are done in white ABS and are tough enough to hold up to the beating this tool takes. The pin plate has 1/4" solid brass pins that exactly fit into the hole plate, with springs that keep the two separated a specific distance. The brass tubes and pins were press fit into slightly undersized holes using an arbor press, and they are very snug and don't budge even though no glue or epoxy is used.

The way it works is you ram the tube end down into a bucket of damp pyrotechnic composition so that it fills the tubes, then you put the tube ends against the surface of a table and beat on the top piece (the pin plate) with a rubber mallet to compress the pellets. Then you squeeze the two halves together to eject the pellets, or "stars" as they are called in the trade. The process is repeated over and over until you have thousands of stars. Round tubes can also be used to make cylindrical stars, I'm just using square tubes to show off what 3D printing can do that would be pretty difficult to do with metal working tools. This might actually be the first square star pump ever produced 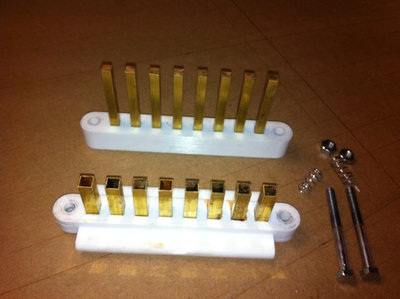 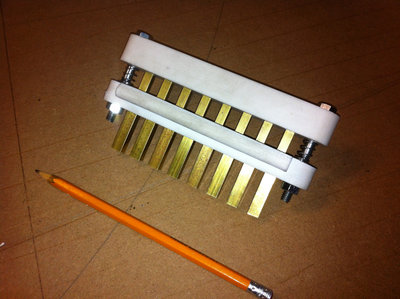 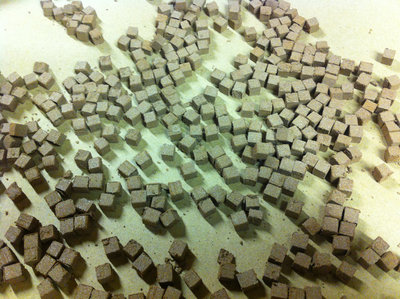 by Tim
I don't want to be living anywhere near you if your house ever catches on fire, but man, you must have some interesting fireworks shows!

by jimc
thats interesting. is this the common way to make these? i saw something once where someone was making them in a revolving drum. sort of like a cement mixer. the more powder added the more the little balls would pick up the powder and they would get larger and larger. i guess sort of like a snow ball rolling down a hill.

by pyronaught
The rolling drum is by far the most common method because it mass produces them and can also be used to make color changing stars by switching to different colors while rolling. Thus only round stars can do color changes. The square stars are a European method and usually they are made by just pressing slabs of composition and then chopping them up with a long blade. That takes skill to get consistent results though, whereas anyone can get perfect square stars using the hand pump above. It is just slower than chopping them.

I've designed seven different rolling machines too. The latest one was made from a bike frame and two large stainless salad bowls seen below. I post plans for how to build these on my website at passfire.com. I try to stick with commonly available hardware store parts as much as possible and avoid requiring expensive metal working tools to make the projects more accessible. 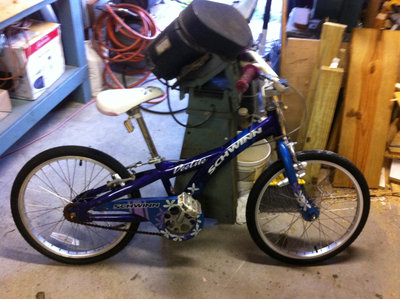 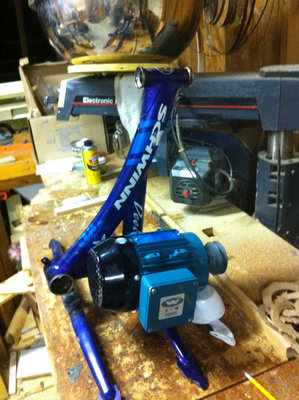 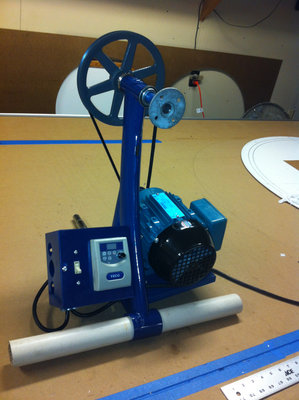 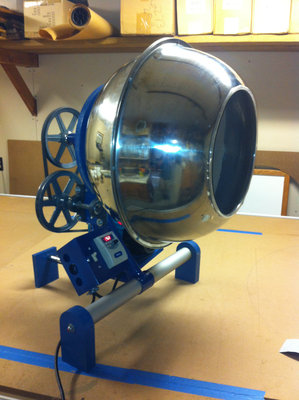 by jimc
thats cool. thanks for sharing.

by willnewton
Are you doing pyrotechnics for a hobby or profession? I love your roller as much for how it was made as I do the final result. It reminds me of the machines I have seen in candy factories.

by pyronaught
I do it as a hobby, but have gotten very pro at doing it. I can make pretty much anything you see in a real show, plus a lot of things you'll never see in a public display. I don't store anything on my property though. Most fireworks hobbyists actually know more about fireworks than the people who shoot the shows professionally. There are barely any real companies making commercial fireworks in America since it is impossible to compete with China and then you have a bunch of government regulatory agencies who like to use the fireworks industry as a whipping boy for their job security and feel-good "safety" propaganda. There was a time when a lot of Italian immigrants made great fireworks here, but those days are gone-- just like so many other industries that have been crushed under the weight of government regulation and China. Even companies that just shoot fireworks have been getting pushed out of business after the onslaught of new regulations that were dumped on them after 9-11.

The rollers that candy makers and drug companies use for coating pills do operate the same way and are just larger versions. Jelly beans are made in big drums using the same principle. Chocolate coated nuts of all kinds are rolled in big drums as the chocolate gets sprayed on, except they have big tubes that blow in cold air to harden the chocolate faster.

Here's a fiberglass version I built a while back. This video actually shows it being used to make a batch of stars:

by Jules
Yeah, i can just imagine the regulations necessary to do something like that professionally now.

Coolest of hobbies though! Do the square stars explode in a different pattern/shape than the round ones?

Jules wrote:Yeah, i can just imagine the regulations necessary to do something like that professionally now.

Coolest of hobbies though! Do the square stars explode in a different pattern/shape than the round ones?

The stars just burn with a specific effect, such as a color or some kind of tailed streamer. They are arranged on the inside wall of the shells so that they get thrown out as shrapnel when the shell explodes, then their effect is seen moving through the air. For example, the cubes in the picture above burn bright red, so you would see red points of light spreading out in a spherical pattern. If I added flakes of titanium to the red mixture, that would add white sparks that get left in the wake as the star moves through the air, creating a silver tail. Metal powders increase brightness, while larger metal flakes create spark tails. Carbon particles such as charcoal or lampblack create thicker, dim gold tails. It's also possible to create strobe effects with formulas that burn in short bursts of light with delays in between. There's hundreds of formulas for all different kinds of effects.

Here's a video showing the formula above: https://www.youtube.com/watch?v=8EfN4_2HE3U

The first red one is with no titanium flakes, while the third shell is the same red with titanium added. The silver one is what you get when lots of aluminum flakes are used in a non-color formula.

by Jules
Beautiful! What an awesome hobby!