I used MakerBot True White PLA for this print with the same S3D settings I use for the MakerGear black PLA. Even though I'm not particularly concerned about aesthetics on this print, the box looks really nice. Each outlet is powered through an independent 250V/10A relay, controlled via USB. 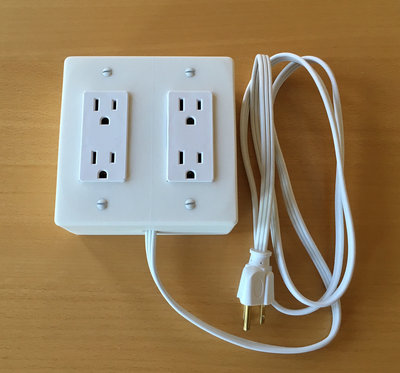 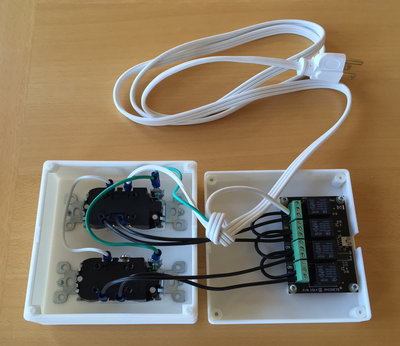 You've inspired me on this one and I'm vaguely looking at setting up something similar here.

I have a 4 port relay, but it's not directly controllable by USB. They are fairly trivial to control by way of an Arduino though and I have a few Nano's here - cheap clones - 5 for 15 euros kinda things - so happy to sacrifice one as it may work out quite well for some lighting in my basement.

Unsure about the control of it though - it would be nice if it were kinda self contained (ie: no requirement to add a fixed computer into the mix), so vaguely considering infrared, bluetooth or network (would prefer one of the latter as it doesn't require line of sight and could be controlled from my tablet/phone). Alternatively, I could probably use a Raspberry Pi (preferably a Zero if I could get hold of one...). Also been toying with the idea of just hacking up a clap clap switch of some sort to do it - having a working prototype of that, but it's not very reliable at the moment.

I didn't find double sockets like you have them though - all rather clumsy single sockets, so I suspect it'll make a larger box to shove it all into

The current set up uses Chacon Dio's and while they work OK, I'm constantly searching for the bloody remote

. Controlling it from the phone, tablet or even hacking my media player to incorporate the functionality somehow would be kinda fun at least and it would free up the equipment for another use which I had in mind. 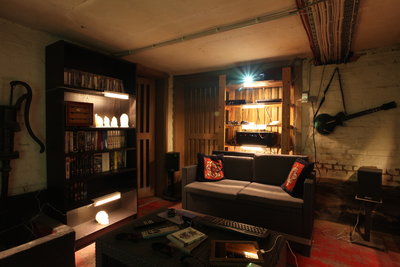 and it's the lights (Ikea Dioders) which are obscured by the white paper which I would like to have more control over.

- they're there to keep the light from the shelves bleeding on to the projector screen, but don't do a great job.
Top

I'm also using a commercial product to control lights... the WeMo product line from Belkin has a number of devices that plug into outlets or replace wall mounted light switches and can be controlled by their smartphone app, a number of third-party apps (which run on either a smartphone or computer), or can be controlled with the UPnP standard via HTTP requests. I think they make a European version of their product line (I'm obviously using the US version).

For this application I needed something different though. My house in Southern California is subject to occasional power and/or internet disruptions. Most of the time my router and modem reboot properly and reconnect to the internet, but sometimes one or the other needs to be manually power cycled. Easy enough to do when I'm physically present, not easy to do when I'm away (which is fairly frequently). So what I needed was a number of normally closed relays that could be accessed remotely to power cycle the router, modem, WiFi node (which sometimes crashes and needs to be power cycled too).

I'm a big fan of the Raspberry Pi, and I have a number of them performing multiple duties... I decided not to mount the Pi inside the outlet box so it would be accessible to perform other duties. The relay is a Phidgets 1014_2. I also use a Pi as an answering machine... through the answering machine, I can dial in remotely and enter a code that will power cycle any of the four outlets for a specified number of seconds. I'm also working on a program for the Pi that will check internet connectivity on a regular basis, and if it is down for more than a certain period of time will power cycle the router and modem automatically.
Top

Yeah, can see how the direct USB control of the relay would be better for you. I guess I could just expose a bunch of wires and have them connect to the relay, and plug them into the GPIO of the external Pi... or an Arduino for that matter. 6 pins on the relay, so not entirely unreasonable.

I have a Pi in the room there - it's running openelec/kodi. Makes it's a bit awkward to customise, but there are ways round that I guess.
Top

Looks to me like this should work quite well. I created a small connector for the pins like: 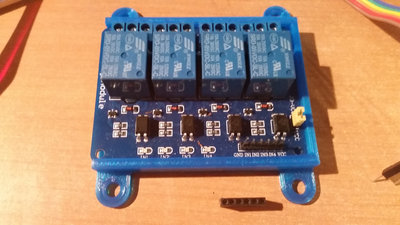 Wired up, it provides a surprisingly robust connection - I can comfortably pick it up by the wires without them falling out or losing connection with the pins: 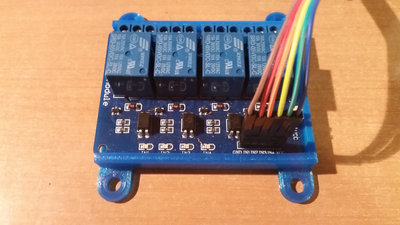 charles.yates wrote:Unsure about the control of it though - it would be nice if it were kinda self contained (ie: no requirement to add a fixed computer into the mix), so vaguely considering infrared, bluetooth or network (would prefer one of the latter as it doesn't require line of sight and could be controlled from my tablet/phone). Alternatively, I could probably use a Raspberry Pi (preferably a Zero if I could get hold of one...). Also been toying with the idea of just hacking up a clap clap switch of some sort to do it - having a working prototype of that, but it's not very reliable at the moment.

How about using a Photon from http://www.particle.io/ ? For $19 USD, you get a 24-pin DIP micro board with wi-fi, and the cloud service is included. There are about 14 or so of the pins available as GPIO, most can be PWMed. Two pins can be full 12-bit DtoA as well. The online development libraries include calls to publish events to the cloud and receive events from the cloud that trigger function calls. Get the book for it, too -- you'll want that to understand the cloud service and how to leverage sites like IFTTT (if this then that). There's also a smartphone app that lets you peek at pin states and poke pins as well. I had a "recipe" set up on IFTTT which, whenever I received a gmail, sent the subject line to my Photon, which then beeped it in morse code.

Right now, I'm using mine as a "Replay" light switch. Think of a regular wall switch with three positions. In the down position, it turns the light off (and remembers the light is off in a buffer). In the up position, it turns the light on (and remembers it's on). In the middle position, it "replays" the on and off states for the last week. Imagine such switches all over your house. When you are home, use the switches like normal. When you go on vacation, just go around the house and set all the switches to the middle position, and your house lights do what they did for the last week, over and over, looking exactly as they did when you were home.