Have some camera club folks working an art fair this weekend. Wanted them to have some bling that might prompt an inquiry about the club.

Printed these from Hatchbox orange PETG. The frame snaps onto the back. The image is printed on cheap photo paper and sandwiched between the frame and the back. The pin on the back drops over small printed protrusions and I melted them down to secure the pin in place. I used my soldering iron at 225C and laid a piece of non-stick backing paper from a sticker over the plastic before melting it with the iron. The first one I tried, the PETG stuck to the soldering iron rather than forming a head. These are about 3" square. I printed up a dozen of them. 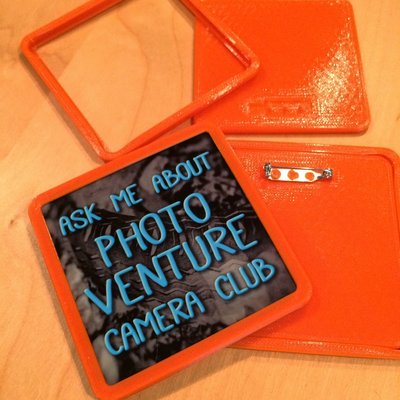 Nice! (I like how you attached the pin back....I might use that for something down the road.)

Looks very nice. Some ideas (not suggestions, your badges are fine as they are):