I haven't been using my M2 very much lately but tried a couple prints today in advance of "showing it off" to someone looking to make a purchase for a local school. The M2 has been great so I made the recommendation for them to get the M2 without hesitation. I am having some issues obtaining the quality of prints that I use to in the past. I am trying to analyse what has changed and it seems that everything but the M2 has. My computer crashed so I re installed and now have the latest Simplify3D. The settings I use to use were lost but they were basically ones that I had downloaded "rsilvers - M2_PLA_0.20mm_High_Quality-v1.0" which I have attached. I re-downloaded the file and got everything setup, loaded the filament and tried to print. I am using Red Makergear PLA that has been properly stored. I am getting allot of extra ooze during travel. I am also getting blobs at start points that are quite noticeable as its printing. The layer does look smooth but instead rough. I think the rough look is more along the sides of each line it lays down. The bottom of the print has a pronounces edge to it. I triple checked the bed for level and the z stop. I have it set to .008" which is what it has been at in the past. The glass is clean and adhesion seems ok. I expect that it is my settings and not a problem with the M2 itself but is there anything on the M2 I should check? It has not been disturbed at all since its last use which has a been a couple months. If anyone would be so kind to offer some suggestions or even another profile to try I would appreciate it.

What is the best items to print that help identify and tweak quality issues? I will download them and try a print or 2 and can post some pictures to assist diagnosis. 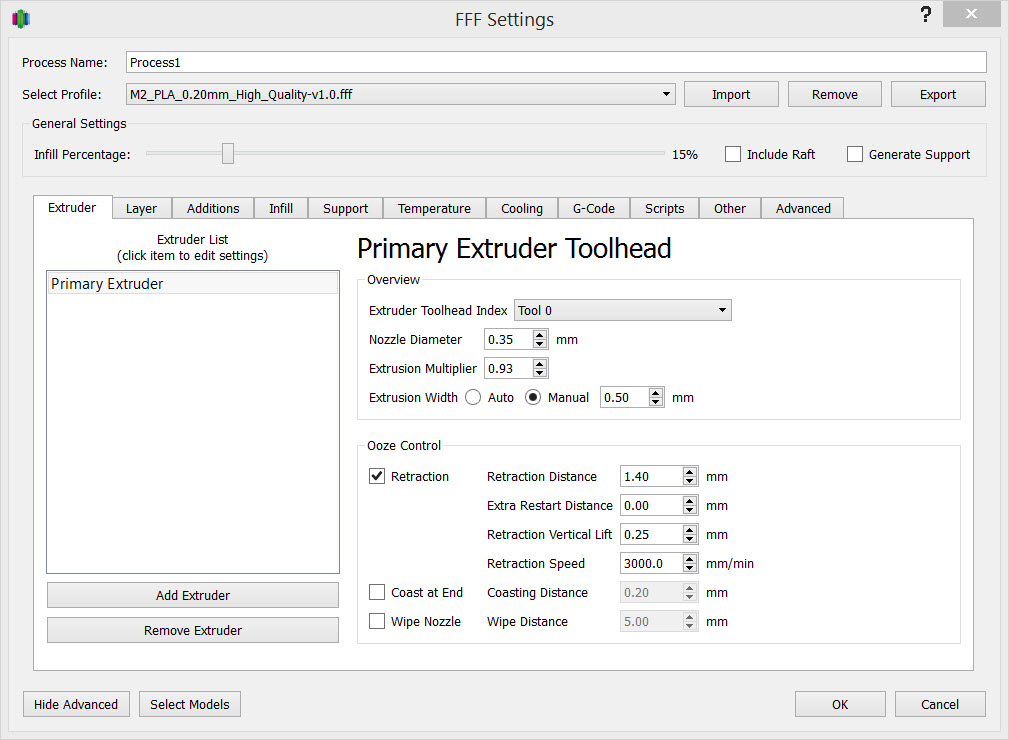 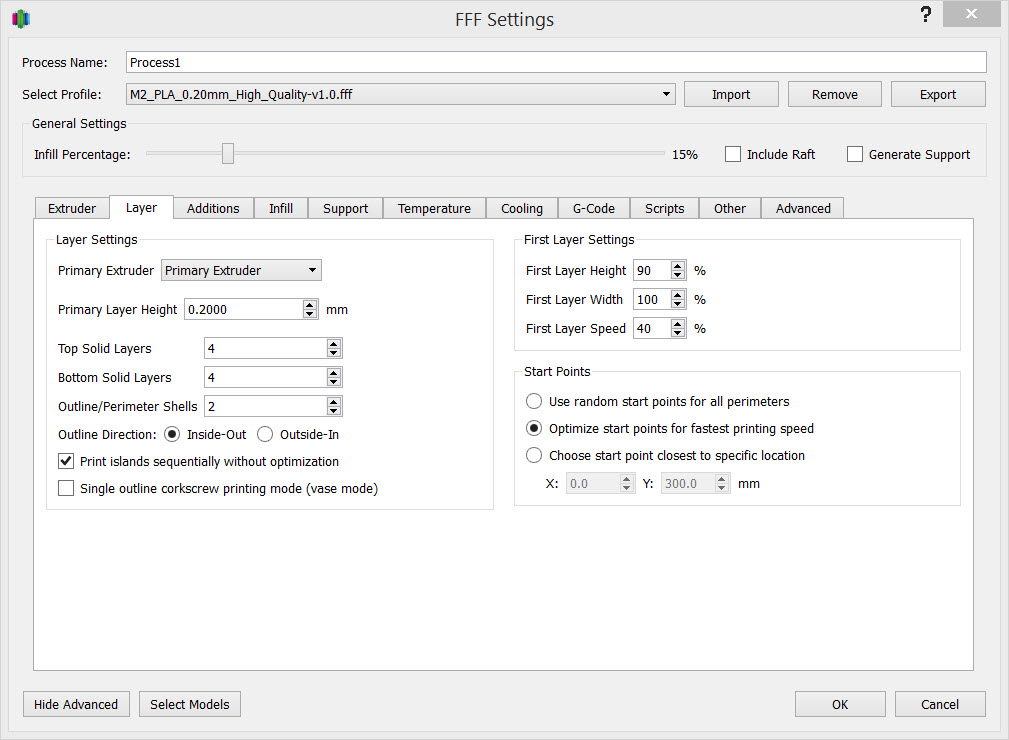 Hi Keith. Since none of the print masters have chimed in yet, I will try and help you out. I am currently printing with the white MakerGear PLA, so I am not sure if its really different then the red in terms of settings. Can you upload the stl that you are trying to print. Also, it would be helpful to see the actual print you are trying to debug.

Yes, photos of the model with the issues you're trying to fix would be helpful. Your settings seem fine, and if you've printed with them before without issue, I wouldn't look there first. You've already preempted the first two common suggestions, though, by saying you've checked your bed height and that your PLA was properly stored. What does "properly stored" mean to you, though? PLA is aggressive at picking up moisture.
Top

jsc wrote:Yes, photos of the model with the issues you're trying to fix would be helpful. Your settings seem fine, and if you've printed with them before without issue, I wouldn't look there first. You've already preempted the first two common suggestions, though, by saying you've checked your bed height and that your PLA was properly stored. What does "properly stored" mean to you, though? PLA is aggressive at picking up moisture.

I store it in a sealed pet food container (picture below) with an Eva-Dry inside. I have printed a couple of more items watching things closely as the first few layer go down and noticed that the extraction became erratic each time shortly after the print began. I put my hand on the filament to make sure it was feeding and it didn't feel quite right so I tightened the tension screw a little. That along with lowering the temperature slightly has improved the prints which is good. What are the symptoms of a clogged nozzle? How do you guys gauge the tension, just my the teeth marks in the filament?

I tried another print and the extrusion slowed down just after the first layer again. As the print continued the extrusion basically stopped for almost 1/2 of the layer and then started again and hasn't stopped since. It seems like the transition from the slow speed of the 1st layer (40%) to full speed (100%) is when it stops feeding properly and ultimate stops extruding. I am not sure if that still correlates with the tension screw or possibly points to a clogged head. I verified that the filament comes off the roll OK as I have seen it get a little tight on certain spools in the past. It is interesting that it just starts back after missing half a layer. I applied a small amount of pressure to the filament as it enters the head this last time but it still didn't feed. It was a few moments after I let up that it began. On previous prints I applied no pressure so it wasnt the pressure that got it going, strange.

KeithA wrote:the extrusion basically stopped for almost 1/2 of the layer and then started again

Perhaps the extruder motor drive pinion is wearing out and beginning to slip:
viewtopic.php?f=7&t=175&start=20#p1375

As a quick check, mark both the stepper shaft at the rear of the motor and the shaft inside the filament drive gear. Then, the next time it stops extruding properly, if the motor shaft is turning and the drive gear isn't, you'll know exactly what's wrong...
--
Ed
http://softsolder.com
Top

Hello everyone. I didn't want to start a new thread. Can anybody tell me pls what causes this? I also included my settings. Print with ABS, 245 degrees, heated bed. 0.35 nozzle 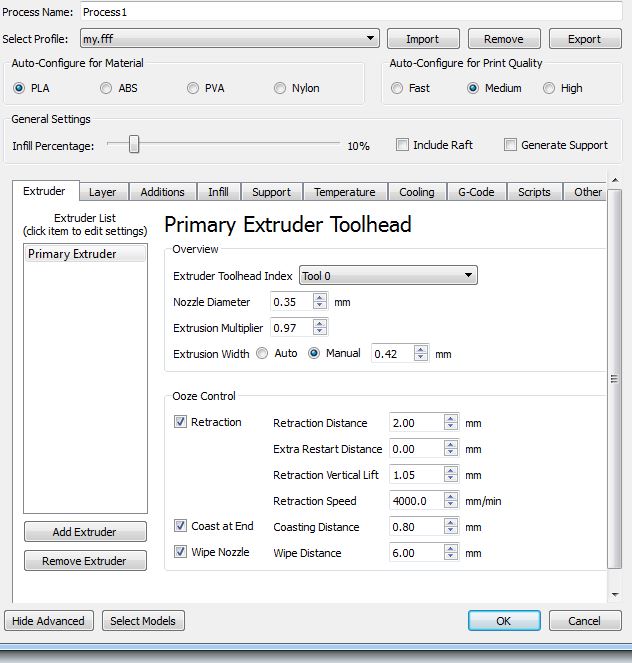 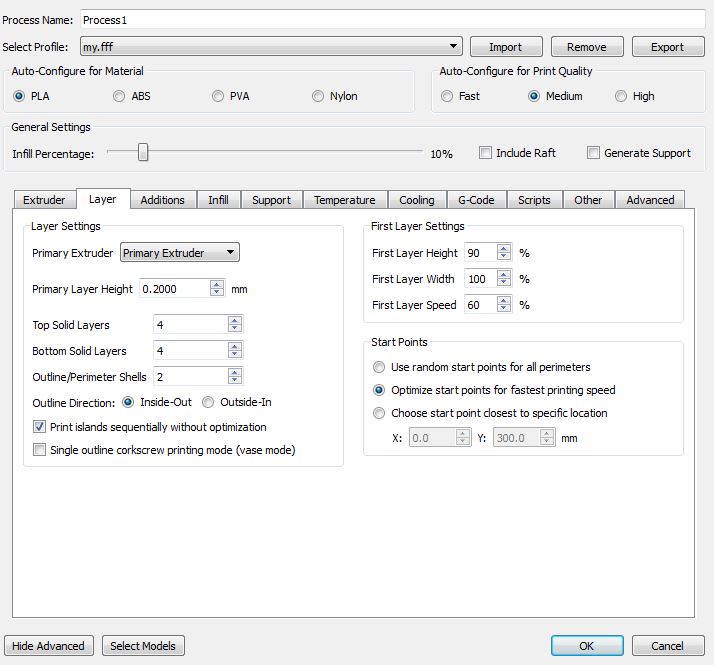 It's a good idea to start a new thread for a new problem that's unrelated to the previous problem and discussions.

"Optimize start points for fastest printing speed" makes the seam position depend on the rest of the the layer, producing the semi-aligned pattern you're getting.

"Outline Direction: Inside-Out" means that excess plastic on the perimeter thread can only go outward, which tends to accentuate the seam.

The zits most likely occur at the end of the perimeter thread, where the nozzle pauses while retracting. The "Coasting Distance = 0.8 mm" may not allow enough time to depressurize the hot end; increasing that should reduce the zit size.

The "Retraction Distance = 2.0 mm" may be a bit too high, because there's no point in retracting after the drool stops. Reducing the distance also reduces the time the nozzle spends at that spot, which reduces the amount of heated plastic.

The "Retraction Vertical Lift = 1.05 mm" lifts the nozzle at the end of each layer and lowers it at the start of the next one. Because the Z axis has low speed and feeble acceleration, that means the nozzle spends plenty of time at that spot. If you don't absolutely need axis motion to avoid another problem, turning it off should improve performance and print quality.

The "Wipe Distance = 6 mm" moves the nozzle over the existing perimeter, but without extruding. That may contribute to the zit's width, because it's smearing the remainder of the pressurized plastic across the top of the perimeter thread.

I'd start by increasing the Coasting Distance, then reducing Retraction Distance: change one thing at a time and measure the results!
--
Ed
http://softsolder.com
Top

I'd start by increasing the Coasting Distance, then reducing Retraction Distance: change one thing at a time and measure the results!