by bignordique
I've had this problem for quite a while now. It doesn't always happen, but often enough to deserve attention.

The bad news is it always happens at the very end of a print (last nights 14 hour print for example). The good news is I can usually salvage the printed objects.

This morning near the end of an overnight run, I heard the M2 make an unusual clunking sound and could visually see the problem while the print was still underway. I don't usually hear/see the actual problem underway. 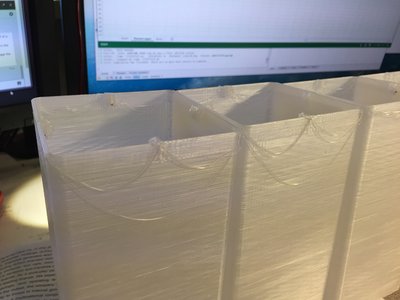 You don't have to look too closely to see the filament draping off the side of the objects.

For reasons uncertain, it always slips in the positive Y direction. And always near the end of the print.

it might be relevant that the Y axis moves the mass of the objects. But, I print these objects at different heights, sometimes 1 up and sometimes 4 up. I don't have a strong correlation to mass on the build plate. It might be there, but the qualitatively, it doesn't appear so.

The problem is strongly correlated to the top of these objects. And as I mentioned, I print these at different heights. The one pictured are nearly the tallest ones. But I've seen the problem with shorter ones as well.

The top of these objects have these lugs for mounting with screws. In the process of printing these lugs the M2 is required to slew between different points on the object. I'm fairly confident the problem has to do with this slewing.

Here's the speed page from Slic3r: 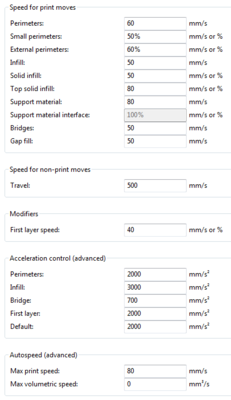 Not so sure where this came from... I've generally only adjusted speeds for the print moves to get the look I want with the transparent PETg.

Since F=MA, it is probably acceleration related. I did notice a higher acceleration number for infill. There is some infill in this print.

I don't have any idea if the acceleration numbers here are good or bad. Maybe some experts out there on the forum can render an opinion?

One of difficulties here is the M2 doesn't always do this. So its hard to lightswitch the problem. Which is one of the reasons I'm asking the forum.

And finally I did check the belts. They seem reasonably taut. I haven't seen a spec for belt tightness... perhaps I haven't looked in the right places??

by Bratag
I might be crazy but I thought that Jimc or someone traced something like this to a marlin setting.... does anyone remember the thread for that?

by PcS
Check belt tension. Slow non print moves speed down and add z hop. The print gets heavier towards the end and the mass becomes a problem. I have done full build volume prints that take over 40 hours without issue with sensible speeds dialed in. You will have to experiment. Good luck.

by Kulturfolger
My printing exceed the given speeds. Its more likely an software error, I had it, too. The mass off you print is irrelavant against the weight of the y assembly.

by bignordique
After spending several months attempting to eliminate all other possible causes... I'm ready to give the firmware a try.

I've done enough software upgrades to approach this with considerable trepidation. Mucking with the firmware/software is a good way to turn a largely functional piece of equipment into a headache.

Apparently, the suspected bug is in the Arduino IDE, which apparently sports a compiler. I have no experience with the Aurduino IDE. Firmware upgrades usually involve updating a binary bit file and bugs are not usually ascribed the IDE or compiler.

So, before I step into this potential minefield, I would like to make as certain as I can that I'm fixing a possible cause of the problem. Specifically, is there any way to query the M2 for firmware version, and even more importantly, the IDE version used to install said firmware?

by Vandal968
bignordique, I was having these problem as well. It seems to require two things to occur. There has to be a certain amount of weight on the build platform and rapid acceleration must be commanded. If both of these conditions are not met, Y-axis doesn't skip. Your skips at different heights are probably because the build is meeting the large-mass requirement, but until it gets to the lugs, the acceleration is not great enough to cause the issue (doing outlines is pretty sedate). The fix is simply to lower the max acceleration values in the scripts section of S3D. I'm using the values below and I've printed large objects (14hr prints) without skipping. Smaller objects are far more forgiving (less mass) and you can get away with far higher acceleration values if you only print small things. I did several experiments and zeroed in on max acceleration values per mass and the observations matched the predictions and the math, it's in one of the several threads about Y-axis skipping. There are those who claim that mass has nothing to do with it (these people are wrong), but they fix the issue in the same way, either by reducing max speed (greatly increases print times) or by reducing acceleration (slightly increases print times).

Note also that there was a Marlin bug which caused similar problems (actually an IDE issue), and there are other things that can cause this as well, mechanical issues, etc.

by jsc
I agree with vandal. If it were the firmware issue, you would be seeing it consistently. And if you haven't messed with your firmware, you shouldn't be running into that at all.

Note that slic3r has settings to adjust acceleration, so you should use those instead of trying to override in startup gcode.

Just set all values to 1000 and see if it fixes your problem. You should also get somewhat less ghosting.

I'm willing to bet you lost a step trying to move the build plate at white-knuckle speeds. either the belt slipped or the stepper lost a step. the rubber dampers that everyone here is obsessed with, drop your travel speed to 200mm/s (you can't keep as much tension on the belts with rubber dampers installed.
All times are UTC+01:00
Page 1 of 1
Powered by phpBB® Forum Software © phpBB Limited
https://www.phpbb.com/