by ryaneb85
I printed an object that fills the entire print bed, and while the first few layers went down well, I woke up this morning to find the print had warped at the corners quite significantly. I was quite surprised to see this as the corners have a fairly large radius and the first layer was squished well. This was printed on top of a MIC6 and PEI sheet that has been lightly sanded. Print temp is 213 and bed temp is 50, 2 outer layers and 4 bottom layers. Here's a few pics: 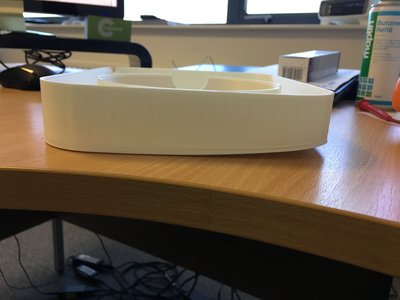 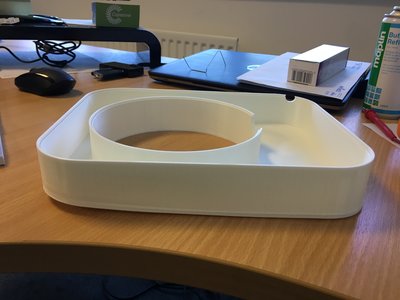 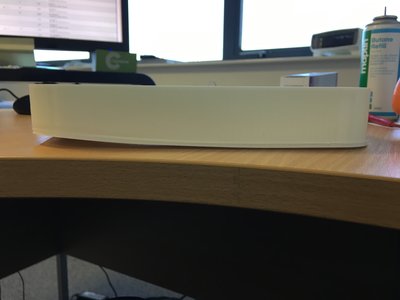 Before I re-attempt it with a few tweaks, I was hoping to get some input on how to eliminate the warping. Should I try lowering print temp, increasing bed temp, lowering cooling, or a combination of the lot?! I'm also going to try sanding with a slightly coarser paper in order to provide more tooth and go for a bit more squish on the first layer, but after that I am at a loss.

Here is a video of the first layer which shows its going down pretty well.

by thunderbt3
Was it printed in ABS? Typically, thin walls and ABS usually leads to warpage and cracking if it wasn't printed in some sort of enclosure to keep the surrounding temperature stable.

Plastic shrinks as it cools, so those tall walls want to be much shorter than the flat base on the platform. Two walls pull on each corner, with the resulting force aimed inward (toward the bisector of the wall angle). That force pulls the corner up and off the platform. There is no good solution, because ... the force isn't with you.

It's worse when the edges have stylin' bevels / chamfers / rounding that reduce platform contact directly under the walls, giving the forces a running start on pulling the bottom off the platform. It's not obvious what the original design looked like, but the corners suggest a smooth outline.

Things to try that probably won't work: You can try to redesign the part with the limitations of 3D printing in mind, perhaps by chopping it into several parts across planes parallel to the platform: Add alignment features / pegs across the joints to help produce flush wall joints, print in many sessions, glue the parts together, (maybe) success! Shorter wall sections will reduce the forces trying to rip their bases off the platform, so that an outward brim might hold them in place.

by 3dPrintingMD
Personally I would use hairspray on the MIC6 Plate, and forget about the PEI.

by ryaneb85
This was printed in PLA with no fancy bevels etc. It's a shame to hear that it might not print well. This is a personal project and I purposely avoided sharp corners thinking they were much more likely to warp than rounded corners, but it sounds like corners full stop are not good!

Do you know how many layers work best for mouse ears? I've tried them before with 1 or 2 layers, but they didn't make much of a difference. Maybe it's the thicker the better!

by Jules
If it's a thin full bed print with PLA....I will sometimes add hairspray onto the PEI sheet directly. I don't need to do it often, but it does make everything stick well everywhere, and if it's a warp-prone print (like that one) you need to increase the sticking power.

Increasing the infill also helps to keep it from twisting after it cools.

by ryaneb85
hmm thanks Jules. I may try some hairspray tonight. I thought a layer of hairspray would cover the PEI and basically negate it's effects.

Is bed temperature going to make any difference? In my mind making it hotter is going to make things worse, as the temperature differential will be higher, but I've seen other suggestions saying it makes it better. Maybe it's stickier when it's hotter?!

It's the surface area in contact with the platform, rather than the thickness, that matters: two layers should be stiff enough to anchor the wall, if the ear doesn't detach from the platform. However, if the walls apply more force to the ear than the platform, then the ear will pull loose, no matter how thick it is. Making the ears big enough ("elephant" rather than "mouse") will do what you need.


the walls would print fine without the bottom plate

Definitely not: they're already exerting more force on the corners than the plate can counter: reducing the footprint to almost nothing won't help.

If you're doing separate walls, turn the ears into complete circles at the corners. That will provide the same area outside the wall, plus add stiffness inside where there's still some lifting force.

Reducing the wall height, perhaps by cutting it in thirds and printing the pieces (and the base) separately, should improve the situation. After that, ears / circles may provide enough adhesion to anchor the corners.

by ryaneb85
ok thanks Ed, I think I'll try to give ears a go first. Although the bed is almost all in use, so I'll just have to fit in what I can where I can!

by jsc
If this is an object of your own design, you can also try incorporating some anti-warp features. I've seen people experimenting with accordioned walls to reduce the pulling forces, or you could try introducing a vertical slit in the walls on both sides of a corner.
All times are UTC+01:00
Page 1 of 1
Powered by phpBB® Forum Software © phpBB Limited
https://www.phpbb.com/