Never encountered this issue before. One photo is of a print made before removing the hot end and extruder drive body, the other is the same part printed with same settings and same filament spool after reassembly. Same extruder drive body and hot end. Note how at regular intervals of layer heights the wall creeps further and further out until it resets and repeats. The position error is with the Y axis with no noticeable issues in X axis. The irregularity repeats at a frequency of 8 layers with the line position moving out step by step then returning step by step. Checked security of all hardware removed, seems good. Anybody encounter this? Suggestions? 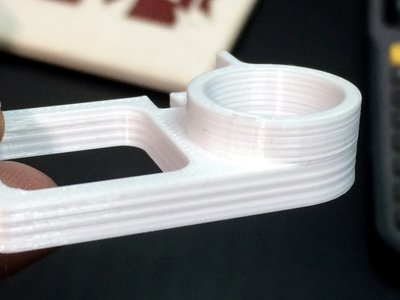 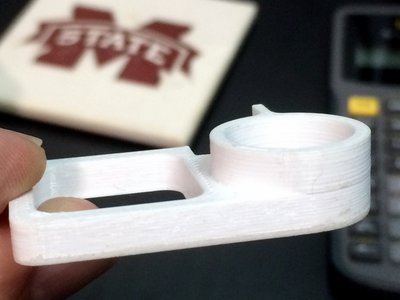 I have encountered this. I was doing a large order of printed houses for a local home builder and it was only on my older makergear so I let that one do the roofs and the REV E took over for the main floors and uppers.

I assumed it may have something to do with the belt slop that you get from running the stepper motor dampers, especially since the ones on my older M2 have a years worth of constant use on them, over the new machines dampers. I went ahead and removed all the dampers after the project was done and I havent seen any shifting since (I've only done a few print batches since).

Are you running stepper dampers?
Top

Also check the little set screw on the filament drive gear to make sure that is nice and tight....if that gets loose it might be shifting a little, affecting the feed. Make sure the teeth on the drive gear are not clogged. (The other thing that can happen is variations in the filament itself, white tends to be touchy - maybe a slightly higher printing temp would help.)
Top

might wanna confirm that your hot end doesnt have any wiggle to it, and that the bed isnt able to shift at all, meaning the print surface OR the heat plate.
Top

That reminds me of the "lines on side of print" section in the Simplify3D troubleshooting:

Kurz009 wrote:That reminds me of the "lines on side of print" section in the Simplify3D troubleshooting:

That is exactly what it looks like. The odd thing, however, is that the condition only occurs the faces perpendicular to the Y-axis. I think this points toward a Y-axis mechanical issue but everything seems to be in good order. Just getting back to troubleshooting this issue; been a while since I had an opportunity to print.
Top

A sizable slug of filament appears to have "backed up" the extrusion channel (zone above the hot end) and flowed into the gap between the extruder drive gear and the ID of the housing body forming something of a cam lobe on the drive gear. This condition would alter the squeeze on the filament as the lobe of material passed by the filament. It happened to work out somewhat coincidentally that the size of my test object was such that the condition appeared more prominent in face normal to the Y-axis. Removed the slug and all seems to be back to normal