Continuing prints after a black out

Continuing prints after a black out

I basically print from an SD card and w/o connection to the computer...And I don't have the LCD screen so far... therefore, I lose control of my prints after I lunch.
The reason I disconnect my computer is because 2-3 times it causes the print to stop (don't know the reason, just blocked)...so I never connected it again or printed directly from the computer.

But, if by any chance my printer stops (black out/my dog pulls the cord/any other), I have no way to continue the print from the point it stopped. Is it?

At this moment, what I'm doing to resolve this issue is:
- I take out the part/s from the building plate
- I measure the height of the last layer (let's say 15mm)
- I prepare a new print with the models sliced up to the part they were printed (all the rest above the 15mm)
- I print the 2nd half part/s
- I glue the parts together

This situation normally carries some mistakes and failures derived from the innacurate processes of manually measuring and gluing:
Some lines appears on the outside of the part or in the worst cases, the parts glue unaligned. To correct those mistakes a new manual process is needed: sanding.
Many times I get great parts (even better that the normal ones, because of the sanding) but with a lot of job. Some other times, I end up trashing both first and second printed parts...

As you can see, after a failure like that, a lot of manual processes are needed in order to don't lose many hours of print (of course I don't do any of that if the print is a simple/fast one).

Now my questions:
- Is it possible to continue a print launched from an SD after it accidentally stops?
- Is it possible to zero the Z axis with the parts still on the table? When I tried that, of course the parts ends up crushing the upper bridge of the machine...
- Maybe the Z axis can be "cheated" to be 0 at certain height (again let's say 15mm), but how can it be done?
- How do you avoid all these situations?

I listen to any suggestion in order to stop having these problems!

Many Many thanks!
Top

Honestly? I'd do just exactly what you are doing. There's no good way to save a print if the power fails, and the method you're using is probably the best one.

Really? Tweaking the Z0 wouldn't be something usefull?

I COULD continue prints (after a power fail) when they were not too high, by just starting at some height from advanced panel in S3D. That way the result is not awesome (again, contraction of the part over the bed if it's ABS, lack of accuracy when measuring the height the print stopped, etc.), but you can avoid the MAIN problem, that would be having a mistake while gluing two parts: I use a Loctite 410, which is great for gluing PLA, but the problem is the short time you have to align the parts together... one second, and that's it.

So, based on that possibility that exists for lower prints... I thought something similar might be possible to do with higher (and more time consuming) prints.
Top

Well, you could always try it and see if you can make it work. The problem is that if it happens and you don't catch it, you're going to have significant shrinkage from cooling on the bottom part, and things might not line up later when you try to resume the print. You'll also have to worry about making sure that the gap above the partially printed object is adjusted....because of shrinkage the gap is going to be larger than you expect, and you might not get good bonding of that first layer to the bottom part.

If you wanted to try to adjust for all of that you might be able to get it to work.......or you might wind up with a weak part that is going to crack and break down the road. I just don't know enough to tell you whether it could work or not.

You're right... doesn't seem to be a good solution, eventhough all the manual process described is a pain in the ***! But, maybe it's the best solution after all...

Another question related:
- What are the advantages of the LCD screen? I don't have it, but I'm planning to buy it along with the 2nd extruder update. Can I pause a print for a while and then relunch with no problem?

I opted not to go for the LCD screen, since I 'm sitting right here in the office when it runs, and I have a direct USB cable connection to it.

The LCD screen lets you start and stop the machine from right there at the machine. (But I'm not the best person to ask.)
Sorry!

I've saved lots of prints after running out of filament in the middle and saved one after a blackout (now on UPS).

1. Measure the height of the part where the print stopped.
2. place a shim on the Z-stop screw of the same height
3. shift the part down through the bed in S3D by the same amount
4. Slice and print.

If you measure accurately, the resumed print will be almost indistinguishable from a normal one. I'm attaching a picture of a resumed print, this one is not perfect (most are), but this one has the advantage of being on my desk and handy. 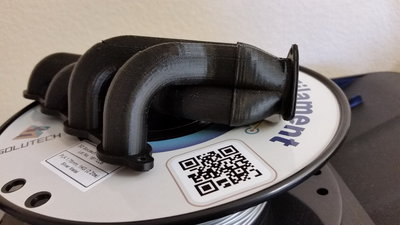 Thanks a lot Vandal! I'll try your method whenever Ihave a problem!
Best regards!!!
Top
Post Reply
8 posts • Page 1 of 1