this Y slipping has been going on for a while, unable to get a print out of it (in the middle of a run!)
Everything is clean, going to check the pulley and belt ASAP but I wanted to pick the collective brain.
Seen this in the Y direction?
I promise to update when I figure it out.

Image is of a test file that is known to print OK. (PETG) 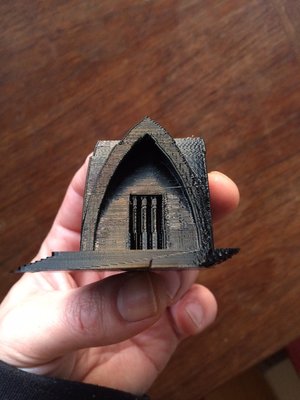 Is the base of that design supposed to look like that, with steps on the front and an overhang on the back, or was the slipping happening on the bottom too?

Just to make sure I understand what happened there......is that the right side of the print as it sat on the bed? (Y axis slip) Or was that facing you? (X axis slip?)
Top

Hi Jules!
Thanks for getting bak to me.
The base is supposed to be a rounded rectangle with vertical edges; I just printed off the SD card and it looks the same, however the steps are not 100% consistent. Every print I attempt has errors like this now.
Top

Sorry, also all the slipping is on the Y AXIS, seems to be toward the motor end of the bed; checked belts and pulleys and for debris, everything looks and feels great.
Top

I remember seeing Y-axis slipping described one other time on the thread below. Maybe there's something in there that can point you in the right direction:

(The only time I've seen something get out of step like that though, is when the PLA warps up and hits the nozzle - knocking it out of alignment. Doesn't look like that happened on your print though, so maybe that thread can help.)

If the belt and pulley look good, i wonder if the pinion gear hasn't gotten worn and is skipping. (Did you run your finger all along the inside of the belt and check the teeth on the belt? See if any are missing?)
Top

Thanks for the pointer as far as firmware, my worry there is that it was printing like a charm 2 weeks ago and started demonstrating Y shifts every now and then that got progressively worse- I guess re-flashing my shipping version couldn't hurt. I've been printing PETG with it from the start, since last June, running more or less as constantly as possible with one extruder changeout and all the readjustment that that usually involves. Prints have been perfect for the 3 months or so since the replacement of the nozzle. I'll sort out versions, pretty sure it's rev E.

Before I figured out some bed and environmental controls my pieces would warp but since I found some sweet spots temperaturewise they've been the best work the machine has put out, flat and very precise. The extruder never knocked layers out of alignment but would certainly rub and flatten previous layers as they rose when I was fighting the warping issues.

I checked the belt and the pinion gear, the setscrew is centered on the flat spot of spline and the set screw is tight. Gear itself was shiny clean, I ran tweezers down it do make sure no threads or gunk has accumulated ('natural' PETG threads are almost transparent) and didn't find anything; the belt teeth are square and the belt surface itself is free of loose fibers that may have worn out of it. Return spool is tight as well and I don't see any gunk under the spider.

I use simplify3d and check the tool paths before I run parts. I do run parts occasionally that have nonmanifold 'error' surfaces and trim out the offending layer it causes across windows occasionally, would anything like that corrupt the firmware? I am intimately familiar with the arduino hardware and IDE and don't see how that would happen.

When I get a moment I can check the fail bin for a rogue's gallery of Y step, or creep; almost certain all of them step back toward the motor end erraticly.
Top

And there's good clearance behind the bed right? (Not hitting anything or the cable getting bunched up and keeping it from moving freely all the way?) You picked the plate up off of the spider and examined the whole Y rail under the spider? The belt teeth are good all along the belt? (especially the part of the belt that contacts the teeth when the plate is pushed all the way back?) No threads anywhere in the belt either? (Flashlight helps).

It's not the firmware if you've been getting good prints - the only other thing I can think of is that it might be the pinion gear. You'll have to remove the belt to examine it.

Oh, before you check that, because you've got to get the tension right (not too tight) when you rebuild it, check to make sure the screws that hold the motor into the y rail aren't loose and letting the motor shift a little. It sits in a slot. It can shift along that slot if the screws are loose.
Top

Good clearance behind the bed, cable doesn't hit anything back there, and checked the belt under the spider where it goes into the block, teeth look good and regular all along, no threads.

Motor mount screws are tight, it's in the middle of the slots, and the belt tension is nice on both sides. I checked the electrical cable for any looseness and it's well seated.


I cut my teeth on very large inkjets that have alot of the same mechanisms so the failure modes are familiar in many ways, at least with motion control.
Last edited by dobart on Sun Feb 19, 2017 12:46 am, edited 1 time in total.
Top

Here's an early example, I thought someone was bumping into the bed! All shifts are on Y axis, supposed to be a flat vertical surface:

EDIT: I print with a brim, that first layer isn't a shift. 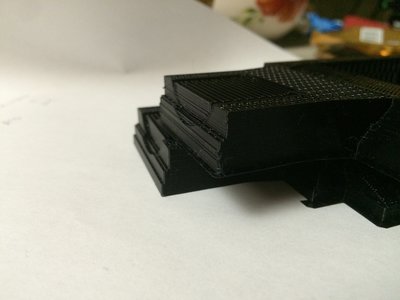 This cover plate should have a 45 degree angle; I've printed at least 6 of these with various other jobs no probem 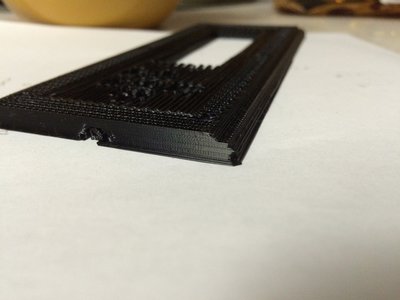