I have been having a repeated problem with the print becoming "offset" - usually after hours. This offset may happen in the X, Y or XY directions. It happens from the card, OctoPrint and the computer. I made sure all the belts and gears are tight. I slowed it down but it still happen. I have not had this problem previously. I have been in contact with MakerGear support but no fix yet. Any ideas? 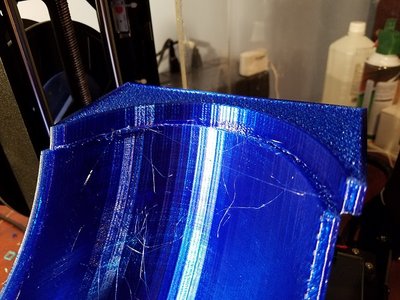 Almost certainly, those PETG hairs I see on the surface collect on the nozzle until a huge booger smears itself on the top layer. The next time the nozzle passes that area, it whacks into the booger, the steppers stall, and the remaining layers print with an offset.

That nice cyan PETG will hide the booger. If you bandsaw the part along the offset layer, you'll find a telltale blob hiding inside.

Solutions that don't work:
The problem with all of those "solutions": each distance / multiplier / infill setting costs you a day of printing and half a kilo of scrap PETG.

The real solution: That way, a failure on one part doesn't kill the whole thing.

A CNC guy looked at it and said "Static electricity Burp" - ground the printer.
Any thoughts?
I have thought about "Blobs", I try and keep it clean(ish). This is not an easy part to break into pieces. At first I suspected that problem but have started to think less of it as I have cleaned it while printing, but I don't watch it all the time. Also, another more vertical print failed and I would have thought it would knock it over. Perhaps I will see if I can get a movie to catch it.
Thanks!
Top

no on the static. its exactly what ed said it was without a doubt. print at a slightly lower temp so you produce less hairs and make sure your multiplier is right on the money because any overextrusion will collect on the nozzle then get deposited in the print down the road, cause a lump then some skipped steps when the nozzle whacks it.
Top

Didn't make any difference I could detect, but the Thing-O-Matic was a relentlessly unreliable plywood box, so it's kinda hard to say.

Anyhow, that's almost certainly not the problem with your M2, particularly given that you're printing with PETG and booger collisions explain all the symptoms.

Basically, the mean-time-to-failure for consumer-grade printers seems to be on the order of 10 hours (*), with the M2 on the high end of that range: something will go wrong twice a day. Windows will crash / disconnect, the SD card will fail with a spurious read error, the AC power will drop out for a few seconds, the filament will tangle, or, hey, it could be a static discharge. Point is, you will never be able to prevent all the problems and the likelihood of success goes down exponentially with operating time.


This is not an easy part to break into pieces

Redesigning it for success seems much easier than blowing two days on every failed iteration from now until you give up playing whack-a-mole with an endless succession of different problems, but I'll admit to a certain degree of fatalism.

Think of 3D printing as a production process, not a miracle. As with any CNC machine, you must design your parts with the machine's limitations in mind; you wouldn't expect a simple 3-axis milling machine to produce a complete engine block in one operation, right?

Some folks have successful tens-of-hours prints, but that's a losing gamble: it'll work once in a while, but not often enough to make the failures worthwhile.

Chop that thing up, bolt the parts back together, and get on with it…

"There is nothing worse than having your 8 hour dual colour print ruined while your computer decides that it has something more important to do"
viewtopic.php?f=10&t=5326
--
Ed
http://softsolder.com
Top

Well, got it printed. Through some combination of going slow, grounding the printer, removing blobs from the tip every few hours and luck - it made it. Going so slow it took about 50 HRS for the large print! So I guess we are better off than the 10 hr MTBF.

Previously a smaller print failed (in the same way) as well - twice. So I think it is something other than luck.
Thanks for the suggestions!
Top
Post Reply
6 posts • Page 1 of 1