jimc wrote:Crap i meant swap out my start and end gcodes with yours. But you prob knew that.

haha...well, it did make me stop and think, but yeah, I knew what you meant

I just started the clear PET print AGAIN, this time because Viki gave me a maxtemp error and stopped printing. I've had a few of those recently, as well mintemp errors even with the hot end at temp, so I have a feeling that Viki is getting spurious readings.
Top

I knew jimc would have a profile for the pigmented filament. He's beat MadeSolid PET+ to death.

As for the max temp error, you may have to grab a copy of the firmware and tweak the max temp a few degrees. It's a #define in configuration.h -- mine looks like this:

If that message is showing on the viki, it's the firmware that's detecting it. 275 is pretty darn high, if you're trying to control to 250. If that's overshoot on initial heatup, you should re-tune the PID gains for the hot end temperature control. See the procedure at http://reprap.org/wiki/PID_Tuning

Also note that resistance goes up with temperature, so I think if the thermistor goes open circuit (loose wire), the temperature reading will go top-scale and the maxtemp will kick in, so check your connections, too.

First try not so good. The first couple layers went down OK, but then it got progressively worse. Before I took the second photo, I bumped the temp up to 258, and it looked like it was starting to get smoothed out after a couple of layers. Then all hell broke loose so I stopped the print.

I'll try a few things. First, go to black instead of white, and see if that makes a difference. Then try 258 from the start. And maybe slow the speed from 4800 to 3000 to see if that helps. 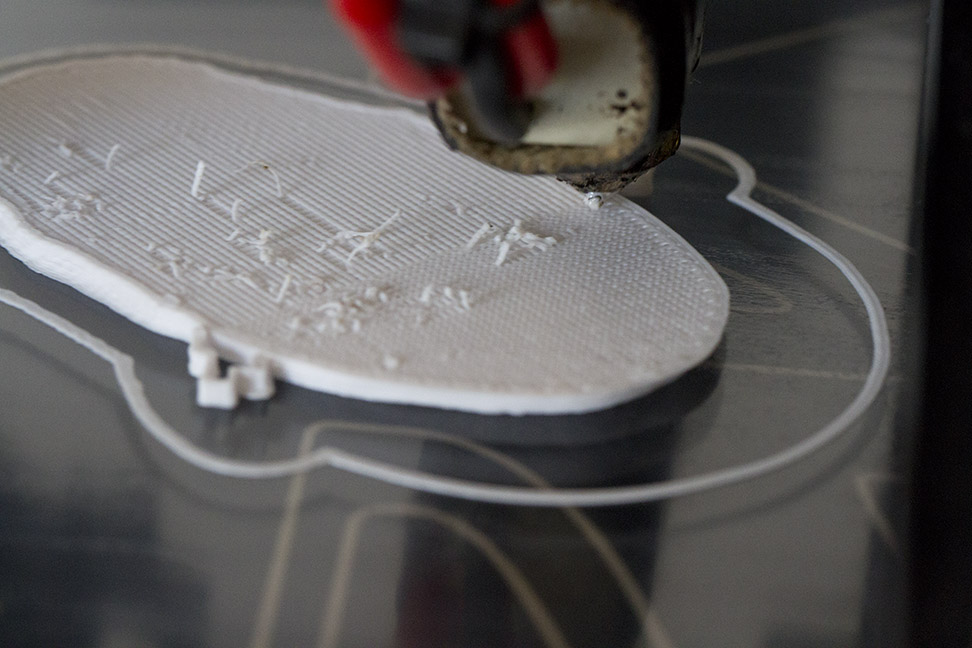 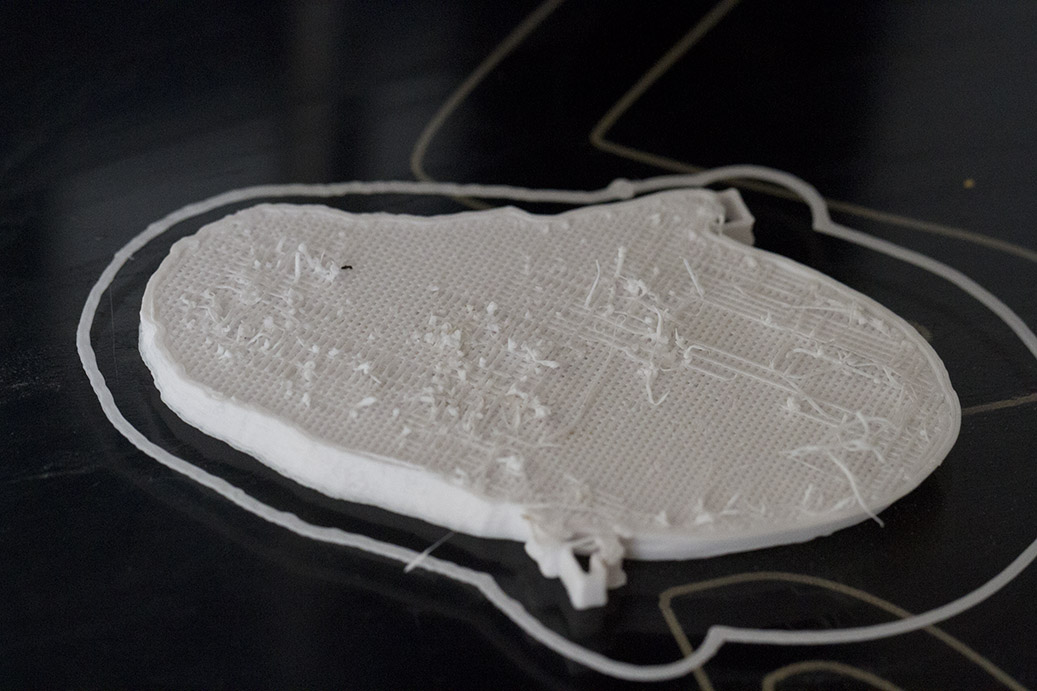 clean your hot end. the barrel and nozzle. progressively having to print hotter to make things work is usually a sign. i am of the firm belief that some plastics dont intermix well and doing alot of plastic switching will leave a thin layer in the barrel that doesnt fully come out then it cooks in there getting harder and harder. it builds up the more you change and make the hot end tight until you just have strnage extrusion conditions pretty much like your seeing. just unplug it and pull it out of the filament drive. unscrew the peek off the barrel. lock 2 6mm nuts together on the barrel so you can unscrew the nozzle then the block. soak the nozzle and barrel in a methylene chloride type paint stripper like zip-strip from home depot. soak it for a few hours. run a pipe cleaner through the barrel and blow everything out. reassemble.
Top

If you just run some extrusion of this material using the jog controls, with the bed all the way down, does it come out of the nozzle as a smooth liquid stream straight down, or does it curl up, get bubbly, or otherwise?

I see a few dark bits in the extrusion, so some of that gunk on the nozzle is coming off (or gunk in it is coming out...). See if you can get the nozzle squeaky clean and see if the extrusion out into empty air is any straighter/clearer.

I think it may be looping up on the nozzle, getting caught, building up and dragging, hence starting a mess that may or may not recover.

I and a couple other folks have purchased additional hot ends and use one for PLA, one for PET+ etc. I also grabbed a couple different hole-size nozzles to test. I tried a 0.5 mm with the PET+ -- and it REALLY runs and dribbles with that one! I tried an 0.25 nozzle and had a lot of trouble, but never really gave it a chance, because I had to swap out and print some PLA parts for a friend.

But start by just wiping it down (carefully) while it's hot until it shines --- and maybe run in some filament, back it out, cut it off, run in some more, back it out, etc., to see if something gunky comes out the topside. If you have a guitar, take a metal high E string and GENTLY push that through the nozzle to clear out gunk right behind the tip.

Let us know how the black does --- but while you've got the white out, it would be helpful to know if you can get more dark crud out...

Seems the consensus is...clean the crap off the hot end and clean out the extrusion path. I have printed PLA, nylon and PET+ in that same hot end for quite a while now [edit: and Ninjaflex...forgot about that one]. May not be a great idea. I'll give the cleaning a try, and if Home Depot is open today I will see if they have the methylene chloride to really do it right. I'm running out of options on what to tweak to get the colored PET+ to print, so hopefully a good cleaning will do it. Thanks guys...I'll let you know how that works.

Somewhat off-topic....I printed the extruder filament guide and bearing holder, and the extruder motor mount in clear PET+ (the motor mount has a small crack in the original part). I believe PET+ can stand up to the heat as well as ABS, but if you've got experience/info to the contrary, I'd be interested. As long as I'm going to take the hot end out, I'm thinking of swapping the ABS for the PET+
Top

The threaded rod and nozzle were a mess. I replaced the rod entirely, and cleaned out the nozzle. Still a problem. The first few layers looked great, then on the 4th or 5th layer, I noticed 5 or 6 consecutive rows were missing from the print. I looked at the nozzle, and the rows were there, in a big glob. I didn't see it happen, and didn't get a photo. But in any case, it still isn't printing correctly. The layers before and after the ones that ended up on the nozzle don't appear to be loose. They adhered to the layer below.

I've been trading emails with Josh on this, and described the following (taken directly from my email to him)...I've been getting maxtemp and mintemp errors showing up on the LCD interface. When I looked at one point, the temperature setpoint was 255 (which was the setting in the FFF) file, but the actual was 230 and dropping. The thermocouple was slightly (1-2mm) out of the hole, which may have caused that. It does slide out easily. I pushed it back in and a couple minutes later I got a maxtemp shutdown. The displayed temperature was 235 right after the shutdown. I don't know if the maxtemp shutdown is because the unit sees an actual temperature too high, or if it's because the unit is trying to boost the temp in it's control loop but can't, and goes above a maximum output and shuts down.

It doesn't seem right that the thermocouple should slide out so easily from the block, but it does. Has anyone tried putting thermal goop on the thermocouple to improve conductance and keep it firmly in the hole? I don't know if that is a factor in my problem, or a sideshow, but if the unit is not getting accurate temperature measurements, I'm sure that can't be a good thing and could affect how the plastic extrudes. I don't know why I'm getting both maxtemp and mintemp errors, but I do get both.
Top

oh man well you have other issues then. if the printer isnt holding a consistent temp then thats your problem right there. your mid print dropping to 230 then jumping back up again. there is no way your going to extrude evenly through a model. you gotta get that sorted.

I think when it read low with the thermocouple slipped out a little bit, the actual temp must have been high. Since the measured temp was low, the controller was probably trying to jack up the temp to compensate. Or maybe the readings were accurate, I don't know. Any way you look at it, those temp readings and thermal shutdowns are a problem. I think I'll look into getting a new thermocouple. Seems like some heat sink compound (whatever the technical name is) might be a good idea too.
Top

You're using the V3b extruder, I guess. I was using the earlier version with the ceramic core, and I put the temperature all the way up to 245 to get a decent print with the white PET+. Which would be 265 on the V3b, if you dare to go that high. For the record, I also had the bed temperature up higher than MadeSolid recommended (they said 60C, I put it at 70C). And for the large print I was doing, I got a lot of warping and pulling off the bed until I shut the fan down completely. Otherwise, the fan cools the base and it starts to contract and pulls off the bed. The problem with that, though, is that the lack of a fan messes with the ability to print over support, so I had to keep increasing the density of my support until it was at 100%. Even then, the interface layer between the support and the part looked very much like your photo, with loose filament strands everywhere.

Eventually, I got a decent enough print, pulled most of the loose filaments off the underside where the support was, and then put the whole piece through a methylene chloride vapor polish cycle, and it came out rather well, given the troubles I had printing it.

Check the PET+ thread on the MakerGear Google Group for a picture I posted of the mess I got when I had to leave the room for 30 minutes just as the print got to the top of the supports, then came back to find a fantastic birdsnest mess of filament goop all over the extruder, the printer, the desk, the floor, . . . Fortunately I managed to get it cleaned up with no permanent damage to anything, and it didn't even clog the extruder. Although my extruder has the fabric sleeve, which was so gunked up with plastic that I needed to replace it.

I have also noticed a strong tendency of the white PET+ to adhere to the extruder nozzle. I usually manage to keep it clean by wiping it down with alcohol on a Q-tip, while it's running hot. But give it time and it will be gunked up again. I feel like the nozzle could use a teflon coating or something. . .
Top
Post Reply
26 posts