Well, it may not be that simple... After a successful couple prints, the eSun filament stopped feeding a quarter of the way through another 6 hour job. The filament had a nice round chunk taken out of it where the drive gear had just spun for a half an hour or more. My immediate guess was that my extruder was clogged.

I removed the cleaning stuff, and shut things down. I removed the hot end, and took the nozzle off. The inside of the extruder is full of melted filament, but the nozzle looks like it's clear. I have a spare extruder, and I'll install that while I figure out what to do with the old one. I have to pack tomorrow for a trip, and probably won't get a chance to dig into it in detail or get the printer back up & running again until late next week.
Top

Gwhite wrote:The inside of the extruder is full of melted filament

The trick is to pull the cleaning filament out from the top, so it drags all the the crud out of the hot end. You must let it cool enough to be solid, but remain warm enough to be flexy: a "cold pull". You should extract a nearly perfect positive mold of the hot end's interior.

If you've been swapping filaments, the higher-temperature ones form layers inside the hot end. They don't melt at lower temperatures, so you can't flush 'em out, and the accumulation gradually restricts the bore.

Thanks! I had heard of "cold pull", but wasn't quite sure what was involved. I'll have to study up. Presumably you do this without the filament drive in the picture? Any idea what temperature I should shoot for when it's time to pull? I've mostly been doing PLA around 200C, but some of my earlier work was in PETG around 240-250. I'm guessing I can leave the nozzle off. It actually had a hole going through when I pulled the cleaning filament, but there was a "donut" of plastic around the opening, which I could easily remove with tweezers:

I didn't get a light under the first shot, but there is a clear hole going through. There's a small amount of baked on crud down inside that I'd like to get rid of before it flakes off & clogs the nozzle. 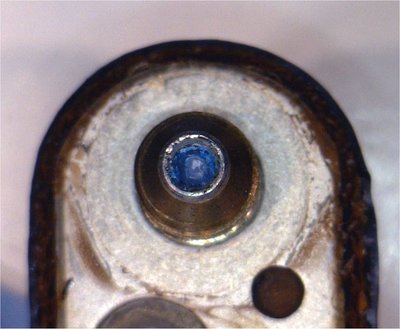 Despite hand feeding a good 6 or 8 inches of cleaning filament through the extruder, there's still plenty of the blue PLA+ I used last. No sign of the red I had all the initial trouble with.

As long as I have it off, I might as well clean up my nozzle. I've heard of people torching them to burn the stuff off. I also have some nasty paint stripper (methylene chloride based) that will attack almost anything. Any recommendations?
Top

Gwhite wrote:The inside of the extruder is full of melted filament, but the nozzle looks like it's clear.

Yeah you can get a clog in the just the barrel too. Try removing the nozzle and just run the cleaning filament through the barrel... it will come out in a big glob but it should clean everything out. I've even gone as far as to push the junk through with one of the allen wrenches.

A blow torch to the nozzle with burn just about anything out of it. I like to hold the nozzle with a pair of pliers hit it with the torch for a bit and I then hand feed a piece of cleaning filament into it... after it cools a bit I yank it out. (basically doing a cold pull on just the nozzle.)


Gwhite wrote:I had heard of "cold pull", but wasn't quite sure what was involved. I'll have to study up.

Gwhite wrote:still plenty of the blue PLA+ I used last

Which, in a parallel universe, would melt & slide right out at PETG temperatures. Alas, we don't live there, so ya gotta get primal on that sucker
--
Ed
http://softsolder.com
Top

Well, I installed a whole brand new hotend & nozzle, and re-leveled the bed. Fired up a print job, and it stopped feeding filament within the first couple layers. The filament drive shaft was turning, but the bearing wasn't spinning. I tried increasing the tension, and that helped a little, and then it messed up again (and again, and again...). I looked carefully at the outside of the extruder, and there was no sign of cracks or anything. I did notice that by the time I was done, the gap in the filament drive for the tension adjustment was down close to zero.

The only conclusion I could draw was that my extruder was dead somehow. I took it off the printed drive housing, and spotted something interesting: 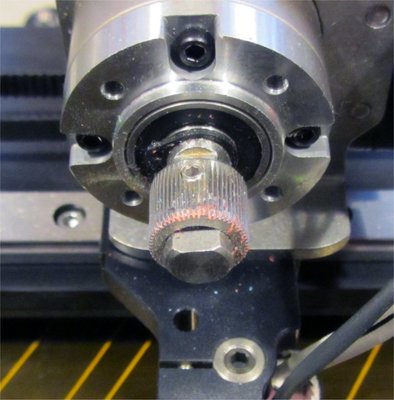 I moved the gear (which appeared to be quite secure, so I don't think it had slipped) forward on the shaft about 1 mm, which would put the filament about centered between the set screw and the front end of the gear. I should have taken a picture at that point, but I was impatient to see if this solved the problem. I backed way off on the tension screw and set it so it fed nicely and started a print job. Sure enough, two hours later, the print was just fine.

Here's what it looks like from the left side. You can see that the filament path is no where near the front edge of the gear now: 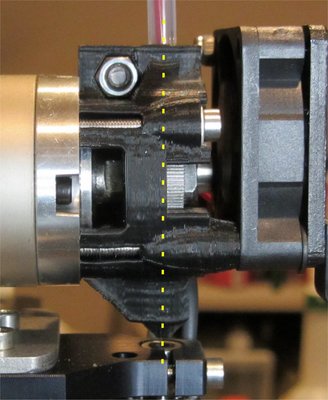 The printed drive piece didn't appear to be too badly worn, but I am going to replace it with a two-screw design to avoid this in the future. With the gear shifted forward, it's unlikely to recur, but the one-screw design is still going to have a tendency to twist the bearing & push the filament forward. I think the problem was initiated by the combination of the offset gear position and too much tension flexing things.
Top

Well, that helped, but about a half dozen small prints later, and it appears to be slipping again. After getting some ratty areas in a few prints, I increased the tension a bit, and that would help for a while, and then it would skip again. Now it will start a print, and after about 15 minutes, nothing comes out of the extruder. I caught it air-printing late last night & didn't have time to de-bug any further than verifying that:

A: the filament drive motor shaft was turning

B: The bearing wasn't spinning

C: There were no "clicking" noises indicating the stepper was jammed

D: If I pushed on the filament, I could get it to feed again

E: I marked the tension screw, and at least over the course of 5 or 10 minutes, it didn't appear to be slipping.

I didn't think to look in the left side to check if the drive gear was spinning until after I had restarted the filament by pushing, so it's possible the gear box has problems. When I did think to look, I could see nice teeth marks on the filament in the gap between the drive & the extruder: 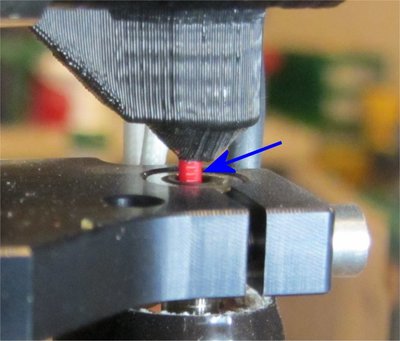 This is with a brand new spool of eSun PLA+. I tried hand feeding from the spool, and it felt like it took a fair amount of force to get the filament off, so it's possible the spool is mis-wound & jamming. However, this is the third spool that has exhibited the skipping problem in the last week or so of printing. The last job that went well was on a nearly exhausted spool, so it's possible the added weight of a full spool is part of the problem. 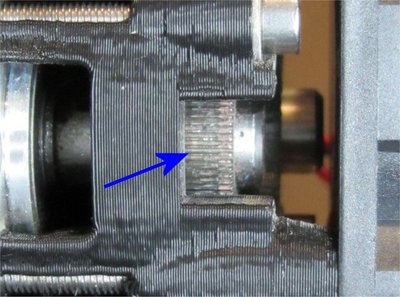 I tried to clean off the worst of the red dust from the end of the gear when it was too far back, but I don't know if the dust down in the teeth on the end are left over from that, or new. Also, the gear doesn't look especially sharp.

I've had this machine for about 8 months now, and have run about 5 spools through it, so I don't think I'm a particularly heavy user. I've got a new drive housing on order, and a new gear.

I'm baffled. Do the teeth marks in the filament look adequate? Maybe I just need more tension. I'm going to try another print today, when I can babysit the machine and hand feed it off the spool to see if that might be the issue. It's possible the jams are now being caused by the filament spool, and the apparent duplication of my earlier problems is just a coincidence, but it makes me very suspicious that something else is at work here...
Top

Those teeth marks look pretty thin to me. I think your tension screw needs to be tightened.
Top

That was my suspicion. I figured the feed failure was the results of some combination of three things: 1) too much drag from the spool, 2) too little traction in the drive, and/or 3) too much resistance going through the extruder. I did several things:

1) I tightened up the drive tension 1/4 turn

2) I noticed the spool didn't slide very freely on the arm. eSun uses a solid cylinder surface inside their spools, instead of the hollow 2-rim design that some spools have, so there's plenty of surface area for drag. I put a layer of UHMW anti-friction tape on top of the arm so the spool could slide more easily. I certainly feels like it spins much more freely now.

3) I carefully monitored the first print, relaxing the spool tension periodically to try to get past any bound up filament on the spool

4) I cranked the extruder up to the maximum recommended temperature (225C) to make it easier to squirt the stuff out.

That seems to have done the trick. I've manged to get four ~ 1 hour prints through it without a problem. None of the tweaks were that drastic, but they seem to have got it up & running for the time being.

Now I can go back to shopping for polycarbonate filament to make an improved drive module. I'm going to start with sthone's hinged dual screw design (viewtopic.php?f=10&t=3283), and make a few tweaks to it.
Top

While looking at sthone's drive design, I also ran across this one:

It's meant to work with the standard fan configuration, which I would like to keep. What it's missing is the springs that stone used, but I can fix that easy enough. I'm thinking that using a shart stack of Belleville spring washers would give me a compact design, and allow easily tuning the spring force.
Top
Post Reply
25 posts