The usual tolerance is +/- 0.05, so 1.75 mm will be Close Enough. If the objects start looking under- or over-stuffed, check the filament diameter first to make sure it's not running consistently thin or thick.


drop the nozzle onto the feeler gauge and tighten

Then print and measure a thinwall box in the middle of the platform to ensure the nozzle didn't have a teeny bit of cold plastic holding it slightly high. It's quick, it's easy, it prevents heartache & confusion.

Yup! Tweak one thing at a time, using the simplest possible object. Verifying a change in a few minutes with a consistent test object beats headbanging after an hours-long print goes pear-shaped due to a bad setting.

I am sure your getting tired of my newbie questions but like a leach I will try and suck every bit of info from anyone who will respond!

Attached are my 2 solid prints one is 26x26x2 and the other is 10x10x2
I have to admit the infill has no holes, but does have largish bumps at the end/beginning of the extrude (not sure which)

So is there room for improvement, tad tall around the edge 2.05-06 with the bumps.. micrometer tight on edge and not touching in center..
Not sure what to adjust.. or if it even needs adjustmemt.. 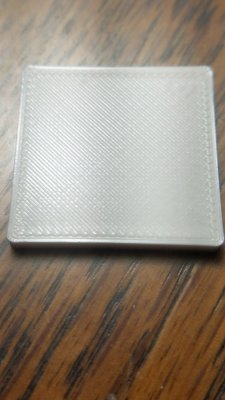 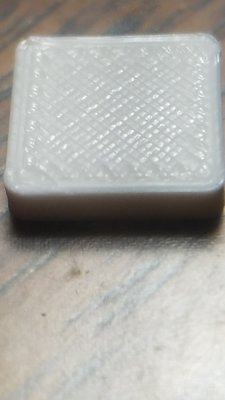 
suck every bit of info from anyone who will respond

If you have not already done so, work your way through the newbie guides / hints / tips:

There's a lot to learn, but the truth is out there ... and close at hand, too.
--
Ed
http://softsolder.com
Top

ednisley wrote:
There's a lot to learn, but the truth is out there ... and close at hand, too.

Exactly.. but weeding out the truth from the internet.. can be hit of miss!
Will do as you suggest, and no, I hit the first part of that info but have not done the rest.
This is no different than learning my first programming language (well not quite as complicated and abstract), learning to Airbrush or to a small extent, Metal Detect. I am having those same feelings which drive me and the wife nuts.. "I need to know everything NOW" Don't want to wait, need input now!

airscapes wrote:<snip>
BTW, with the v4 hot end, not sure if older ones are different, you can just go to starting height loosen the lock screw and drop the nozzle onto the feeler gauge and tighten.. that is how I set this height this morning. This is assuming the hot end was not pushed up against the bracket and you have a little room to play.

Why didn't I think of that!? I just replaced my hotend, and was planning on doing a full leveling operation anyway, but that would be a big time saver in the future.

Question: Is there a simple G-code command to set the bed to the correct height for the test shim, or do I need to calculate the shim thickness (I think it's 0.005" = 0.127 mm) & send it to that altitude?

well, I guess it depends on how far up into the bracket you had the hot end when the starting height was first set. If it was just flush with the top of the boss you have room to push it up farther so it doesn't run into the glass. I pushed the HE all the way up and snugged the set screw
Then send the following gcode (this assume nozzle has NO plastic sticking out of it at all) this will put you at the starting height and you can just loosen the set screw and drop the hot end onto the blue feeler gauge. I did not put the zip tie on the wires of the hot end until after I did this.
G28
G1 F1000 X100 Y125 Z0

When done I entered the above code again and rechecked.
Next I ran M503 to display the Z offset and wrote that down.
Next print a thin walled calibration square and make sure the printed part is the proper size with no distortion of the bottom layers.. I had to adjust my height up .03 to clear up most of the elephant foot
To do that I will past in the data Tech Support emailed me.

How to alter your Z-offset with the M2 Rev. E:
You can fine tune the bed height without the QuickStart App. It involves sending gcode commands to your printer which can be done in the QuickStart App, PronterFace, or the Machine Control Panel in Simplify3D.

1. Reset your printer so that you are only saving the changed Z-offset to your Rambo board. Navigate to whatever communication platform you choose. And connect to your printer.

2. It may start updating with temperatures every few seconds. It is best to shut this off. (For example, in the Machine Control Panel of S3D press the “Verbose” radio button.)

3. Next, send a “M503” command. This will display your printers settings stored in EEPROM.

4. Look for an M206 in the communication window, these are your offsets for every axis. Then find what value is set for Z. It should be something around 10 to 14 (the unit is millimeters).

8. The new offset will only be used after you home the Z-axis. this can be accomplished by printing something (most gcode has a homing command at the beginning) or manually sending a “G28 Z”.

You should be very careful when bringing the bed closer to the nozzle. If it goes to far you could damage your hotend or break the glass.

Ideally, while the bed is level and your bed and extruder are at operating temperature, your nozzle should just touch the bed when the z-axis is at zero. You can send a “G1 Z0” to your printer to move the bed to the 0 position on the Z-axis.
Top

Ed if you are still around I am about out of ideas.. must be barking up the wrong tree.
When I print my solid square 100% infill I get the bumps along the edges (nothing new been getting them since day one) where the infill meets the perimeter. There is one side that is the worst (highest) then one next to it is a bit better that the other 2 are good or very close to it. I have changed to .02 layer height and printed a solid .4 wide square (single layer) and height and thickness are good.

I have slowly one at a time adjusted the retraction distance up to the current 1.80, Extra Start distance -2.0, and retraction speed (set the other day for stringing) 4800. I also changed infill outline overlap from 15% down to 10% with little change.. What am i missing??? 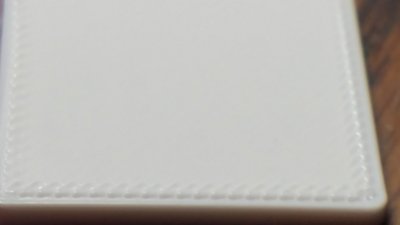 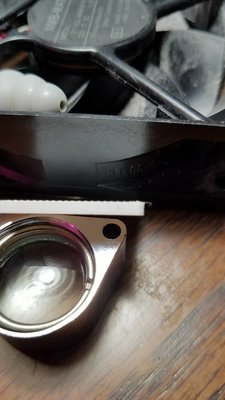 airscapes: Thanks for the info!

Maybe it's small enough not to matter, or it's intentional, but if you adjust your extruder/nozzle to just touch the shim using:

You end up with a Z position offset upward by the shim thickness (0.127 mm), which is about half the thickness of a typical layer. I would have expected you would want to use:

Am I missing something?
Top

Maybe it's small enough not to matter, or it's intentional, but if you adjust your extruder/nozzle to just touch the shim using:

You end up with a Z position offset upward by the shim thickness (0.127 mm), which is about half the thickness of a typical layer. I would have expected you would want to use:

Am I missing something?

Could be I am wrong.. just a newbie here..
I asked tech support how to move the extruder to the staring height without using the quick start app so I can check it with the feeler gauge and that was gcode I was given.
When I remove the hot end I thought .. why not just move the thing to the starting height and drop the nozzle on the shim. After all isn't that what the starting height should be?
Again, real new to this so someone else will need to confirm either way. I did make an adjustment to the z offset lowing the bed by .03 when printing the boxes to get the height of the box correct and stop the bottom layer from kicking out..
Top

Nothing: you're becoming a careful observer, which is all good!

If that's really 0.02 mm, then they layers are way too thin for anything other than bragging contests.

If it's 0.02 inch = 0.5 mm, then it's way too thick. Metric units are the default in 3D printing, so always specify inches if you insist on 'Murrican units.

If you're slipped a decimal point and it's really 0.20 mm, that's fine.


bumps along the edges

Remember what's going on: the extruder must exactly fill a sharp angle with a gooey blob of plastic squeezed out of a round hole. Getting a flat surface requires tuning:
You've already measured & set the diameter & EM, so set the slicer to produce the infill first.

The Retraction distances (1.8 / - 2.0) seem excessive; return those to the defaults. Simple squares don't have much retraction, so they're not good test pieces.

Run off several solid squares with the Infill Overlap set to 0, 5, 10, and 15%, examine their differences, then pick the one you like best.
--
Ed
http://softsolder.com
Top
Post Reply
25 posts