I have an M2E that is about 3 1/2 years old. It's a home hobby machine, so it hasn't been hammered on too hard.

I just ran a test print for a friend, and I'm seeing repeating patterns on the surface of the print in both X & Y that I don't recall seeing in the past, or at least no where near as pronounced. There is definitely a little ringing when the extruder goes around a corner, but the pattern I'm concerned about continues pretty much across the whole face of the model, which is 60 mm wide.

Here's the best picture I could get, going in the X direction: 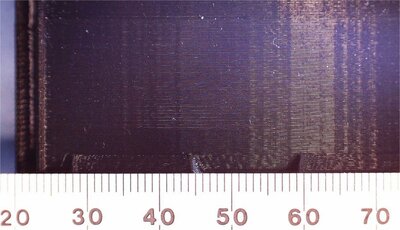 The period of the waves is about 2 mm. I also get them in the Y direction, but they are less pronounced, and the period is about 1 mm:

There is definitely a speed effect going on. The top half of this feature is small enough that the slicer slows the printer down, and the quality improves dramatically.

I'm guessing that I might be hitting resonances in the printer, but unless some of the screws have worked loose, those shouldn't have changed over time.

The only thing I could think of that might have changed is that my belt tension might be off due to stretching. I plucked the Y-axis, and the belt went "boing". The X-axis went "thud". I've tightened up the X-axis so it also now goes "boing", and even at a slightly higher pitch than the Y-axis.

I'm going to run a test print and see if the pattern has changed, but I was wondering if anyone else has run into this & what other things can I play with. Should I grab my hex keys and try to tighten up all ~ 100 screws holding this thing together, or are there particular areas that are worth focusing on first?

Thanks for any comments and/or suggestions.
Top

could be the model was exported with too much detail, also check your M503 output .. jerk could have gotten accidently hosed, I know I had a similar issues when I had a fat finger entry..
Top

The print with the tightened X-axis belt is better, but only after several centimeters, so I think the problem is best described as "prolonged ringing".

Here are the speed, acceleration & jerk results from an M503 query:

I don't have a copy from when I first got the machine, but they are identical to the settings I had before I started messing with PrusaSlicer several weeks ago. I dug around, and found a posting from airscapes from a 2019 vintage M2E, and there are slight differences, but not in a place that would affect the XY operation:

The stuff in blue is from my older machine. The factory apparently slowed down the acceleration of the extruder, and increased the Z axis jerk by 10%

I dug around for a print from a few years ago, and upon close inspection, it looks like I had the same thing going on, but I didn't notice it or didn't care on that print. I typically run a bit slower than the defaults, and a lot of my prints are small & without long vertical sections where I might have noticed it before.

Now that the X-axis belt is tightened, the waves I'm seeing are probably "normal". I'm getting less patient with long prints, so the next question is:

Can I get a significant improvement in print quality without major speed sacrifices by tuning things like acceleration & jerk? I'll go dig around on how to do that.

Take a look at the infill pattern: those lines likely mark where the infill meets the perimeter, perhaps affected by perimeter speed.

You may get different (not necessarily better) results by laying infill before perimeter or the other way around.

There's a setting for the area below which the slicers produce solid infill, so smaller sections tend to look better.

I've read all manner of bizarre explanations, but infill vs. perimeter seems to explain most of it.
--
Ed
http://softsolder.com
Top

Thanks for the comments!

I thought about the infil initially. I'm using 3 perimeters, and that's usually enough to kill a lot of "ghostling" from the infil. The print is mostly hollow, although the wall are thick enough that there's a tiny strip of infil in them.

However, if you look at the results after I tightened the X-axis belt, the ripples are pretty much gone on the right hand side after things have had several centimeters to settle down. That face of the print is aligned with the X-axis, so the ringing (if that's what it is) is actually in the Y-direction.

I've been reading up on acceleration & jerk tuning, but haven't had a chance to play with it. One thing that is odd about the defaults is that the Y acceleration (1000) is different from X (900). I'm guessing the difference is because Y has to move the entire build platform, and X only has to move the extruder. However, I would have thought you might want to try accelerating all that extra mass more slowly. Maybe they increased the setting to kick it a little harder to get the mass moving...
Top

Here's the thing: you can see differences you can't measure. At that scale, anything you change will produce a visible difference, but without actually doing anything. Remember, it all comes down to gooey plastic squished into place against not-so-gooey plastic; anything will change the results.

For example, those ripples seem to be in the same places with the same spacing after you tightened the belt, albeit with a slight change in visibility. If tightening the belt made any mechanical difference, it would definitely change the resonant frequency and, thus, the ripple spacing. It didn't, so the "problem" isn't the belt tension.

Preview the G-Code and see if the infill has vertical rows touching the perimeters behind those ripples. If so, that's the "problem". To verify, change to a different infill pattern (I like 3D Honeycomb) and you'll get a different pattern.


increased the setting to kick it a little harder

Increasing the acceleration / jerk requires more torque, which means a higher likelihood of stalling, so that's the wrong way to go. I expect whoever set the values stopped adjusting them when "it worked" and never thought about it again; I've certainly been guilty of doing exactly that. [grin]
--
Ed
http://softsolder.com
Top
Post Reply
6 posts • Page 1 of 1