I used to have excellent bridging performance on my printer, but recently it's really gone down hill.

I realize this is a relatively large distance, but I used to get considerably better results. 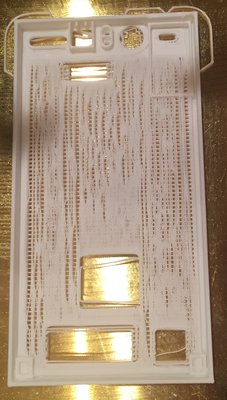 This is using Makergear PLA at 220 C. I've used various bridging settings ranging from the defaults to increasing the extrusion multiplier (up to 140 %) and changing the bridging speed up to 125%. I'm also using a MIC6 tooling plate and dampers which I suppose could result in increased vibration. That said, parts that don't require bridging have been printing perfectly.
Top

I know people have differing bridging theories, but what I found worked for me after several tests is to decrease the extrusion multiplier slightly, to keep the bridge taut (80-90%), and drastically decrease bridging speed, 25% or so. There is no reason bridging needs to be fast, it will happen, and the slow bridge will allow it time to cool more and reduce sag. Also, see if you can convince it to bridge in the shorter direction.
Top

Bridging over such a large area is never going to give good results; you just can't get a good surface printing over an air gap. It's worth asking whether the side of that piece that's against the bed can be flat. Or whether it can be printed in two pieces and glued together. I try not to rely on bridging unless the part that's being bridged is somewhere out of sight, like inside a bolt hole.
Top

I can't help but think something odd is going on with my printer. There is support beneath that area and I've had success printing similar objects in the past. I've also had the wavey filament issue a few posts down so I've started to wonder if I have some sort of issue like belt tension not being quite right, extrusion multiplier being out of whack or something like that.

I'll try jsc's advice of slowing down bridging a lot and seeing if that helps and report back.
Top

tofu702 wrote:I can't help but think something odd is going on with my printer.

Another thing to check is your filament diameter and make sure it hasn't deviated too much from when you initially installed it an dialed it in.

I've had to modify my extrusion multiplier mid-spool on at least one occasion.
Top

The other question is: Is this a different filament from the last time you printed bridges? For instance, PETg is really bad at bridging. PLA is usually good, but it is very likely to vary a lot by brand, and possibly by color. Having support underneath helps prevent sagging, but the filament has to be really good at sticking to itself. You may need to reduce the gap between the part and the support to zero, or close to it, which can solve the bridging problem at the expense of having to sand off bits of the support still clinging to the part afterward.
Top
Post Reply
6 posts • Page 1 of 1

Return to “Getting Started”