A Good All Around 3D Scanner

Have questions or comments about Simplify3D, Slic3r, Cura, Reptier, etc? Or wondering about which CAD software to use...discuss it here...
Post Reply
29 posts

some website wrote: With a small but sturdy unit designed to minimize costs, a powerful software package that is intuitive but accurate and a range of custom-tailored applications, the LMI Technologies HDI 120 rounds out our list of iReviews 2015 best 3D scanners under $50,000.


Insta lmao!! Yea twitch how they worded that they make it sound like ur going to call them up and it will be $49,999 lol but I did get a chance to see a few scanners that have price tags well over 100k and I must say for 10k this one does a dang good job and the software is also user friendly and well it's fast and yea it's fast

no 30 min scans for a 2" tall shroom, that would be more like a 15 second scan and another 10-20 seconds of it rendering in the software (that part has a lot to do with your CPU and RAM) with my MacBook Pro which has the Intel i7 750GB PCIe SSD and 16GB of DDR3 1600 it goes real quick but on my wife's older MacBook i5 it takes about double the time and with my NAS server that's just crazy with 4 CPU's 128GBs of DDR3 2450 and 50Tb mirrored and dedup running Linux Mintit well screams right along but not portable at all :/

We should all get together and make a 3D scanner that matches or surpasses the HDI.

lets do it lol

I have a Nextengine that I purchased some years ago for a special project. I needed to measure the distortion of a piece of machinery during operation. You couldn't be in the room with it while running. I did a scan when it wasn't under load and one when it was. It produces stl files. Rhino has a function to convert stl to nubs models. So I compared the models... it worked out ok.

Now, it mainly collects dust. I mainly print functional devices that I design. Not many organic shapes. From what scanning I've done, I agree that surface prep is critical and a pain. One of the things with the Nextengine is that you buy the unit and it comes with the scanning software. If you want to get the speed and resolution the scanner is capable of, you have to spend another $1000 and buy another software package. I am probably wrong, but that philosophy kind of rubs me wrong and I didn't go for it.

It's basically a dust collector for me...
Top

I've had my SLS-2 for a bit now. It's definitely an art, fairly tedious, a little cumbersome, and a lot of it boils down to what you want to (and can) do with the STL/OBJ output. And of course the whole surface prep thing, is very much a thing..
2012 M2 V4-PTFE
Top

Rara wrote:I've had my SLS-2 for a bit now. It's definitely an art, fairly tedious, a little cumbersome, and a lot of it boils down to what you want to (and can) do with the STL/OBJ output. And of course the whole surface prep thing, is very much a thing..


It sure is something that takes time to play with to know how well it will work.. I know that the higher dollar scanners are much faster and not as sensitive to the surfaces its scanning but it still needs some prep if its a high gloss finish. As for the files I use a few CAD programs, I have BobCad-Cam v26 & v27, I also use Solidworks which works very well for pretty much anything but you have to have a Cam if you want to send G-code to a CNC. BodCad is rather cheap for what you get and is able to do a bunch of cool things with many file types but its default file finder needs changed to see other files.
Top

Yeah, I am still trying to figure out what exactly I need as far as software goes, it's a far more complicated question than I had initially thought. I may actually be able to get away with Blender/Meshmixer and MOI or something for my needs; but that would be entirely too affordable..

I'm very happy with my David SLS-2. Hard to beat for price, quality and performance. Once you get things figured out it's really not hard to use and you get excellent results. I looked at the NextEngine, they say $3k but that's not even close when you add in software and the other goodies you'd need.

It's not the factory SLS-2, I actually specked out my own system. I bought the David 4 software, their calibration panels, purchased the same projector they use K132, bought my own industrial CCD camera ( pretty much the same one they use), used a v-slot linear rail and 3D printed my own adjustable projector and camera mounts. I also bought a new Windows laptop just for the scanner. All in for $2100.00 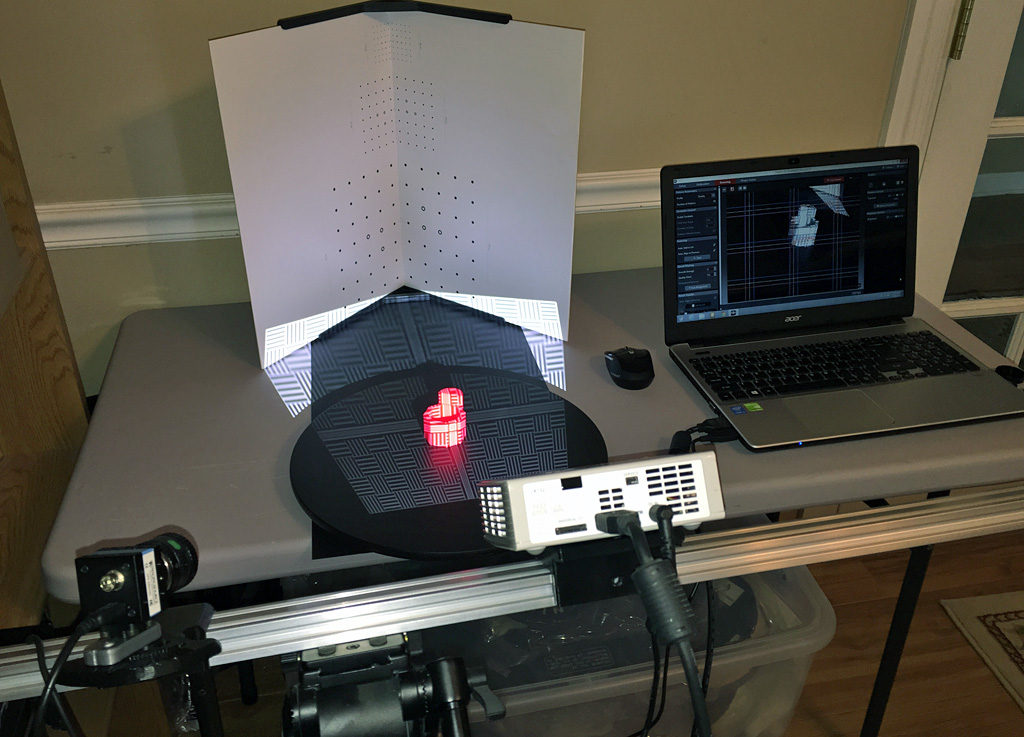 Yeah, I unfortunately decided to just get the kit. A review-unboxing thing said everything was extremely high quality, 'totally' worth the money, etc etc...uhhhhh yeah, no, it's not. Some of the details are pretty cheesy, a cut corner or two, a couple head scratching details; if I weren't going to be hit with a 20% restocking fee that would negate any savings, I would have sent it back to piece one together myself. NextEngine was on the list of scanners I was thinking about; does it not come with any software at the base price level? I've had a few moments where I wondered if maybe that was the road I should have gone down, but other than having spent $X00 more than I really needed to I've been generally happy with my initial results.

Have you had luck joining the DavidScan forums though? I signed up probably over a month ago and have yet to be approved..
2012 M2 V4-PTFE
Top

Send David an email and or post on their FB page. Took me a couple tries to get my membership validated. I almost ordered the full SLS-2 and that's what I really wanted to do but given I also needed a laptop it drove it over my budget so I decided to go the DIY route and come as close to the SLS-2 box set as I could which actually worked out pretty nice.

The one disadvantage I can see is David has done some kind of mod to the K132 so it will focus closer than a stock K132. Not a huge deal unless you want to scan really small items such as coins. You can open up the K132 and remove an end stop screw that will allow you to get very close to the focus range of their K132.

The NextEngine does come with software but if you want the high-res version it cost's another grand. The turn table yet another grand. Honestly I think structured light is the way to go... at least for me.
Top

Yeah it's either just a short throw lense, or maybe they just knock out that limiter, though the focus lever does have a DavidScan logo on it. I don't think the lenses are expensive (under $50 if I am not mistaken), if it's the same sort of deal that people are using with their DLP resin printers. I think I've even seen guys DIY it with a simple spacer made out of PVC pipe; I think there are two lenses and spacing them farther apart effectively shortens the throw, not unlike a zoom lense on a DSLR. Where there's a will...

All that said, I will admit it was nice to be able to open the box, plug it in and get to work. $500-$1000 worth of nice...well, not sure about that, maybe if I had customers waiting, but I am stuck with it now.