by Toby
lol, well, yeah, i mean, if you're going to go and get all practical on us.

Great idea on the cylinder, its basically the same as having a coordinate display, or close enough to help hide those pesky seams when you want.

by Toby
Just for kicks and following Jin's suggestion I modeled the M2 logo on the bed as flat polygons and used the feature in S3D that allows you to include a model on startup. It's in Tools->Options->Machine of all places. I also put in rectangles for my binder clips. You can color the model however you want. Here's what I ended up with: 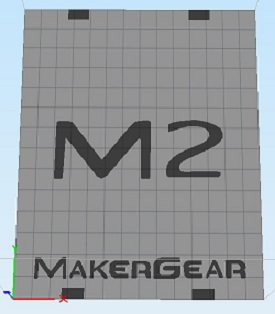 Here's what it looks like with a model on the bed: 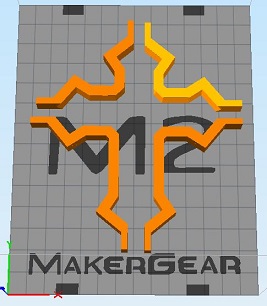 The logo doesn't interfere with slicing in any way that I've seen.

To check registration I also modeled the logo in a printable form and printed it out. Here's a pic of that. It's not 100% spot on, but pretty close. 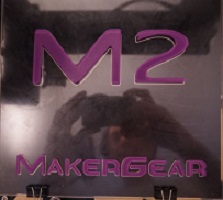 Attached are the two .stl files: M2Logo.stl for adding into S3D as a background model, and M2LogoPrint.stl in case anyone wants to print it out.

by jsc
Cool, thanks Toby. This will come in handy when I want to glue stick my bed and want to know approximately how far the model extends.

How did you do this, by the way? Did you track down the moon man font the text is in, or what?

by Toby
This was done in "TobyCad"

. It's a javascript app for modeling I've been writing just to have some way to model without having to deal with a big package or the limitations of toy cad programs.

It's pretty basic but I keep adding to it whenever I want to do something new. In this case I figured it would be useful to be able to load a picture in the background and trace outlines from it. So that's how I got the logo into the program with the registration more or less accurate. After that it's just extrusions.

It was also a good test for this laptop I just got- a thinkpad yoga 2-in-1. The great thing about it is it has a touch screen that is also a wacom digitizer, so I can draw accurately directly on the screen.

by SandiaScalpel
All this creative work-arounding is excellent, but it really makes a whole lot of sense to ask S3D designers to just modify their program so that the grid that displays on the print platform is in 1 cm increments when metric and 1/2 inches when working in English units. That shouldn't be that hard to do! I love this software, but from the first day I have used it I had thought the gridlines on the build platform should be more than just arbitrary.

by Toby
That's a good idea. I'll post that over on the S3D board when I get a chance. Even ask for a little more: How about a user settable value for the grid spacing. Sometimes I don't want the grid there at all, or just a 4x5 division of the bed would be useful.

by jimc
i hear ya on the grid. it should be 1cm squares. i have been using the drop pin method more and more and it really works great. i made a cyl 1mm dia and 1cm tall and just drag it where i want my seam, double click on it and plug in those coords to my process. quick, easy and accurate.
All times are UTC+01:00
Page 2 of 2
Powered by phpBB® Forum Software © phpBB Limited
https://www.phpbb.com/