Greetings All,
Mostly a lurker here, but I did want to make sure to alert everyone to two upcoming events.

We The Rosies for NomCom - Parts Due By May 20th
We The Builders is collaborating with Adam Savage to make a 6 foot tall Rosie the Riveter statue for the very first Nation of Makers Conference in Santa Fe in early June. The piece will be made out of 2625 3D Printed parts (in a variety of skin tone colored filaments). They are hoping to have all the parts printed by May 20th. As you may expect with that tight timeline, that are looking for as many contributors they can get. If you don't have any filament that would qualify as skin tone, I have seen on Twitter people printing in white and then painting it.

You can find out more about this community build and claim a part to print at:
http://www.wethebuilders.com

East Coast Rep Rap Festival - June 23rd and 24th
And there is another inaugural event happening in June! The very first ERRF will be at the APGFCU Arena in Bel Air, MD (North of Baltimore). I am going to be assisting with logistics with the event, so I fear I won't be able to show off my MakerGear printers as much as they deserve. If anyone has any printing projects they would like to share at the event-- a [non-commercial] exhibitor booth is $10. Oh! Also they are going to be doing a 3D Printed Derby race overseen by Boy Scouts.

More on that, a link to buy tickets, 3D Printed Derby rules, and a downloadable flyer to help spread the word is at
http://www.eastcoastreprapfestival.com

Thanks All! Have a great night!
Vicky
Top

You're welcome! I may slink back to my lurking now.

Before I do-- I guess I should throw in that I very much appreciate MakerGear and how it has empowered me to make the things I want to make. TL;DR - Thank you for your printers.

Just a reminder that this event (East Coast Rep Rap Festival) is tomorrow, for anyone in the general area of northeastern Maryland, which includes pretty much everything in the I-95 corridor from Washington D.C. up to Philadelphia.

I will be there showing off my custom "twin extruder" M2 and a bunch of prints including my fairly popular OpenSCAD chess set and chessboard. I guess Vicky and I will be unofficially representing MakerGear at the event (we'll do you proud, Rick!). I'll wear my MakerGear T-shirt, of course.

the site says Saturday and Sunday.. you going to be there both days? Is sunday worth while or do most folks just do one day and sunday is kind of let overs..
Top

Event was very cool! Met Tim and Vicky and saw a lot of interesting things. I think the "E-nable" booth intrigued me the most as it is something I can do with my printer that actually matters. http://enablingthefuture.org/ 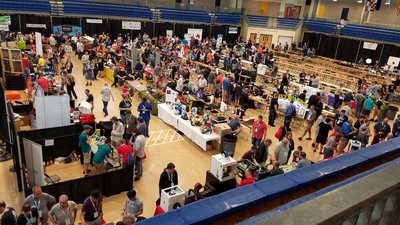 Indeed, we had a great time at ERRF.

Best use of the M2 at the show: Mosaic Manufacturing of Toronto came and showed off their Palette, which combines four incoming spools of filament by cutting and splicing them, done several feet away from the printer but synchronized to the time that the filament enters the print head by carefully analyzing the gcode. The Palette sits off to the side and does not connect to the printer, so theoretically it could be used with any 3D printer. So why were they using the Palette with an M2? Because it's one of only a few 3D printers that's accurate enough to guarantee that synchronization between what's in the gcode and what comes out of the nozzle.

There were lots of ideas on 4-color (and 5-color) printing at the show. No indication that anyone is coming up with a cheap scheme for color blending, though. But doing things in different colors on thin enough layers, it all blends together pretty well from a short distance away. Vases changing in hue from bottom to top were clearly in vogue (partly because you can print a number of single-walled vases at one event). 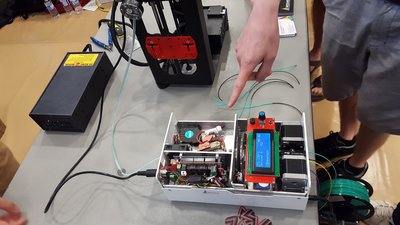 Thank you Vicky and Tim!!!
Top

You are very welcome! I had a fantastic time (though most of my time was spent upstairs at Registration).