Hey, I want to get some flexible filament for a couple of uses.
One is to print some stepper motor dampers. I don't like the Steel/rubber/Steel type I have, which only attach in 2 places to the frame and are rather thick making the cog end up near the end of the shaft. I realize a 1.2 mm gaskets between the motor and plate are not going to do as much noise elimination with the screws still in direct contact (or maybe with a flexible washer under the head) as a regular damper. But I am figuring the shaft will not be offset with the belt tight and 4 screws holding the motor.

So I need something that will absorb vibration but deal with the heat produced by the motor.

The other use would be the digits on a prosthetic hand or maybe a cover for the digits. I assume the flexible stuff has some tack to it more so than any of the normal hard plastics. Currently Lee Nail Tippi gells are recommended to cover the fingers https://www.amazon.com/gp/product/B0031 ... 2681K29930

So I see filament with a hardness of 85 and some at 95, I assume I want 85 for both applications?

Was going to grab some Ninja Flex but at $85 I don't want to choose wrong..
I see several other brands on amazon with smaller amounts (which would be good) but most were SH 95 and not recognizing the manufactures names as any of the big common companies I was a bit unsure if it would be a waste of money.

Edit, found the ninjaflex splash spools so I ordered a roll of black to try it.. still want to know what you all think about the options and what you have luck with.. Will be using the M2..

Thanks in advance!
Doug
Top

Got the Ninjafles.
Managed to get it to print but not really well. I guess most of the issue is the filament drive. I have adjusted the tension to get the best flow and have the spool suspended over the printer for gravity assist. Print speed is 10mms, temp 230, no retraction, .5 nozzle .2mm layer height..
Still get missed sport and rough finish.
The parts I am printing will work as is (Nema 17 Dampers) but I would like to get this working a bit more consistently if anyone has any other tweaks.. S3D is the slicer.
Thanks!
Top

Printing flexibles requires a little bit of a different setup.
You are going to want to switch to a .50 nozzle.
Suspend the filament above the printer and "Gravity feed"
Slow down to about 600 mm/min.
~Jason from MakerGear
Top

6mmS .. Ok, had it running at 8 and it seemed to work better a bit faster. Just finished a spool center for the little slash spool to put it on a dowel above the printer..
Also, the NinjaFlex dampers work fairly well, not as good as a real damper for noise, but a good amount of noise reduction "without" the shaft issues of the other dampers. I only made the damper or Gasket is a better term 1mm thick.. Longer screws are needed to go thicker.
Thanks for the input going to do some more testing tonight.

Is this about as good as it get? 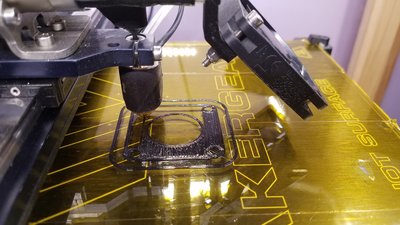 This good for Gravity feed? 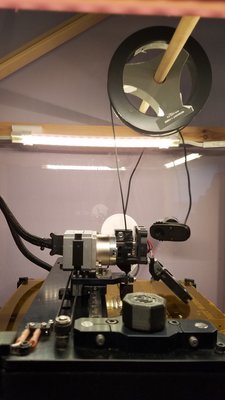 @airscapes - what is the height from the bottom of the pool to the extruder with your setup? I'm building pvc gravity holder for my ninjfflex /tpu filament and trying to see how high up the pvc rods should be

This should do the trick 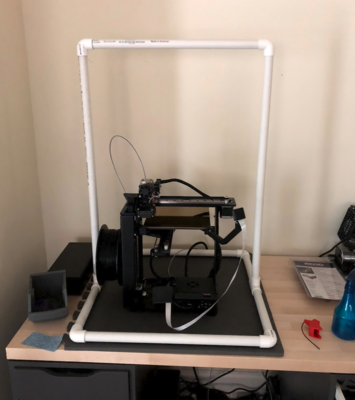 Great idea! I will have to use that!
Top

Try TPU it has a hardness rating of 95 and is much easier to print. I use the same settings as pla. Have been using it for some time on my M2 and it works great as a damper or as a surface to bounce against the wall. Would be fine for finger tips. Used various vendors all work well. Sticks to glass with glue stick fine.
Top
Post Reply
12 posts