I bought a spool of the eSUN wood filament from William at Intservo, and he's been begging me to try it out and post a review on Amazon. Today I found out why---somebody posted a one-star review back in March, which is currently the only review for the filament. It was one of those reviews that basically just says "awful stuff" and doesn't even go into details. I'm mostly copying this post from the Amazon review I just submitted.

This is the first time I have worked with any wood filament, and I can't say enough great things about the eSUN "Woo 3D", except maybe that the name is a blatent rip-off of the original Laywoo-D3. The point of wood filament is to be sandable and stainable, and this filament excels at both. Parts fresh off of the printer have a fairly rich beige tone that's not half bad by itself. Unfinished, though, it looks a bit like plasticized balsa (see photo). A quick rough-up with fine-grid sandpaper or steel wool gets rid of the plastic look, and staining makes it difficult to tell apart from real wood. . . from a distance. The filament layers give it a sort of grain, but it's a bit too straight and evenly spaced to look natural up close (you can see this from the other photo, although honestly, the photo doesn't really do it justice. Also I haven't done the second coat of stain and polyurethane gloss coat yet). The weight is like balsa, much lighter than any other plastic I've worked with, so if you want it to feel like wood as well as look like it, you'll have to weight it internally. As far as printing, it was as easy to work with as any PLA I've used. No jams on my 0.35mm nozzle, although I've heard that jams can be a problem with some wood filaments. The stuff is very, very stringy, so aggressively dialing up the retraction distance is recommended. But at its worst, a little sandpaper gets rid of the strings completely.

I've heard that when printing, wood filaments will make the room smell like a carpenter's shop. This stuff has no smell at all. It makes me wonder if there's any wood in it at all. It may be related to some filament I got from a Kickstarter campaign a year (or more) ago (a company called Polymakr, see
http://www.polymaker.com/shop/polywood/), which got its wood consistency from some sort of foam structure to the plastic. I have no idea if the eSUN stuff has real wood in it or not, but as long as it has the right look and feel, and doesn't jam the printer, and is trivially easy to work with, I'm not complaining. This stuff is fun to work with! 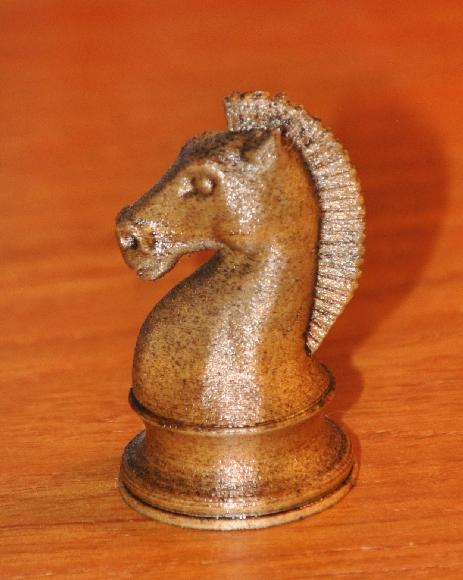 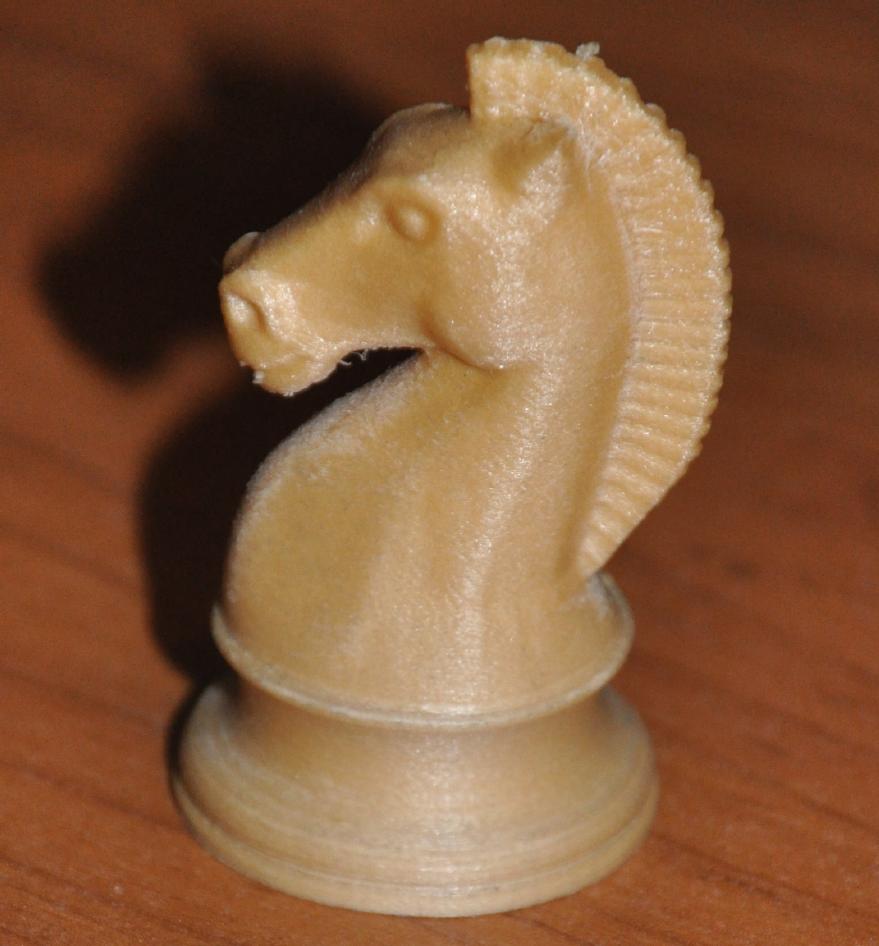 After a second coat of stain and a semi-gloss clear coat, the result looks a bit more like wood but still has this speckle pattern to it that makes it look a bit artificial. As I mentioned before, it looks pretty good from a distance, but obviously the photo is very up-close-and-personal. Part of the problem is that the stain I used is very dark. I will have to try a lighter stain and see how that looks. But this is for a chess set; one side has to be dark! (I have a chess set with the colors in silver and gold, and I never play a game with that set because I can't tell which side is which!)

The other pieces, by the way, are the bronze filament. The filament makes a good base color but it looks much better after being painted with Testor's gold enamel. The base color lets me get away with a single light coat of paint for a darker finish. 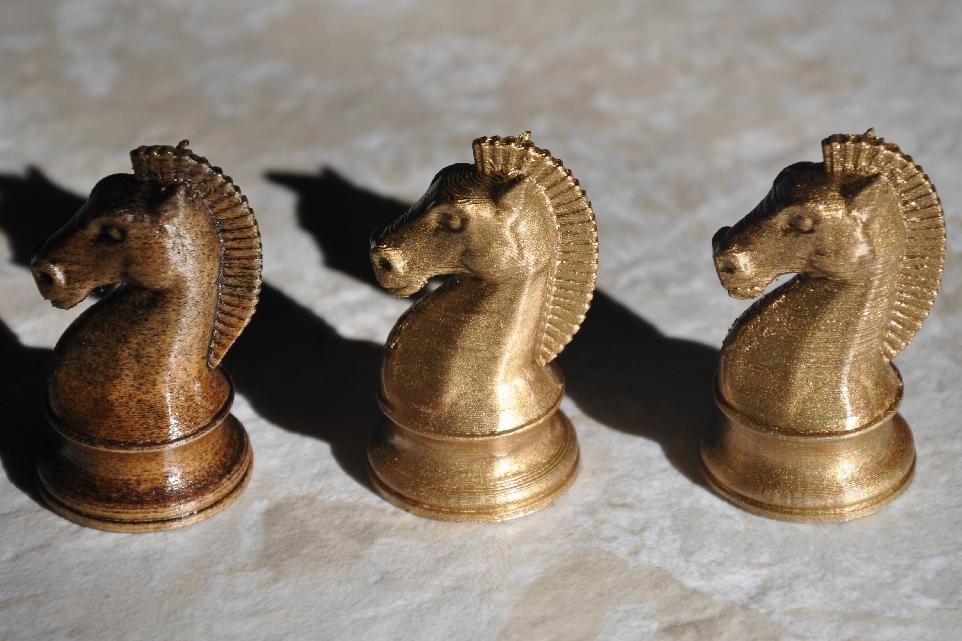 Can you make a post in my filament thread about printing with the bronze stuff?
Custom 3D printing for you or your business -- quote [at] pingring.org
Top

I personally like it the way it is with the second coat of stain.

If you want a more uniform dark colored piece, I got a surprisingly good result with simple Sharpie Permanent markers. You'd likely wind up flying high as a kite if you tried to do more than one chess piece at a time, but a Dark Brown Sharpie base with Magenta on the highlights comes out looking like mahogany - it's very even. Top that with the clear coat and I'll bet you couldn't tell it was printed even up close and personal.

This is one of the failed ring prints colored up - no sanding or anything. Looks good enough to use, and now I think I might color the good ones for contrast on the barrel - might jazz it up a bit. 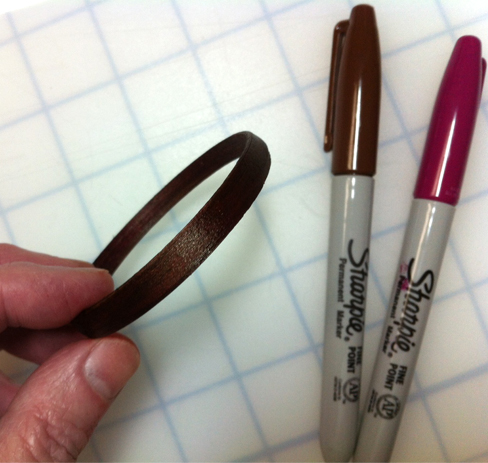 Here is my photo with one of each of the pieces from the chess set. All pieces were finished with two coats of stain and a semi-gloss coat on top of that. Interestingly, the pieces look much more like real wood when printed sideways. The original knight piece, and the rook in the photo, were printed in one piece, standing upright, and have a speckled pattern that looks just a bit synthetic. The pieces that were printed in halves have a dark line where the stain seeped into the seam, which is a bit more visible than I would have liked, but not too bad. 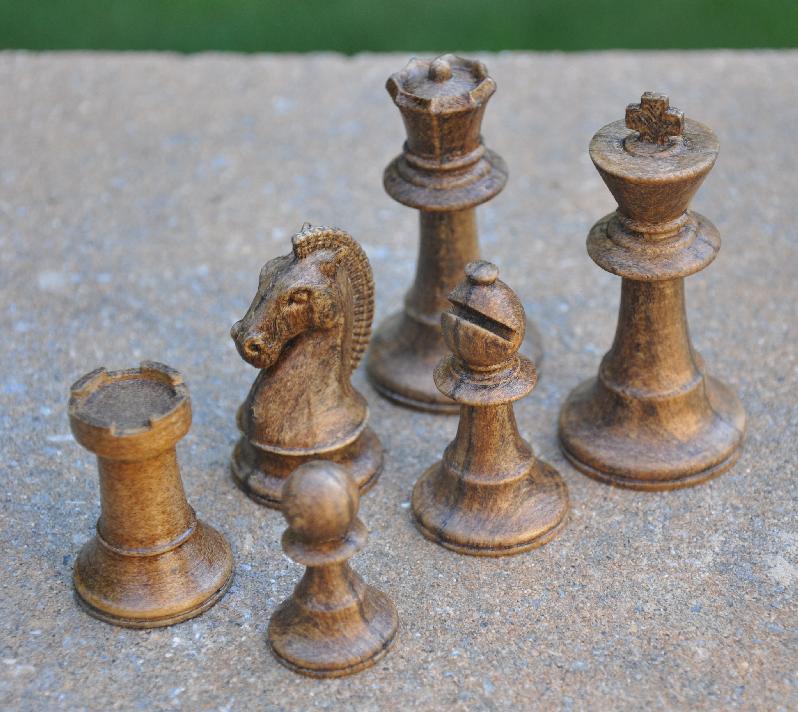 They turned out great tim!

(The darker seams make it look a bit like marbled wood.)
Top

The darker seam is perfect, that's what those should look like.
Custom 3D printing for you or your business -- quote [at] pingring.org
Top

I like the seam. Gives them some character.
Top

I came here to give a quick update on petg black/white but surprised to see two threads about wood filament. Thanks Tim and Jules. And thank you two for providing real experience reviews on Amazon.

Bamboo is considered as a sustainable wood material

and is plenty in ESUN CEO's home town. Although I don't know the actual formula, using bamboo makes a lot sense there.

that does look fantastic tim. now i need to go out to the shop and put some stain on this little horgah'an.
Top
Post Reply
13 posts