The place to discuss your hardware and software/firmware modifications...
Post Reply
9 posts • Page 1 of 1

After discovering that opened filament stored in the garage absorbed moisture and produced crummy (term of art) prints, I diced around with how to keep it dry. As always most of the solution was readily available at home depot. I had read that a container with a 25 watt incandescent light bulb would do the trick, but that was too simple for me. I wanted to know what the humidity was in the 'vault'.

I bought a 'homer' bucket, a screw in lid, a standard light bulb socket and a 25 watt appliance light bulb.
I bought a "Hurrah" Feather micro controller (has wifi built in), a temp-humidity sensor, a Feather relay (for turning lightbulb on and off), and a Feather OLED display from the good lady at AdaFruit.com

I modified the Arduino code which Ms Ada publishes on her website so that I could read the temp and humidity and turn the light on and off from anywhere with internet access. And, Voila, it works. It can handle 3 spools at once and maybe if I replaced the desiccant tin with the little bags, I could get a fourth spool in there. It was able to restore a spool of ESun PLA to it's original condition (or close enough) which had been producing really ugly blistery prints. 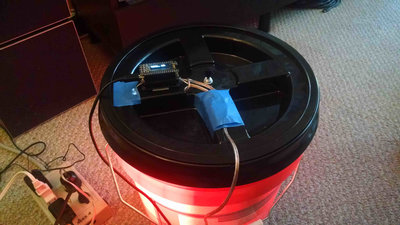 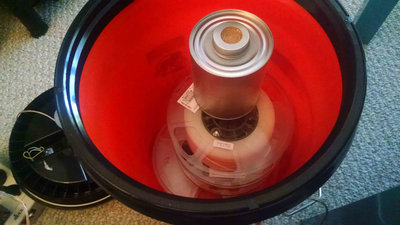 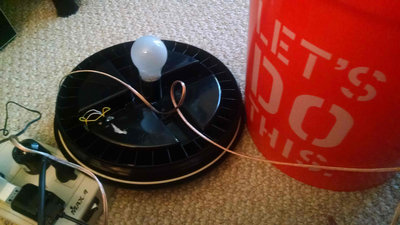 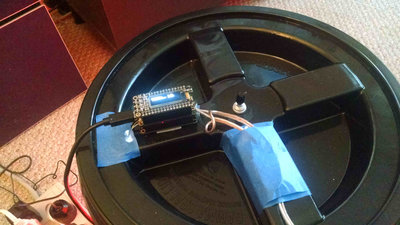 The humidity sensor has a +/-3 percent accuracy, so i cannot know the specific humidity in the container. The light-bulb is sufficient to get the temperature in the bucket up to 115F. At 115F the relative humidity will get down to less than 5% which means something like 10% at normal room temperature. Cost was something like $70 for everything. it is controllable via io.adafruit.com web site where I constructed a 'dashboard' for viewing the humidity-temperature data stream and have a switch for turning the light-bulb on and off.

Another thing you can add is three/four John Guest fittings in the lid. You can have tubing run from the fitting directly to your printer, and when not using a strand of filament, you can cap off the tube to prevent outside air from reaching the container.

Sounds like a pretty good idea. I was completely blown away by how well this thing restored what had been a reel of "PLA gone bad" to as good as it was when I took it out of its original wrapping. It appears to take less than 24 hours to get this result. The relatively low cost of design mistakes using 3d printing has probably increased the number of iterations on my projects, but because of the complexity of the designs, I may go a couple of weeks between printing sessions so it makes sense to return the reel to the vault during the offline interval.

I suppose I'll grow out of this, but right now it's so neat to be able to dial up the Adafruit dashboard, and see what the temperature and humidity is in the vault and then turn on the light bulb if I think it needs to be jogged a bit. I don't have any idea how the desiccant canister is going to hold up. So far there is no evidence that it is loading up. I could do this from anywhere in the world -- almost.
Top

This thing may not be as clever as I thought. After drying (I think) 8 or 10 spools - most of them less than half full, the time required to reduce the humidity in the bucket started to climb and then it wouldn't go down at all even if I left the heat on for days.

The granules in the desiccant tin hadn't changed color, but my guess is that they weren't working as well as they had been.

The cure for partially saturated desiccant seems to be to heat it up to 250F for a couple of hours in the oven. But then what?

If I let it cool off in the oven, it will start to absorb moisture again before i can get it back to the bucket. My idea is to remove it from the oven while hot, and place it in a polycarbonate oven bag ( the kind turkeys can be baked in). seal the bag as best i can without getting burned. When the thing has cooled off enough to handle, put it back in the bucket with 4 rolls of filament and see if the system then works as it did in the beginning with the light-bulb heating the contents to 44C and the humidity at that temperature starting at 15% and going down to 6% or 7% at that temperature which is enough.

When the light-bulb is turned off, the bucket cools to ambient (25C -in the garage) and the humidity climbs to 12 to 14% which seems to be dry enough for the filaments to print well.

Can anyone see anything stupid here?
Top

Maybe a combination of "dry" storage (spools in bags with desiccant/inside a bin with some sort of seal) and a dehydrator for a few hours before you use the filament (see forum for recommendations) would be simpler?
Top

6 ways to Sunday to keep your plastic dry, looks like this worked out fine for you, was a fun project and nicely done!
As was mentioned a food dehydrator ($60) will fix a wet spool over night and dry out desiccant at the same time. I store my dry spools with desiccant in Dollar Store Vacuum seal bags. The bags don't last forever but they are inexpensive and no air = no moisture. If I am printing 16 hours a day for a few day, I just pop the spool in the dryer over night when the prints start to get a little stringy..
Top

Well I over did it, no doubt about that. I need to look at food dehydrator. thanks for your thoughts on this.

No snark intended. I'm mostly too lazy/inept to try projects like that.
Top

it's ok mathisyourfriend. I spent a career designing stuff. but my wife is better. we once had a problem with cabinet doors which wouldn't close properly. My solution required four pulleys, some sash cord, and weights as well as plastic tubes for the weights to travel in.