I've been trying out some of the larger size filament spools due to the amount of time and wasted filament you save with these. So far I've only found two suppliers that deviate from the standard 1Kg spool: Gizmo Dork with their 5Kg spools and Push Plastic with their giant 10Kg and even 25Kg spools. The Gizmo Dork PLA was very low quality however, to the point where it is almost unusable except for very crude and low tolerance prints. Their spools are also flimsy and the flanges are easily broken off during shipping, which forces you to return the spool due to being unusable. The Push Plastic PLA seems to be better quality though and their spools are much more rugged. It's still not as good as e-Sun PLA+, but it is at least usable and they have a lot of color choices and filament types (as opposed to Gizmo Dork who only seems to have black and white, with the "white" being a pretty stale looking off-white).

The lure of being able to print for two weeks continuously on a single 10Kg spool with no changeouts is pretty attractive, and the partial spool waste would only be 1/10th of a standard 1Kg spool. Why there aren't more companies offering these large spools for larger print farms is beyond me. Granted there are some mechanical challenges to overcome with using them, such as how to mount such a heavy spool and deal with inertia issues. I had to make metal axles with ball bearings for the 10Kg spools, since the friction of trying to just spin it on a fixed axle becomes too much for the extruder to pull on. A 5Kg spool is still light enough to spin on a fixed bar, but 10Kg becomes too much. But with a low friction roller you run into another problem where the inertia of the spool can cause it to keep spinning when you don't want it to. Since an overhead mount can not use a bowden tube, the filament passes directly from the spool into the extruder and pulls a straight line. There is a scenario where if there is tension on the filament and the extruder is all the way at one extreme of it's range and then zips all the way over to the other side of the plate, it can pull the spool and start it spinning several turns. This in turn creates big loops of unwinding filament that can then catch on things and jam the spool. So some friction has to be added back into the roller bar to keep this from happening. I've had good luck with a printed adjustable clamp that fits on one end of the roller bar, with a screw that controls the friction on the roller.

This is still a work in progress, but it looks promising. The amount of filament we were having to throw away in the form of partial spools was substantial. We do mostly large prints, so there's no easy way to use a spool once it has 20 to 30% of filament left on it. 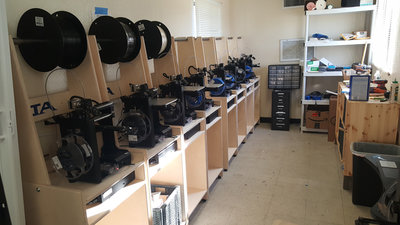 I added filament runout sensors to my printers, now I just let them run until the 1kg spool runs out. The print pauses and waits for me to change out the filament, and everything works as I'd hope.

With a simple print and a drill, you can also reload the 1kg spools from a 25kg master spool, too. This will let you use all the stock hardware and instead manage the spools yourself. It's trading off the design and iterating on spool rollers for 5 minutes with a drill and rewinding a spool.
Custom 3D printing for you or your business -- quote [at] pingring.org
Top

It's easier to just set-and-forget a giant spool that can run for two weeks straight though. We got the damper dialed in on the roller bar and are using 10kg spools without issues now.
Experience is what you get when you didn't get what you wanted.
Top
Post Reply
3 posts • Page 1 of 1