I have two questions about issues with my prints. The first, when I was trying to print this object (http://www.thingiverse.com/thing:14905) in vase mode using Simplify3D the layers didn't stick together and it came out more like a long slinky. I did notice that the nozzle wasn't tracing the pattern of the design but instead would swing out a little wider and then come back and touch the lower layer at the corner. Is this typical of vase mode or is there something I can tweak in the settings to correct this so they layers stick better.

Second question, if you look at the picture in this link https://www.flickr.com/photos/140697517 ... ed-public/ I had issues on the bottom of the print but then it seemed to correct itself as it went up. I had a similar issue with another print with similar design where the bottom layers had some issues but then it got better as the printing continued. What would cause this issue to happen? Both items were similar shape.
Top

Vase Mode works best (at all?) with models that have single-thread walls. Rather than trace an entire layer at a single Z height and make an abrupt change to the next layer, the extruder moves gradually upward during the entire layer to eliminate the seam.

That model has thick walls that require several thread widths, so the slicer may be merging vertices on the inside and outside surfaces as it tries to figure out which surface to follow.


issues on the bottom of the print

Unfortunately, the severe overhang angle on those layers means there's nothing supporting the plastic threads in those layers: they droop uncontrollably. In round numbers, a wall inclined much more than 45° from the vertical won't print nicely.

Setting the slicer to print interior perimeters first may help, because the final exterior perimeter thread will stick to the freshly laid interior one and not droop quite so much. That might get you to 60° from vertical and (probably) won't make much difference beyond that.

You can add support under those surfaces, which segues directly into the "How do I remove the scars from supported layers?" discussion... [grin]
--
Ed
http://softsolder.com
Top

Adding support to the object fixed that issue. I ran into another where I am getting a vertical line on the side of a round object. Is there a setting I can tweak in simplify3d to see if it will get rid of it? There is a similar line down the opposite side. 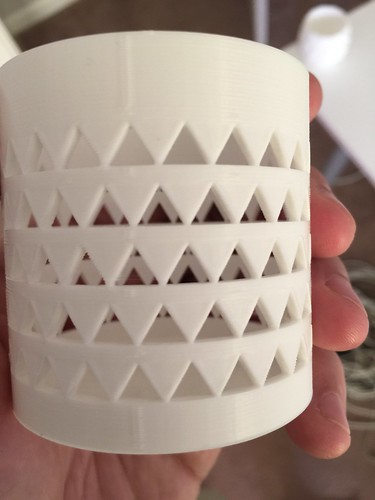 Did you also print that in Vase Mode?

Vase Mode is generally used on solid filled objects, not vases. Vase Mode will turn a solid object into a vase, by eliminating everything on the side walls with the exception of a single extruded row.

If an object has already been created as a vase, just use a regular printing mode to print it.
Top

The one with the triangles was not using vase mode.
Top

The side seam can be "fixed" by turning on random layer start points. Of course, then you usually get zits evenly distributed across all your surfaces, which I find more objectionable than a single seam. If I want a seamless print, I will generally slather on a layer of primer or XTC-3D epoxy, then sand it down.
Top
Post Reply
6 posts • Page 1 of 1

Return to “Getting Started”