My daughter is studying whales at school, so I decided to print her one to take to class: http://www.thingiverse.com/thing:182337

With previous versions of Simplify3D, I had random infill turned off as it would tend to disturb the seam placement and make it look messy. That would have turned the visible interior of the whale into a checkerboard honeycomb. With the latest version, you can place the layer start explicitly, so I turned that back on which gives the visible infill a mottled, almost organic texture. I was going to coat it in primer, but I think it looks fine as is. 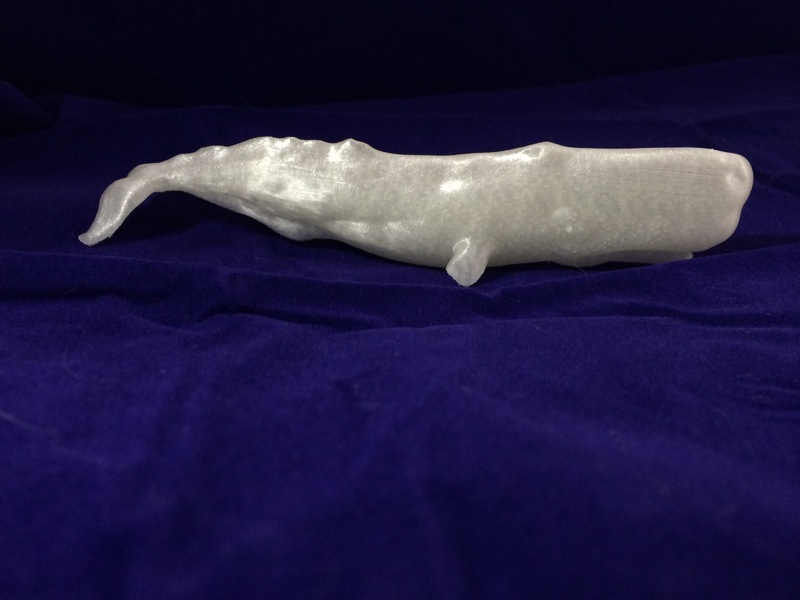 Looks good.
I need to get some Natural PLA I like the look.
Top

Really? I think it (natural PLA) looks awful! This is the only print I've ever done in natural PLA that has come out remotely good looking. Also it photographs terribly, and tends to make things look like they were made out of bird's nest soup.

I have a roll because it was like a dollar cheaper, and I'm trying to use it up as quickly as possible to get rid of it.
Top

I have only had my printer about a week. This is the only thing I have seen printed out of Natural PLA.
I will look at more things printed out of it before I order any.
Top

Awesome print! So you changed the exterior seams to start somewhere in a less conspicuous place? I'm trying to figure out how that changed the infill look. Can you clarify?
Top

The reason I didn't like to use random infill is because it had the side effect of moving the layer start point around, even if you had randomize layer start turned off. With the new setting, that is no longer an issue so I turned randomize infill back on and that has the pleasant effect of making natural PLA look less than awful.
Top

What layer height did you use, and how did you generate support?
Top

Pardon my ignorance, because I still use slic3r, but what does it mean that you have extended the supports by 1mm?

I keep leaning more and more toward giving up on slic3r and getting S3D. I like to give open source solutions a chance, but I have become so discouraged with slic3r's inability to generate decent support structures that I now generate all my support structures by hand along with the rest of the model. It works, but it's a big time-waster. It looks like S3D does a very good job of figuring out where the support needs to go. Slic3r, on the other hand, just seems to get worse over time.
Top

Tim, in the new version you have a setting to take your selected supports and inflate them a bit to cover that in between gap that can get missed from the end of one support to the start of the next one.
Top
Post Reply
21 posts