How much gantry curvature is too much?

How much gantry curvature is too much?

I'm just about to embark on the BLTouch mod for my M2 Dual, but want to sanity check first.

I'm doing it because I'm having trouble getting good first layers across the entire bed -- either the center is squished to paper thin, or the edges don't stick.

My print bed is 0.25" MIC6 that I have triple-checked is as flat as can be measured. But in careful measuring with a dial indicator, it sure seems like both my X and Y axes have decent warps. If I get the very X+Y center calibrated to 0.0 on the dial indicator, a map of bed height readings is:

(That's the center, four corners, and midpoints along four sides)

I'm wondering if I should tear down the rails and scrub/solvent underneath them, or if this level of variation is normal and I should just go straight to BLTouch to compensate.
Top

then I measure if they are really 2mm usually I get a range between 1.89-2.04 (I try to squish them a little)
so more o less I know there is a variance of 0.15mm overall.

sometimes I am lucky and it goes between 1.96-2.01 (0.05mm overall) and is the same place so the place even if is the same sometimes is more level then other I just think it's overkill try to get a perfect place just placing it every time will give a different result so I went back to glass with PEI on top it may not be perfect flat but honestly I get same exact result and much easier to have piece stick to it without too much effort

(and heat up faster too)
Top

I have had two M2 printers - the first was returned under warranty - but both needed to have the X rail shimmed to get a good first layer on large parts. I haven't seen any significant issue on the Y axis.

One thing I'll say about using an indicator is that even with the Rev E 4-point support the bed flexes pretty easily even with just small loads. I was using a cheapo plunger-style dial indicator - something like this: https://www.amazon.com/Triton-Indicator ... B016R3GLB0

I opened it up and unhooked the return spring on the plunger and I found i got much better readings without that spring force.

I don't have notes from both printers, but on one of them i put .009" (.23mm) of shim in the center of the rail by the time I extrapolated the dip out to the ends. I use .001" and .005" plastic shim stock and placed smalls stacks on either side of each screw. Fiddly work, but made a huge improvement in the first layer. 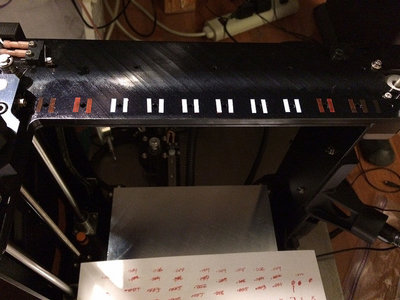 I'm still digging into this in the interest of fixing this once and for all and being able to print edge-to-edge on the first layer. Here's what I've done:

- Set up BLTouch and configured Marlin to sample a 15 x 15 grid
- Modified Marlin so each sample point takes 9 samples, throws out the lowest and highest, and takes the average of the remaining 7
- Let that run for a while, collected data
- Analyzed in Excel to isolate X curvature at each Y position, Y curvature at each X position, and variation of each point from the combination of those two

I mounted the BLTouch off the right side of the second extruder, so it cannot measure X < 57.

These are the measured values (0 is approximately E0 nozzle height; more negative numbers represent bed surface being farther away from the nozzle):

So I've got significant curves on both X and Y axes, each one contributing a little over 0.1mm, for up to 0.23mm variation across the measurable area. X probably gets even worse between 0 and 57.

Over the next day or two I'll do a teardown and clean of both X and Y (maybe debris somehow got under the Y rail?), re-measure, and shim along the lines of what Zemlin did. I'll probably also test with just the borosilicate glass in case some of the error is being introduced by my MIC6 + PEI bed.
Top

honestly, my favorite is the glass+pei I never found any advantage to use MIC6 only disadvantage so now it's sitting as a paperweight
Top

I hear ya, just been trying everything to get edge-to-edge level.
Top
Post Reply
6 posts • Page 1 of 1